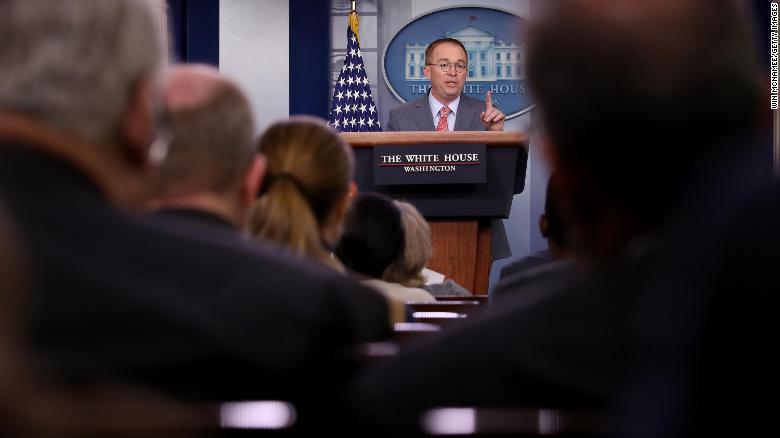 Weeks of White House talking points were upended today when acting White House chief of staff Mick Mulvaney, in a press conference, confirmed that the White House tied U.S. military aid to Ukraine to a demand that the nation investigate a Trump and Giuliani-led conspiracy theory intended to boost Trump’s political chances by alleging Democratic “corruption.”

New York Times: “It was the first time a White House official has publicly acknowledged what a parade of current and former administration officials have told impeachment investigators on Capitol Hill.”

President Trump’s external legal team is now trying to distance itself from acting White House chief of staff Mick Mulvaney’s press briefing today, where he admitted a quid pro quo in delaying of military aid to Ukraine. Said Jay Sekulow to CNN: “The legal team was not involved in the Acting Chief of Staff’s press briefing.”

“Acting White House chief of staff Mick Mulvaney on Thursday revised remarks he made in a press briefing earlier in the day, now maintaining that there had been no quid pro quo between the hold the administration put on aid to Ukraine and Ukraine’s cooperation on an investigation into allegations surrounding a Democratic National Committee server in 2016,” the Wall Street Journal reports. Said Mulvaney: “There was absolutely no quid pro quo between Ukrainian military aid and any investigation into the 2016 election.” Too late, Mickolaus.

Acting White House chief of staff Mick Mulvaney said during a press briefing Thursday that next year’s G7 summit will be hosted at the Trump National Doral Miami resort, Axios reports. More corruption in the open.

New York Times: “Rick Perry, the energy secretary who has drawn scrutiny for his role in the controversy surrounding President Trump’s efforts to push Ukraine officials to investigate the son of a political rival, on Thursday told the president he would resign from the cabinet.”

“The Perry resignation had been anticipated for several weeks, even before the news emerged of his involvement in efforts to pressure the new president of Ukraine, Volodymyr Zelensky, to investigate a company that had worked with Hunter Biden, the younger son of former Vice President Joseph R. Biden Jr.”

Vice President Mike Pence announced from Ankara on Thursday that Turkey has agreed to cease its military operation in northern Syria until Kurdish forces can withdraw from the area, Axios reports.

Meanwhile, “on Wednesday, the U.S. military said two F-15E jet fighters carried out an airstrike to destroy an ammunition-storage facility, latrines, tents and other parts of the Syria headquarters of the American campaign to destroy Islamic State after pulling its forces from the base,” the Wall Street Journal reports.

“The decision to target the base, which included warehouses used to train-and-equip the Kurdish-led fighters, came after Turkish-backed forces moved on the facility on Tuesday.”

William McRaven: “If our promises are meaningless, how will our allies ever trust us? If we can’t have faith in our nation’s principles, why would the men and women of this nation join the military? And if they don’t join, who will protect us? If we are not the champions of the good and the right, then who will follow us? And if no one follows us — where will the world end up?”

“President Trump seems to believe that these qualities are unimportant or show weakness. He is wrong. These are the virtues that have sustained this nation for the past 243 years. If we hope to continue to lead the world and inspire a new generation of young men and women to our cause, then we must embrace these values now more than ever.”

“New details from Kurt Volker’s closed-door interview indicate Bill Taylor, the acting ambassador to Ukraine, was deeply conflicted about whether to take the job because of concerns about Rudy Giuliani’s shadow involvement,” Axios reports.

“The testimony by Volker, the former special envoy to Ukraine, earlier this month may help the president in the sense that it paints Giuliani, not President Trump, as the mastermind behind a campaign to get foreign leaders to investigate the Biden family and Burisma.”

“Taylor was also worried that Trump might be willing to trade away Ukraine’s interests as part of a grand bargain with Russia.”

In a fiery speech on the Senate floor, Sen. Mitt Romney (R-UT) called for Senate hearings into President Trump’s decision to withdrawal U.S. troops from Syria.

Said Romney: “So America is diminished, Russia, Iran and Assad are strengthened. And so I ask, how and why this decision was reached.”

He added :”Was there no chance for diplomacy? Are we so weak and so inept diplomatically that Turkey forced the hand of the United States of America? Turkey?”

Politico: “For the first time, they’re receiving a gusher of evidence to support charges that President Trump abused his power for political and personal gain, pressuring Ukraine’s fledgling government to investigate his political rival Joe Biden.”

“But as more witnesses come forward to spill more secrets, the more Democrats are nervously eyeing the dwindling congressional calendar and wondering: When should we be satisfied with what we have and bring articles of impeachment to the floor?”

“The Democrat, known for his devotion to Baltimore and civil rights, and for blunt and passionate speechmaking, died at Johns Hopkins Hospital.”

“Senate Republicans are preparing for a speedy impeachment trial that concludes before the end of the year,” Politico reports.

“Senate Majority Leader Mitch McConnell told Senate Republicans on Wednesday that he expects Speaker Nancy Pelosi to approve articles of impeachment as early as Thanksgiving… McConnell then surmised that the Senate could deal with the trial by Christmas, concluding the impeachment proceedings before the Democratic presidential primaries begin.”

“Gordon Sondland, the U.S. ambassador to the European Union, told House impeachment investigators Thursday that President Trump urged him to work with his personal lawyer Rudy Giuliani on matters related to Ukraine, the Washington Post reports.

“The revelation came as Sondland, a key figure in the probe, appeared behind closed doors to testify about Trump’s efforts to pressure Ukraine to investigate former vice president Joe Biden and his son Hunter Biden at a time when nearly $400 million in military aid was being withheld.”

Politico: “Sondland’s testimony has the potential to be the most devastating yet for Trump’s defenders.”

NBC News: “Lawmakers planmed to grill Ambassador to the European Union Gordon Sondland on Thursday about a private discussion he had with top Ukrainian officials in the White House in which he explicitly mentioned the Ukrainian gas company linked to Hunter Biden, amid negotiations over granting Ukraine’s new president an audience with President Trump.”

“Sondland’s meeting with the Ukrainians just steps away from the White House Situation Room came minutes after a larger West Wing meeting that included then-National Security Adviser John Bolton, who had been noncommittal about scheduling a meeting between Trump and new Ukrainian President Volodymyr Zelenskiy. Sondland directly contradicted Bolton by telling the Ukrainians that in fact, Trump was committed to meeting with Zelenskiy on the condition he open a corruption investigation.”

Vanity Fair: “Traders in the Chicago pits have been watching these kinds of wagers with an increasing mixture of shock and awe since the start of the Trump presidency. They are used to rapid fluctuations in the S&P 500 index; volatility is common, of course. But the precision and timing of these trades, and the vast amount of money being made as a result of them, make the traders wonder if all this is on the level.”

“Are the people behind these trades incredibly lucky, or do they have access to information that other people don’t have about, say, Trump’s or Beijing’s latest thinking on the trade war or any other of a number of ways that Trump is able to move the markets through his tweeting or slips of the tongue? Essentially, do they have inside information?”

Jonathan Bernstein: “Every once in a while, some event offers a clarifying reminder of the president’s poor judgment. On Wednesday, it was the release of a letter Trump wrote to Turkish President Recep Tayyip Erdogan. The letter itself was an embarrassment…”

“But what really underlined Trump’s problem for me wasn’t that he wrote an incompetent letter to follow up on what seems to have been an incompetent phone call. Or that his Syria policy has resulted in chaos and death. Or that, on a crass political level, he’s managed to alienate his congressional allies just as he needs them most, with House Republicans voting overwhelmingly on Wednesday to condemn his decision.”

“No, what really got to me was that Trump distributed copies of this letter to congressional leaders when they showed up at the White House for a briefing. Think of it. Even if the letter had been perfectly normal, what Trump was handing them was an Oct. 9 request to Erdogan to halt his invasion — a request that Erdogan has, as we’ve seen, totally ignored. Trump was bragging about what he considered to be a sign of his own brilliance without realizing that it was instead evidence of abject failure.”

Philip Bump: “There are a number of remarkable lines in the letter President Trump sent to Turkish President Recep Tayyip Erdogan this month. But it’s a relatively unremarkable one that may be the most revealing.”

“‘I have worked hard to solve some of your problems,’ Trump writes at the beginning of the second paragraph. It’s not as splashy as ‘Don’t be a fool!’ but it’s more interesting. What, exactly, are those problems Trump has been working to solve?”