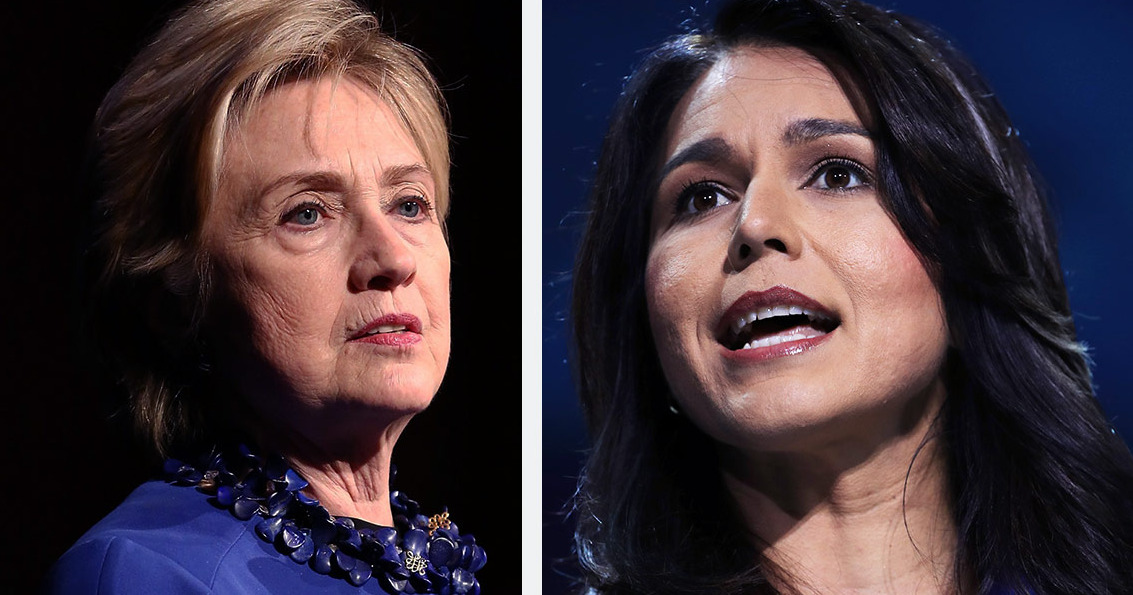 Hillary Clinton said the Russians are currently “grooming” a Democrat running in the presidential primary to run as a third-party candidate and champion their interests, CNN reports.

The comment appears to be directed at Rep. Tulsi Gabbard.

Said Clinton: “I’m not making any predictions, but I think they’ve got their eye on somebody who is currently in the Democratic primary and are grooming her to be the third-party candidate. She’s the favorite of the Russians.”

When it was first learned that the Rudy Giuliani associates who were arrested had contributed $50,000 to Florida Gov. Ron DeSantis’ campaign last year, the governor’s spokeswoman described them as donors who DeSantis didn’t know well — or at all, the Tampa Bay Times reports.

Four days later, videos and photos of the men huddled together during DeSantis’ victory party emerged. Additional photos “show an unmistakable ease between DeSantis and the two men, enough to warrant celebratory hugs.”

54 percent of Republicans (and GOP leaners) either think Trump likely did commit impeachable acts, or are not certain he didn’t.

Washington Post: “Bob Iger keeps saying he’s not interested in running for president. At least, not anymore.” “But there’s still a small but influential push in Hollywood to get the Disney CEO to change his mind, according to two entertainment executives.”

“They see him as a successful — and likable — businessman who could actually take on President Trump. And be a more appealing alternative than some of the far-left populists now dominating the Democratic primary — especially as Sen. Elizabeth Warren starts leading in some polls.”

First off, who? Second, we are done with the notion that billionaires are CEOs can be President. Forever.

Politico: “Joe Biden’s advisers have repeatedly downplayed the need for him to win in predominantly white Iowa and New Hampshire — while boasting of his strength in Southern states where black voters often dominate. And the polls, to date, back up their theory that that’s his path to the nomination.”

“But if Biden’s firewall ever cracks — and there are some signs it’s softening in recent surveys — it will likely start with young black women, according to interviews with a dozen African American female organizers, lawmakers and activists who are heavily involved in the Democratic primary election or closely tracking the mood of black voters.”

Politico: “Democrats are building a financial bulwark around their House majority that’s going to be tough for Republicans to breach in 2020. Thirty-three of the 44 most vulnerable House Democrats have stashed an impressive $1 million or more in the bank well before the election year even begins. And their fundraising pace is not slowing down as they gear up to defend the chamber.”

“Federal Election Commission reports filed this week illustrate Democrats’ formidable advantage: The 44 Democrats in the most competitive seats banked a collective $59 million so far. Nearly 30 raised $500,000 or more in the third quarter… And all but six of the so-called ‘frontliners’ have at least half a million more banked than their challengers, if they have any challenger at all.”

BuzzFeed News: “An impeachment trial would consume every senator’s schedule. Under the Senate’s current rules, all senators must be in session Monday through Saturday, starting at around noon each day. The trial may last several weeks — Bill Clinton’s impeachment trial lasted five — thus taking several candidates off the campaign trail the month before the primaries start.”

“In theory, the Senate could change its rules and lighten the schedule. But that would require unanimous consent from both Democrats and Republicans, and that’s unlikely.”

Politico: “The first time Donald Trump ran for president, Karen Pence, the wife of his running mate, rarely hit the campaign trail to stump for the pair. Camera shy and appalled by Trump’s treatment of women, Mrs. Pence surfaced only to support her husband in his October 2016 vice presidential debate and to join him at rallies in the final weeks before the election.”

“But when Trump began asking friends this summer for their thoughts about Vice President Mike Pence, the second lady decided it was time to step up. Fearful that the president might boot Pence — who has long had his eye on the 2024 presidential race — from his reelection ticket, she became eager to assist the campaign as a loyal female surrogate.”