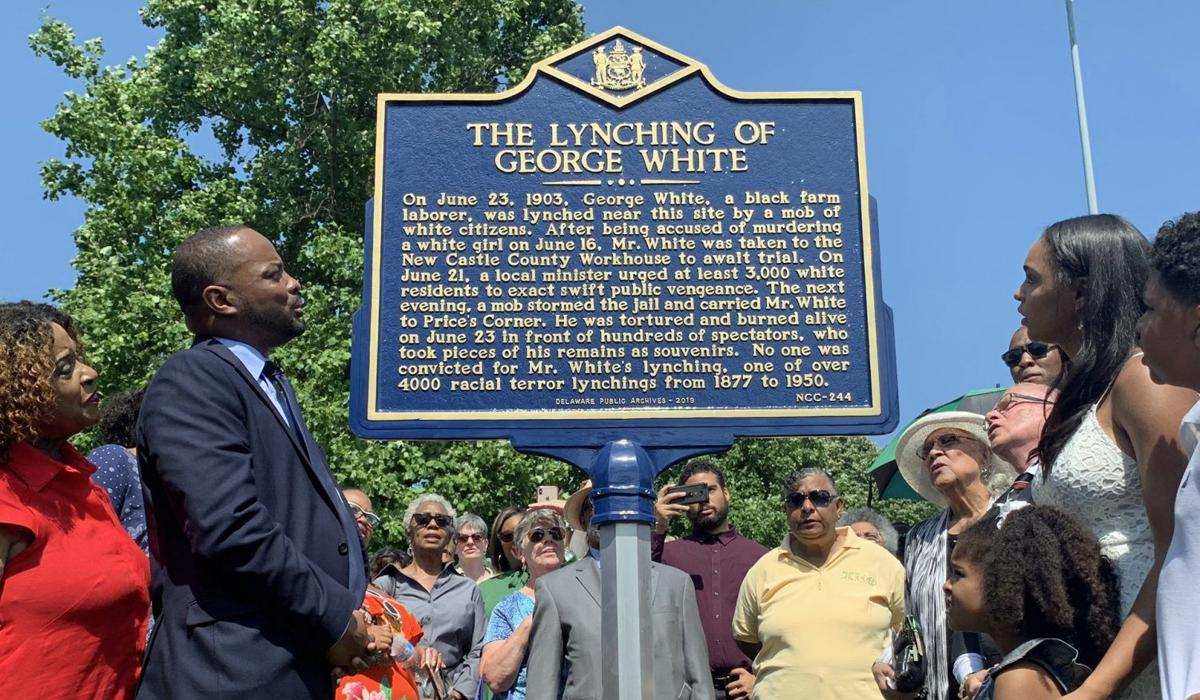 Evil racists destroyed the first historical marker that commemorated the 1903 lynching of laborer George White this past summer. Now a new marker will replace it and will be be unveiled during a special ceremony at Greenbank Park this Sunday, October 20. The ceremony will take place at 3 pm at 250 Greenbank Road, Wilmington, DE 19808

“I have said all along that we will not be deterred by this cowardly and criminal act,” said Sen. Darius Brown (D), chair of the Delaware Legislative Black Caucus. “For centuries, certain elements of society have tried to suppress and erase African-American history. They did not succeed then and they will not succeed now. Their crimes will only serve to bring our community closer and strengthen our collective resolve to ensure that acts of racial terror, such as the lynching of George White, will never be forgotten.”

“We are committed to fighting racial injustice wherever it occurs,” said County Executive Matt Meyer. “The theft of the original marker is a shameful continuation of the history that this marker seeks to acknowledge. By working together to install a replacement, we are showing our county and our state that we will not stand by and allow this dark chapter of our past to be forgotten or ignored any longer.”

The marker commemorates a lynching incident back in 1903. George White had been accused of killing the daughter of Ferris School’s superintendent weeks earlier but denied any involvement in the attack. He was imprisoned prior to his trial. A local pastor, Robert Elwood, delivered a fiery racist sermon that incited the parishioners to riot and to storm the prison. White was dragged out of the prison and then burned alive by the supposedly Christian mob, who then took pieces of White’s charred body home as souvenirs.

Although a documentary has been made about White’s lynching and the story has been repeated over the years by various historians  and  journalists, the incident was largely forgotten by the general public until the original marker was dedicated this summer.

That effort to place the original marker was spurned by Savannah Shepherd, a 17-year-old senior at the Sanford School who first learned about White’s murder after visiting the National Memorial for Peace and Justice in Montgomery, Alabama. The site is the nation’s first memorial dedicated to the roughly 4,300 documented racial terror lynchings of African Americans between the end of the Civil War and the end of World War II. The memorial is operated by the Equal Justice Initiative.

After returning home, Shepherd founded the Delaware Social Justice Remembrance Coalition and worked to get a historic marker placed in the area where White was killed. She approached Sen. Brown, who agreed to cover the cost of the marker and advance Shepherd’s efforts.

“We will not allow this criminal act to make us afraid of having tough conversations and remembering the past so we can move toward a more just future,” said Shepherd, who recently attended the Congressional Black Caucus’s annual legislative conference as a guest of Rep. Lisa Blunt Rochester, D-Del. “Lynching was a tactic used to instill fear in people. We refuse to allow history to repeat itself.”