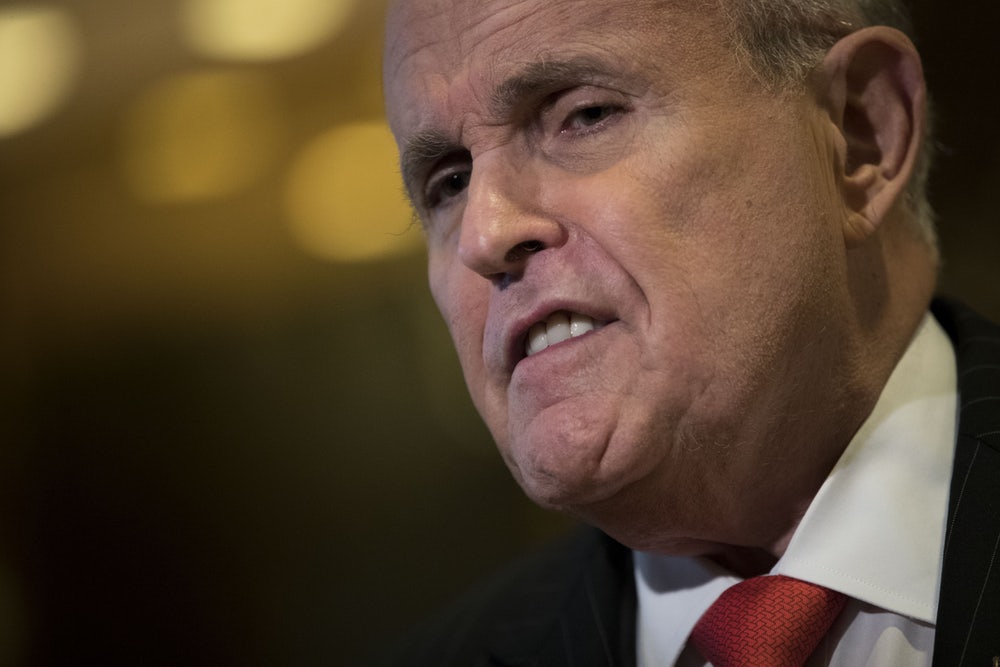 Rudy Giuliani was paid $500,000 for work he did for Fraud Guarantee, a company co-founded by the Ukrainian-American businessman arrested last week on campaign finance charges, Reuters reports.

Rudy Giuliani told ABC News on Tuesday he is not complying with a congressional subpoena and “if they enforce it then we will see what happens.” He went on to say he’s no longer retaining the services of Jon Sale, who was acting as his attorney for this matter. Giuliani told the New York Daily News that he is dropping his lawyer because it is “silly to have a lawyer when I don’t need one.” LOL. As the old adage goes, a lawyer representing himself has a fool for a client.

“And in a sign the impeachment inquiry is widening, investigators were discussing whether to question John Bolton, Trump’s former national security adviser.”

“The effort to pressure Ukraine for political help provoked a heated confrontation inside the White House last summer that so alarmed John Bolton, then the national security adviser, that he told an aide to alert White House lawyers,” the New York Times reports.

“Mr. Bolton got into a sharp exchange on July 10 with Gordon Sondland, the Trump donor turned ambassador to the European Union, who was working with Rudy Giuliani, the president’s personal lawyer, to press Ukraine to investigate Democrats.”

Said Bolton: “Giuliani’s a hand grenade who’s going to blow everybody up.”

Vice President Mike Pence’s office Tuesday said it will not comply with a request from the House to turn over documents related to President Trump’s July 25 phone call with Ukrainian President Volodymyr Zelenskiy, NBC News reports.

“House Democratic leaders are taking the temperature of their caucus as to whether the party should stage a floor vote to launch an impeachment inquiry officially — a move leadership has insisted is unnecessary to pursue their investigation into President Trump,” The Hill reports.

Said a source: “We’re gauging where our members are.”

“Such a vote would mark a sharp shift in tactics, as Speaker Nancy Pelosi (D-CA.) and other other Democratic leaders have argued for months that a vote on the House floor is not legally mandated to launch the impeachment process.”

“Russia said on Tuesday that its military units were patrolling territory in northern Syria between Syrian and Turkish forces after the American withdrawal from the area, underscoring the sudden loss of United States influence in the area and illustrating how the power balance in the region has shifted rapidly in the past week,” the New York Times reports.

“The announcement that Russian forces were now patrolling an area where the United States had maintained two military bases until Monday appeared to signal that Moscow was moving to fill a security void left by the American withdrawal.”

A journalist traveling with Russian-backed forces released a video that appeared to show Russians inside of a now-abandoned U.S. base near the town of Manbij in northern Syria.

Axios: “As the U.S. carries out a sudden, near-total withdrawal from Syria, Russia is rushing into the breach.”

Politico: “The president’s former top Russia adviser, Fiona Hill — the first White House official to cooperate in Democrats’ investigation of the Ukraine scandal — has sketched for lawmakers a trail of alleged corruption that extends from Kiev to the West Wing. In dramatic testimony on Monday, she roped in some of Trump’s top advisers as witnesses to the unfolding controversy.”

“And on Tuesday, a senior State Department official, George Kent, appeared on Capitol Hill to testify about his knowledge of the episode despite an attempt by administration lawyers to block him… The House Intelligence Committee issued a subpoena for his testimony Tuesday morning, and Kent complied.”

“It’s the latest evidence that the White House’s stonewalling against congressional requests for documents and testimony is crumbling — and Democrats are feeling a new sense of momentum.”

Greg Sargent: “Donald Trump’s explicitly declared position in the scandal consuming his presidency is that pressuring a foreign power to ‘investigate’ a leading domestic political opponent absolutely falls within his rightfully exercised authority. Trump has said this, and so has his White House counsel, making this the White House’s official political, substantive and legal position.”

“But this defense is cracking up. That’s because we’re now learning, one after another, that all of the people around him knew that it was grievously wrong — that is, all except for those who were carrying out Trump’s corrupt scheme.”

“As this becomes more public, Trump’s position will grow increasingly unsustainable — not just as a rhetorical matter but also in terms of whether he’ll be able to keep the support of Senate Republicans, his final line of defense.”

NBC News: “Today, the committees are set to hear from George Kent, the State Department official responsible for Ukraine, who was among those raising red flags about Rudy Giuliani’s smear campaign against ousted U.S. ambassador to Ukraine Marie Yovanovitch.”

“Kent reportedly warned in an e-mail to colleagues that Yovanovitch had become the target of a ‘classic disinformation operation.’”

The State Department and White House tried to block George Kent from testifying in the impeachment inquiry today — so the House Intelligence Committee subpoenaed him, Politico reports. Kent is complying with the subpoena.

Daily Beast: “In the course of casual conversations with advisers and friends, President Trump has privately raised suspicions that a spiteful John Bolton, his notoriously hawkish former national security adviser, could be one of the sources behind the flood of leaks against him… At one point, Trump guessed that Bolton was behind one of the anonymous accounts that listed the former national security adviser as one of the top officials most disturbed by the Ukraine-related efforts of Trump and Rudy Giuliani, the president’s personal attorney who remains at the center of activities that spurred the impeachment inquiry.”

“The former national security adviser—who departed the administration last month on awful, mutually bitter terms—is working on a book about his time serving Trump, and has ‘a lot to dish,’ one knowledgeable source noted.”

Wall Street Journal editorial: “What a fiasco. Foreign-policy blunders often take months or years to reveal their damaging consequences, but the harm from President Trump’s abrupt withdrawal of U.S. forces from northern Syria is playing out almost in real time.”

New York Times: “President Trump’s acquiescence to Turkey’s move to send troops deep inside Syrian territory has in only one week’s time turned into a bloody carnage, forced the abandonment of a successful five-year-long American project to keep the peace on a volatile border, and given an unanticipated victory to four American adversaries: Russia, Iran, the Syrian government and the Islamic State.”

NBC News: “Sondland will also testify that after he attended Zelensky’s inauguration in May, he met with Trump, Rick Perry and Kurt Volker in the Oval Office. Trump told them that any in-person meeting between Trump and Zelensky would have to be approved by Giuliani.”

“Sondland will testify that it was only later that he became aware that a public commitment by Ukraine’s new government to address corruption – including Burisma Holdings – was a prerequisite for a Trump-Zelenskiy meeting.”

Washington Post: “For more than a decade, Sondland’s home in Portland, Ore., had been a fundraising outpost for establishment Republicans, candidates he hoped would one day recognize his work corralling wealthy West Coast donors and reward him with a high-profile appointment — preferably, he told friends, an ambassadorship.”

“[Jeb] Bush was the latest to disappoint. Sondland ‘kept talking about it,’ said a fellow Bush donor, adding that ‘2016 was not turning out remotely as we had expected.’ To realize his goal, Sondland made a political about-face and backed Donald Trump, a candidate he once said was out of touch with his ‘personal beliefs and values on so many levels.’ After the election, Sondland contributed $1 million to Trump’s inaugural. And he began calling in political favors — including from Republican National Committee chairman-turned-White House Chief of Staff Reince Priebus — to convince Trump that he could be a team player.”

“President Trump’s former Russia adviser testified under subpoena for roughly 10 hours on Monday as Democrats try to dig into how allies of the president tried to circumvent official policy on Ukraine as part of the impeachment inquiry,” The Hill reports.

“While lawmakers largely declined to comment on the specifics of Hill’s testimony, Democrats asserted that Hill corroborated what they described as a concerted effort by Trump allies who were pushing for the Ukraininan government to investigate the Bidens to remove Yovanovitch from her post in May.”

Wall Street Journal: “Hill and other White House officials grew so alarmed about the administration’s efforts to push Ukraine to open certain investigations that they raised their concerns with a White House lawyer.”

Attorneys for Hill argued in a letter sent on Sunday that no executive privilege issues were in play for her testimony, citing potential “government misconduct” as one reason for their decision.