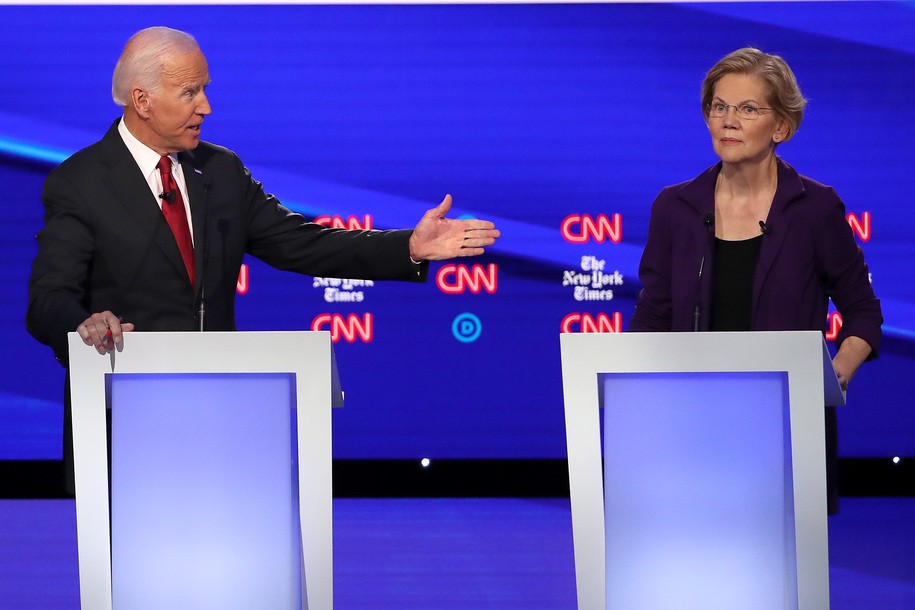 I couldn’t watch last night. I decided I wanted to watch playoff baseball. I wonder if most of the beltway punditry made the same decision.  The clips I have seen so far reveal that Warren was the punching bag last night as the new frontrunner in the primary race, and save for one issue (raising taxes to achieve M4A), she handled the onslaught well.   And Biden, while having his stumbles (“proud of Hunter’s judgment??), was stronger and crisper in his answers.  Here are what other people thought of the debate since I didn’t see it:

Josh Marshall: “I don’t know exactly how it will play politically or whether it will continue her rise in the polls. But Warren is simply operating at two or three times the speed and power of almost everyone else up on the stage. Sanders has receded far to the background of the debate. To a great degree, Biden has too. Biden’s answers have been clearer and crisper than in earlier debates. But he seems peripheral to the debate itself. Warren is setting the pace and everyone is reacting to her. […] I think Biden is doing better for himself in this debate than most people probably realize. But again, Warren just has a dynamism and command that isn’t matched by anyone else on the stage.”

Laura Clawson: “From that early phase where basically everyone wanted to pile on Warren—especially a visibly enraged Klobuchar—she may have been relieved to fade into the pack a little. Yet while she could have tried to just avoid taking hits, she didn’t shy away from taking on Biden when he went for the “I am the only person who’s gotten things done” line he’d previewed at a recent campaign event. Sanders got to Biden first on that issue, and he was effective by pointing to Biden’s record on the Iraq war, the horrible bankruptcy bill, and bad trade agreements. But Warren’s account of her press for the Consumer Financial Protection Bureau seemed more infuriating to Biden, who began ranting about the votes he rounded up for her vision—giving her a chance to show her toughness, the toughness that will be so familiar to so many women who’ve kept a smile on their faces when confronted with male condescension or aggression.

Everyone else was looking for that moment of elevation. There were strong contenders, like Castro’s “This president is caging kids on the border and effectively letting ISIS prisoners run free,” and a number of moments of Booker’s reach for inspiration and unity, but it seems unlikely that anyone managed to fundamentally alter the shape of the race. Sanders’ performance, both energetic and so wholly himself, may have arrested any slide in the polls he was seeing due to his health scare. Biden seemed a little sharper than in past debates. Booker and Harris both had overall strong performances. Buttigieg’s pivot to aggression may have been compelling for some voters. But a sea change in the race it was not.”

Taegan Goddard: “Warren is a solid debater but she didn’t come away unscathed. Her continued evasion on Medicare for All is confusing and probably not sustainable. Buttigieg and Klobuchar zeroed in and overall delivered their best debate performances yet. They were both sharp and aggressive. […]

Joe Biden was much stronger than he’s been in previous debates, particularly because foreign policy is currently dominating the headlines. His experience, knowledge and passion come through clearly. Biden also skillfully dismissed the mostly-false scandal surrounding his son’s business interests in Ukraine. Bernie Sanders might have had his best debate yet. For a guy who just had a heart attack, he was strong, energetic and the most consistent candidate on the stage. […]

Overall, it was an informative debate but did little to shake things up. With the exception of Gabbard, the Democratic candidates all have the same goals, just slightly different ideas on how to execute them. Donald Trump and the Republicans have different goals entirely.”

Associated Press: “For the second consecutive debate, Warren refused to say whether middle-class Americans would pay higher taxes under her proposed “Medicare for All” plan. It was a glaring dodge for a candidate who has risen to the top of the Democratic field by unveiling detailed policy proposals and selling them with a folksy flair.”

“And it was one of nearly half a dozen issues on which Warren found herself defending the broad ambition she has laid out to remake the American economy and rebalance the nation’s wealth. More moderate candidates, including Joe Biden, Pete Buttigieg and Amy Klobuchar, cast Warren as unrealistic and vague.”

“How Warren handles that criticism, which was abundant Tuesday and is likely to escalate in the coming weeks, will be a central test of whether she can maintain her standing.”

A new Gallup poll finds 52% of Americans say President Trump should be impeached and removed from office, while 46% say he should not be.

The 52% who support removing Trump is higher than Gallup ever found for removing President Nixon until August 1974.

Ezra Klein: “A few things are true about the Hunter Biden story. One is that there’s no evidence Joe Biden did what Donald Trump has accused him of doing: pressuring Ukraine to fire a prosecutor to protect his son from investigation.”

“But another is that Hunter Biden poses real problems for Joe Biden’s campaign, and if Democrats pretend otherwise, they’re making a mistake.”

“Many Democrats consider raising the Hunter Biden question unfair to Joe Biden. Perhaps it is. But no one said politics was fair. And if Democrats avoid the issue, they can be certain Trump will not. Biden’s vulnerability here needs to be tested in the primary, when Democrats have other choices, rather than in the general, when they won’t.”

“Bernie Sanders and Elizabeth Warren don’t just lead the Democratic presidential primary in fundraising. They’ve stockpiled millions more than their rivals, including former Vice President Joe Biden, who burned through money at a fast clip over the past three months while posting an anemic fundraising haul,” the AP reports.

“Sanders held $33.7 million cash on hand on his third-quarter fundraising report. Warren had $25.7 million during the same period, while Mayor Pete Buttigieg came next $23.3 million.”

“Biden, meanwhile, held just $8.9 million, a small fraction of what his leading rivals have at their disposal.”

Rep. Alexandria Ocasio-Cortez (D-NY), one of the most influential voices among young liberals and a rising Democratic star, plans to endorse Sen. Bernie Sanders for president and appear with him at a rally on Saturday, the Washington Post reports. Rep. Ilhan Omar (D-MN) is also throwing her support behind Sen. Bernie Sanders’s presidential campaign, The Hill reports. Omar added that Rep. Rashida Tlaib (D-MI) is also endorsing Sanders’s presidential bid.

John Harris: “The first [dynamic at last night’s debate] was the degree of critical focus on Sen. Elizabeth Warren, reflecting a calculation that she, rather than former Vice President Joe Biden, has the momentum in the race and is setting the agenda for the party. She took in the glare for the largest share of the three-hour debate without wilting, or receding for significant chunks of the evening (as she did in previous encounters) when the issues shifted away from terrain where she is most comfortable.”

“The second dynamic was an honest illumination of the party’s left-vs.-center debate. In past encounters, this conversation often was portrayed as a choice between ‘activists’ and ‘establishment,’ or between bold principles and expedient moderation.”

Dan Balz: “On one level, it’s arguable that this debate won’t materially change the Democratic nomination contest any more than the previous matchups did. After four debates, the people who were at the top of the field before the campaign started — former vice president Joe Biden, Sen. Elizabeth Warren (D-Mass.) and Sen. Bernie Sanders (I-Vt.) — are still the top three. The struggling candidates continue to struggle, with little to show for it.”

“At another level, however, these debates have played an important role in the Democratic race. The campaign today is not the campaign of six months ago. Reinforcing what has happened on the trail, the debates have revealed the disparate personalities seeking the nomination and have contributed to altered perceptions of their strengths and weaknesses.”

“Billionaire Tom Steyer appeared on the Democratic presidential debate stage for the first time Tuesday night, but voters in early states have already seen him on TV thousands of times,” the Wall Street Journal reports.

“Mr. Steyer, who new federal filings show has poured nearly $48 million of his own money into his long-shot bid, is dominating television screens in the first four states that will hold nominating contests early next year.”

“Since entering the race in July, Mr. Steyer has spent more than $26 million on TV ads, airing more than 53,000 spots in markets that reach Iowa, New Hampshire, South Carolina and Nevada voters… All told, that is more than six times as many as the rest of the Democratic field combined.”

21 comments on “The Fourth Debate Reaction”