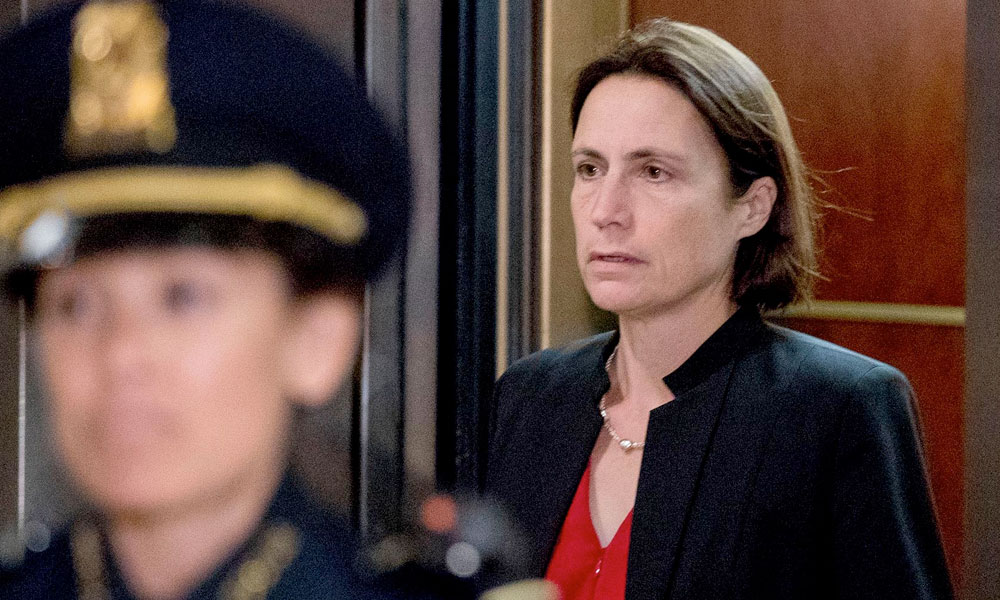 Fiona Hill, President Trump’s former top Russia aide, arrived at the Capitol Monday to testify in impeachment probe, Politico reports. NPR: “Hill, who declined to elaborate on her planned testimony, is expected to discuss concerns she raised over the ouster of longtime diplomat Marie Yovanovitch, whose removal as the ambassador of Ukraine has become a key topic in the impeachment inquiry. She is also likely to speak about how, in her view, Rudy Giuliani, the president’s personal lawyer, and Gordon Sondland, the U.S. ambassador to the European Union, were operating a Ukraine policy outside of the National Security Council.”

The Times also reported that Hill would testify that she objected to the July 25 call between Trump and Ukrainian President Volodymyr Zelensky. A White House memorandum later showed that Trump repeatedly pressed Zelensky during the call to look into topics that could be politically useful for Trump in 2020. Hill, the Times reported, didn’t understand the call’s purpose.

Per the Times’ source, Hill didn’t know Trump would use the call to press Zelensky for dirt on Joe and Hunter Biden. The Times reported that Hill would testify that she was “cut out of the loop as Mr. Giuliani and others ran a shadow diplomacy intended to benefit Mr. Trump’s political position,” in the paper’s words.

President Trump said in a statement the Treasury Department will be able to impose penalties against “current and former officials of the Government of Turkey and any persons contributing to Turkey’s destabilizing actions in northeast Syria,” the Washington Post reports.

He added that he plans to raise steel tariffs “back up to 50 percent, the level prior to reduction in May,” and that the Commerce Department will immediately cease its trade negotiations with Turkey.

“Trump would tell Erdoğan that if he wanted to invade Syria he would have to own whatever mess ensued… Erdoğan would have to take care of ISIS and manage international condemnation, trouble from Capitol Hill, and the quagmire with the Kurds. And when Trump put it in such stark terms to Erdoğan, the Turkish leader would demur. Until last Sunday, that is, when he told Trump he was moving ahead with the invasion of northern Syria.”

“This time, Erdoğan called Trump’s bluff, having waited for international forces to wipe out the ISIS caliphate.”

“China wants further talks as soon as the end of October to hammer out the details of the ‘phase one’ trade deal touted by Donald Trump before Xi Jinping agrees to sign it,” Bloomberg reports.

“Beijing may send a delegation led by Vice Premier Liu He, China’s top negotiator, to finalize a written deal that could be signed by the presidents at the Asia-Pacific Economic Cooperation summit next month in Chile, one of the people said. Another person said China wants Trump to also scrap a planned tariff hike in December in addition to the hike scheduled for this week, something the administration hasn’t yet endorsed.”

“America’s former Kurdish allies in Syria on Sunday announced a new deal with the government in Damascus — a sworn enemy of Washington that is backed by Russia — after President Trump ordered the withdrawal of American forces from northern Syria,” the New York Times reports.

“For five years, United States policy relied on collaborating with a Kurdish-led militia both to fight the Islamic State and to limit the influence of Iran and Russia…”

“On Sunday, after Mr. Trump abruptly abandoned that approach, American leverage appeared all but gone. That threatened to give President Bashar al-Assad and his Iranian and Russian backers a free hand. It also jeopardized hard-won gains against the Islamic State — and potentially opened the door for its return.”

“Ahead of this week’s subpoenas and depositions, new documents obtained by Axios show how Democrats are taking the impeachment inquiry in two tightly focused directions: Ukraine and obstruction of justice.”

Three former administration officials tell Axios that former national security adviser H.R. McMaster did not authorize and was not aware of the “locking down” of transcripts of conversations between President Trump and foreign leaders that were politically damaging but didn’t pose national security risks.

Gen. John Allen, the former commander of American forces in Afghanistan, told CNN that there is “blood on Trump’s hands for abandoning our Kurdish allies.”

Said Allen: “There was no chance Erdogan would keep his promise, and full blown ethnic cleansing is underway by Turkish supported militias. This is what happens when Trump follows his instincts and because of his alignment with autocrats.” He added: “I said there would be blood, but could not have imagined this outcome.”

“A video depicting a macabre scene of a fake President Trump shooting, stabbing and brutally assaulting members of the news media and his political opponents was shown at a conference for his supporters at his Miami resort last week,” according to footage obtained by the New York Times.

“For 24 hours last week, Trey Gowdy, the former South Carolina congressman best known for leading congressional investigations of Hillary Clinton, was the new face of President Trump’s outside legal defense and a symbol of a streamlined effort to respond to a fast-moving impeachment inquiry,” the New York Times reports.

“A day later, the arrangement fell apart, with lobbying rules prohibiting Mr. Gowdy from starting until January, possibly after the inquiry is over. Now, according to two people familiar with events, Mr. Gowdy is never expected to join the team. And Trump advisers are back to square one, searching for a different lawyer.”

“Federal prosecutors in Manhattan are examining Rudy Giuliani’s business dealings in Ukraine, including his finances, meetings and work for a city mayor there,” the Wall Street Journal reports. “Investigators also have examined Mr. Giuliani’s bank records.”

“Witnesses have been questioned about Mr. Giuliani since at least August by investigators, who also want to know more about Mr. Giuliani’s role in an alleged conspiracy involving two of his business associates, the people said. The investigation is being led by the U.S. attorney’s office in the Southern District of New York.”

James Holman: “Vladimir Putin has won so much these past three years that he may get tired of winning.”

“The U.S. intelligence community’s January 2017 report on Russian interference in the previous year’s presidential campaign sought to explain why Donald Trump was so attractive to Moscow. This sentence has fresh salience: ‘Pro-Kremlin proxy Vladimir Zhirinovskiy, leader of the nationalist Liberal Democratic Party of Russia, proclaimed just before the election that if Trump won, Russia would ‘drink champagne’ in anticipation of being able to advance its positions on Syria and Ukraine.’”

“Coming on the heels of Trump holding up assistance for Ukraine as his administration urged its new president to investigate a Democratic challenger, Trump’s order on Saturday to withdraw U.S. troops from northern Syria has given the Russians a new reason to reach for the bubbly.”

Reuters: “In a joint declaration, climate scientists, physicists, biologists, engineers and others from at least 20 countries broke with the caution traditionally associated with academia to side with peaceful protesters courting arrest from Amsterdam to Melbourne… The declaration was coordinated by a group of scientists who support Extinction Rebellion, a civil disobedience campaign that formed in Britain a year ago and has since sparked offshoots in dozens of countries.”

Olivia Nuzzi: “The truth is, Trump fatigue is a condition that knows no party, and many Republicans are as tired of this shit as anybody else. That’s not to say they’re outraged, or motivated to Make a Difference. They’re just tired. You can live inside the right-wing bubble in a state of depression, resigned to the fact that, yeah, every five minutes or so, the president is probably going to do something norm-shattering or potentially impeachable, and no, you probably won’t or can’t do anything to change that. Sad!”

“‘I’m totally bored by the story,’ one person who speaks regularly with the president told me. ‘There’s nothing to it. I already know all the details.’ This person is bored more generally, too — with the topic of Donald Trump. When we talk about what it would take for the president’s defenders to turn on him, this crucial piece is missing: You can’t feel outraged if you can no longer feel anything at all.”