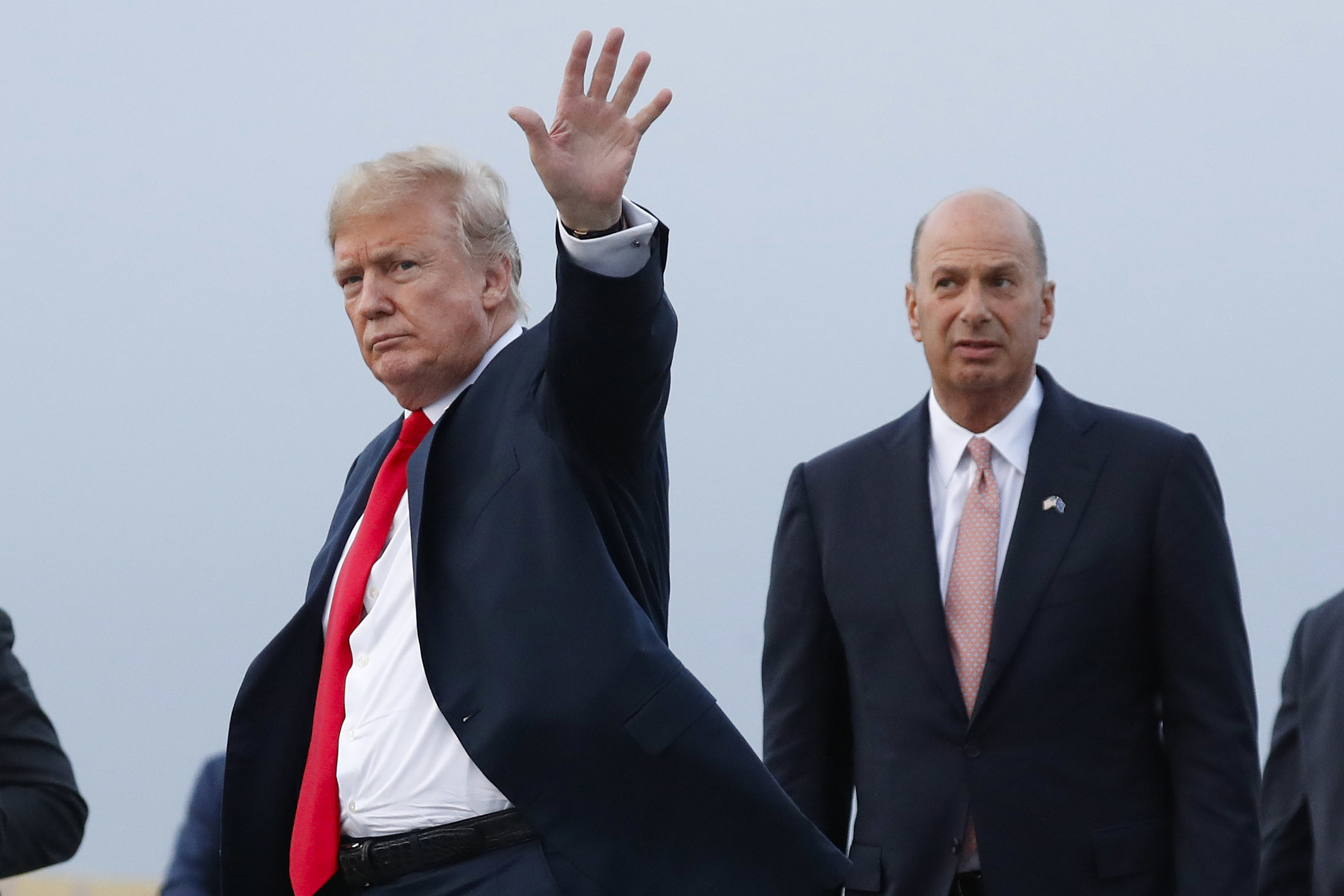 “The U.S. ambassador to the European Union, Gordon Sondland, intends to tell Congress this week that the content of a text message he wrote denying a quid pro quo with Ukraine was relayed to him directly by President Trump in a phone call,” the Washington Post reports.

“Sondland plans to tell lawmakers he has no knowledge of whether the president was telling him the truth at that moment.”

Said a person familiar with Sondland’s testimony: “It’s only true that the president said it, not that it was the truth.”

“Sondland will hold out the possibility that Trump wasn’t truthful in his denial of a quid pro quo as well as an alternative scenario in which the president’s interest in the scheme soured.”

“President Trump has ordered a withdrawal of U.S. forces from northern Syria in the face of a Turkish military offensive targeting Kurdish fighters in the region, two days after he promised that the United States was not ‘abandoning’ its partners in the campaign against the Islamic State,” the Washington Post reports.

“Trump ordered a withdrawal of the about 1,000 U.S. troops left in northern Syria late Saturday. The president made the decision after indications that Turkey intends to expand its attack ‘farther south than originally planned and to the west.’”

Syrian Kurdish officials said clashes near Ain Eissa, a key Kurdish-held town in northern Syria, allowed 950 Islamic State supporters to escape from a camp for displaced people near a U.S.-led coalition base, the AP reports.

“The American military was unable to carry out a plan to transfer about five dozen ‘high value’ Islamic State detainees out of Kurdish-run wartime prisons before the Pentagon decided to move its forces out of northern Syria and pave the way for a Turkish-led invasion,” the New York Timesreports.

“In the same area on Sunday, hundreds of Islamic State sympathizers escaped from a low-security detention camp in the region, taking advantage of the chaos caused by the Turkish ground invasion and the accompanying strikes.”

“Well, our primary interest right now is making sure that that person is protected,” the Democratic lawmaker said. “Indeed, now there’s more than one whistleblower, that they are protected.”

Schiff said that a testimony from the whistleblower may not be needed since Democrats already have the call record on Trump’s conversation with Ukrainian President Volodymyr Zelensky, during which Trump pushed Zelensky to investigate Joe Biden while discussing military aid to Ukraine.

Democrats want to “identify other evidence” regarding Trump’s decision to freeze nearly $400 million in funds for the aid, according to Schiff.

“It may not be necessary to take steps that might reveal the whistleblower’s identity to do that,” he said. “And we’re going to make sure we protect that whistleblower.”

Said Schiff: “We want to make sure that we meet the needs of the investigation and not give the president or his legal minions the opportunity to tailor their testimony and in some cases fabricate testimony to suit their interests.”

“Chinese President Xi Jinping warned on Sunday that any attempt to divide China will be crushed, as Beijing faces political challenges in months-long protests in Hong Kong and U.S. criticism over its treatment of Muslim minority groups,” Reuters reports.

Said XI: “Anyone attempting to split China in any part of the country will end in crushed bodies and shattered bones.”

Attorney General Bill Barr decried attacks on religious values in a speech, tying a movement of “militant secularism” to societal maladies including the opioid epidemic and “an increase in senseless violence,” CNN reports.

Barr said a “moral upheaval” and decades of efforts to undermine religion had given way to growing illegitimacy rates, drug use, and “angry, alienated young males.”

Said Barr: “The campaign to destroy the traditional moral order has coincided and I believe has brought with it immense suffering and misery. And yet the forces of secularism, ignoring these tragic results, press on with even greater militancy.”

Wall Street Journal: “For now the truce opens an opportunity for Beijing to kick down the road concessions that it doesn’t want to make. Whether those hard issues ever get resolved is a question.”

“The Chinese leadership feels that time is on its side, believing President Trump is under pressure to make compromises as part of his re-election bid next year. But by trying to drag out the negotiations, Beijing also risks the prospect that Mr. Trump may harden his position again to show he is being tough on China—or that it may have to start over with a new Democratic president.”

Rep. Rashida Tlaib (D-MI) told Deadline Detroit that House Democrats have discussed jailing allies of the president who do not comply with congressional subpoenas.

Said Tlaib: “There have been actual serious conversations about what the logistics would look like… if we did have to force someone through a court order to come before the Congressional committee. This is pretty uncharted territory for many of us and even for Congress.”

“The Russian Air Force has repeatedly bombed hospitals in Syria in order to crush the last pockets of resistance to President Bashar al-Assad,” according to an investigation by the New York Times.

“An analysis of previously unpublished Russian Air Force radio recordings, plane spotter logs and witness accounts allowed The Times to trace bombings of four hospitals in just 12 hours in May and tie Russian pilots to each one.”

“The 12-hour period beginning on May 5 represents a small slice of the air war in Syria, but it is a microcosm of Russia’s four-year military intervention in Syria’s civil war. A new front in the conflict opened this week, when Turkish forces crossed the border as part of a campaign against a Kurdish-led militia.”

“Hunter Biden is stepping down from the board of a Chinese-backed private equity company and promising to forego all foreign work if his father, former U.S. Vice President Joe Biden, is elected president in 2020,” Bloomberg reports.

“After months of keeping a relatively low-profile as President Donald Trump leveled a barrage of unsubstantiated accusations of corruption at him, the younger Biden is publicly vowing to avoid any conflict of interest.”

— Speaker Nancy Pelosi, in an interview with the New Yorker.

“President Trump had lunch on Saturday with Rudy Giuliani amid revelations that prosecutors were investigating Mr. Giuliani for possible lobbying violations, and speculation that his position as the president’s personal lawyer was in jeopardy,” the New York Times reports.

“The lunch, at Mr. Trump’s golf course in Sterling, Va., was among several shows of the president’s support for Mr. Giuliani on Saturday. They seemed meant to tamp down questions about Mr. Giuliani’s status with a client famous for distancing himself from advisers when they encounter legal problems of their own.”