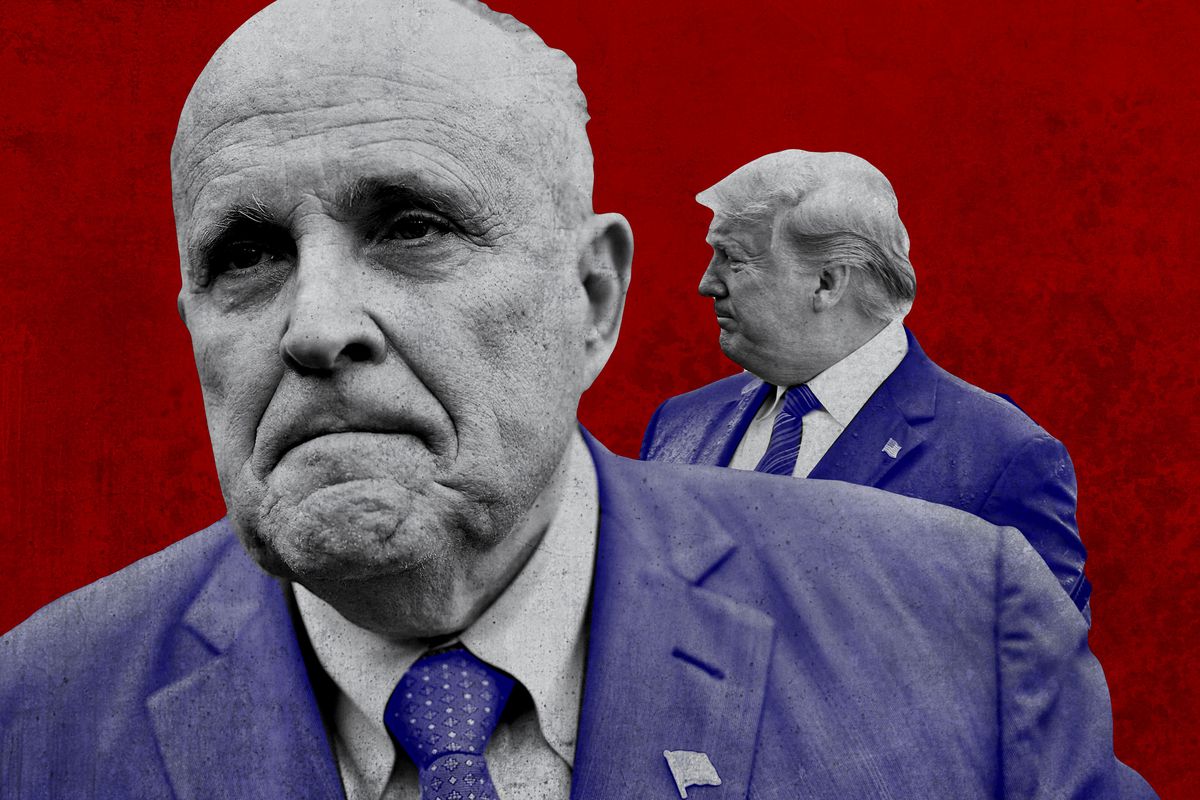 On Friday, President Trump told reporters that he didn’t know whether Rudy Giuliani was still his personal attorney, the Washington Post reports. LOL. Let the distancing begin and back up that bus. Said Trump: “Well, I don’t know. I haven’t spoken to Rudy. I spoke to him yesterday briefly. He’s a very good attorney, and he has been my attorney.”

In a text message shortly after the president’s comments, Giuliani confirmed that he’s still representing Trump: “Yes, I am still his attorney.”

On Saturday, “President Trump defended his personal attorney Rudy Giuliani […] amid reports that federal prosecutors are investigating whether the former New York City mayor broke lobbying laws in his efforts to oust the former U.S. ambassador to Ukraine Marie Yavonovitch,” the Washington Post reports. Said Trump: “So now they are after the legendary ‘crime buster’ and greatest Mayor in the history of NYC, Rudy Giuliani. He may seem a little rough around the edges sometimes, but he is also a great guy and wonderful lawyer.”

Politico: “Yet Trump remains linked to Giuliani, who was initially hired to help fend of Robert Mueller’s Russia investigators, but who now may have pulled the president into another investigation — one that might lead to impeachment. While the president has long appreciated Giuliani’s pugnacious and never-back-down attitude, Trump allies fear Giuliani will damage Trump with his long-winded monologues and free-wheeling accusations.”

“The constant sniping from staff could ultimately force Trump to dump his long-valued fixer, as he has done with former personal lawyer Michael Cohen and countless other ousted officials, like ex-Attorney General Jeff Sessions and former chief strategist Steve Bannon.”

“Federal law requires American citizens to disclose to the Justice Department any contacts with the government or media in the United States at the direction or request of foreign politicians or government officials, regardless of whether they pay for the representation. Law enforcement officials have made clear in recent years that covert foreign influence is as great a threat to the country as spies trying to steal government secrets.”

Rudy Giuliani told CNN that he’s not aware he’s under investigation for his involvement with the unraveling Ukraine scandal, calling it a “political attack.” Said Giulani: “No, nothing but leaks, which has to tell you whether they are or are not investigating, it’s a political attack. Otherwise, why leak it?” He added: “If it’s an appropriate law enforcement investigation, you try to keep it secret so the subjects aren’t alerted.”

Well, that’s ironic, since it was Giuliani in 2016 who was passing on leaks from the FBI NY Field Office on Clinton. Nice admission, Rudy. Also, the subject of a criminal investigation is the last one contacted.

“President Trump on Friday repeated his assertion of sweeping executive immunity — arguing in court that, because he is president, he cannot be investigated by any prosecutor, anywhere,” the Washington Post reports.

“Trump’s personal attorneys made the argument in a filing with the U.S. Court of Appeals for the 2nd Circuit in New York.”

“The Justice Department asked a federal appeals court on Friday to stop the release of President Trump’s tax returns to the Manhattan district attorney’s office, arguing that local prosecutors should have to meet a very high legal bar before investigating a sitting president,” the New York Times reports.

“The filing meant Mr. Trump’s own Justice Department was lending support to his attempt to block a subpoena issued to his accounting firm for eight years of his personal and corporate tax returns.”

A U.S. federal district court has ruled that President Trump violated the law by declaring a national emergency in order to build a wall on the U.S.-Mexico border.

“They seem to be emboldened by the actions of the whistleblower whose explosive account of President Trump’s phone call to Ukraine’s Volodymyr Zelensky about investigating Trump’s domestic political rivals ignited the impeachment inquiry. Another whistleblower is known to have come forward.”

Secretary of State Mike Pompeo is grilled by the Nashville NBC affiliate about whether he met with Rudy Giuliani when they were both in Warsaw in February. Pompeo wilts, but refuses to answer.

Former Defense Secretary James Mattis told NBC News that the president’s decision to pull troops from Syria’s border in advance of a Turkish incursion could have dire consequences and lead to ISIS’s resurgence.

Said Mattis: “We may want a war over; we may even declare it over. You can pull your troops out as President Obama learned the hard way out of Iraq, but the ‘enemy gets the vote’, we say in the military. And in this case, if we don’t keep the pressure on, then ISIS will resurge. It’s absolutely a given that they will come back.”

And as if on cue, “five ISIS militants have broken out of a prison in northern Syria after Turkish shelling nearby,” the Independent reports. “The detainees escaped from a prison in Qamishli city.” Then, “a contingent of U.S. Special Forces has been caught up in Turkish shelling against U.S.-backed Kurdish positions in northern Syria, days after President Trump told his Turkish counterpart he would withdraw U.S. troops from certain positions in the area,” Newsweek reports.

Meanwhile, “the Pentagon will deploy about 1,500 extra troops to Saudi Arabia in answer to requests by the leading US military commander in the Middle East and, in part, because the US Navy is unable to send a relief aircraft carrier to deter potential Iranian aggression,” CNN reports.

“The move to bolster troops in the Middle East comes as President Trump’s decision to pull back US military forces from northeastern Syria has prompted bipartisan criticism from lawmakers.”

So, we are deploying more troops to protect Trump’s investments in Saudi Arabia, but not to protect the Kurds or our special forces being shelled by Turkey in Syria.

Fox News anchor Shepard Smith announced he is stepping down: “Recently I asked the company to allow me to leave Fox News and begin a new chapter. After requesting that I stay, they graciously obliged.”

The New York Times calls the decision “an abrupt move that left some of his co-workers openly stunned.” Related? Attorney General William Barr met with Rupert Murdoch earlier this week.

President Trump announced that the U.S. and China have reached a “very substantial phase one” deal on trade “subject to it being written,” the Washington Post reports. He added that the tariffs set to go into effect against China on Tuesday have now been canceled.

“In return for a series of modest concessions, most of which had been offered by President Xi Jinping’s administration in previous negotiating rounds, Donald Trump agreed to suspend another set of tariff increases originally scheduled to take effect on October 15,” the Financial Timesreports.

“The two sides are still a long way from a final settlement that addresses much more contentious issues, such as Chinese government support for strategic industries and state-owned enterprises, which Mr Trump had hoped to reach before his 2020 re-election campaign kicks off in earnest. Chinese negotiators, however, believe that time is on their side and they can continue to stonewall Mr Trump and his lead negotiator, US Trade Representative Robert Lighthizer, on any ‘systemic’ reforms that they fear would weaken the Chinese Communist party’s grip over the world’s second-largest economy.”

“But suppose … 30 senators … boycott the proceedings—or, when the big day of the vote arrived, mysteriously not show up. With 70 members now present, the number of senators required to convict Trump is no longer 67. It’s 47: exactly the number of seats Democrats and independents currently hold in the Senate.”

“A path to a Brexit deal opened Friday — but there’s still a long way to go and very little time,” Politico reports.

“EU diplomats said the U.K.’s willingness to soften its position on customs arrangements for Northern Ireland provided the breakthrough that led officials to announce they would resume intense negotiations.”

New York Times: “Among her fellow Democrats, Rep. Tulsi Gabbard has struggled to make headway as a presidential candidate, barely cracking the 2 percent mark in the polls needed to qualify for Tuesday night’s debate. She is now injecting a bit of chaos into her own party’s primary race, threatening to boycott that debate to protest what she sees as a ‘rigging’ of the 2020 election. That’s left some Democrats wondering what, exactly, she is up to in the race, while others worry about supportive signs from online bot activity and the Russian news media.”

“Perhaps strangest of all is the unusual array of Americans who cannot seem to get enough of her.”

“On podcasts and online videos, in interviews and twitter feeds, alt-right internet stars, white nationalists, libertarian activists and some of the biggest boosters of Mr. Trump heap praise on Ms. Gabbard.”

“A fresh series of Facebook ads this week by Elizabeth Warren seeks to put the social media giant on the defensive — by telling a lie,” CNN reports.

“The ads, which began running widely on Thursday, start with a bold but obvious falsehood: That Facebook and its CEO Mark Zuckerberg have endorsed President Trump’s reelection campaign.”

“The ad’s own admission of a lie seeks to draw attention to a controversial Facebook policy Warren has spent days criticizing. Under the policy, Facebook exempts ads by politicians from third-party fact-checking — a loophole, Warren says, that allows Zuckerberg to continue taking ‘gobs of money’ from Trump’s campaign despite Trump’s ads telling untruths Joe Biden and his son.”

“Donald Trump tried to distance himself from the latest scandal that threatens his presidency on Thursday by saying he didn’t know either of the foreign-born Rudy Giuliani associates that his own Justice Department had just indicted for alleged campaign finance violations,” Politicoreports.

“But that’s not what one of the men said three years ago — while attending Trump’s invite-only 2016 election night party in New York. In fact, Lev Parnas described himself to a foreign correspondent at the cash-bar event in midtown Manhattan as a friend of the president-elect who didn’t live far from his south Florida winter home.”

“President Trump announced on Friday the departure of Kevin McAleenan, the acting secretary for the Department of Homeland Security who spent his six-month tenure trying to curb a surge of asylum seekers at the southwestern border while managing a turbulent relationship with a president intent on restricting immigration,” the New York Times reports.

“Mr. McAleenan’s exit from the White House came after he tried publicly to embrace the president’s increasingly aggressive assault on legal and illegal immigration even as he privately resisted some of Mr. Trump’s most extreme ideas.”

Washington Post: “McAleenan had been frustrated with a cadre of Trump’s appointments to senior immigration roles and recently told The Washington Post that he was struggling to control his department. More hard-line figures have attacked him as insufficiently committed to the president’s immigration agenda, while critics of those policies argue he has used conciliatory rhetoric to lend cover to harsh measures.”