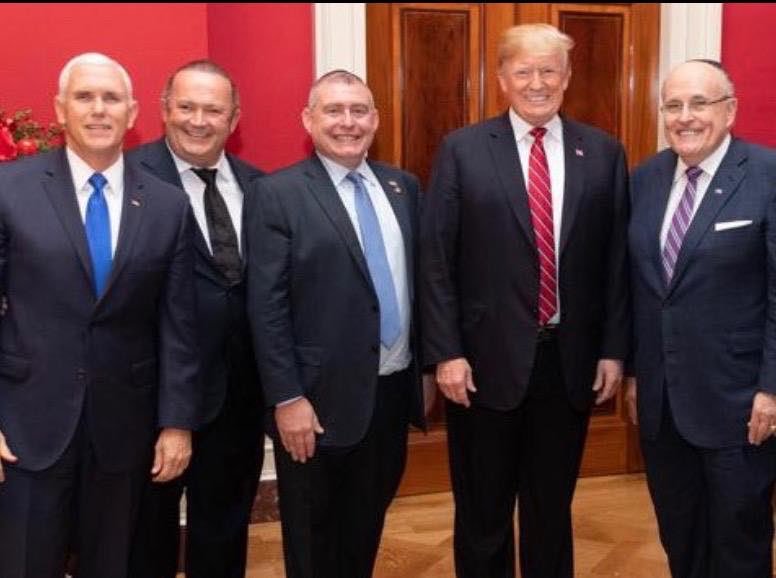 “Lev Parnas and Igor Fruman, two Florida businessmen, have been under investigation by the U.S. Attorney’s office in Manhattan, and are expected to appear in federal court in Virginia later on Thursday… The men’s nationalities were unclear, though both were believed to have been born in former Soviet republics.”

USA Today reports both men were scheduled to be deposed this week by the three House committees leading the impeachment probe.

Rudy Giuliani reportedly had lunch with Lev Parnas and Igor Fruman at Trump International Hotel in Washington yesterday, the same day that they were arrested on campaign-finance charges, the Wall Street Journal reports.

Prosecutors said at a press conference that Parnas and Fruman were attempting to leave the country when they were arrested at Dulles International Airport.

“House investigators issued subpoenas on Thursday to compel two associates of Rudy Giuliani to sit for depositions in the impeachment inquiry, just hours after the men were indicted on campaign finance charges that touched on their work in Ukraine,” the New York Times reports. Lev Parnas and Igor Fruman are “required to appear for a deposition next Wednesday and hand over records related to their work with Mr. Giuliani.”

“President Trump said that he doesn’t know the two business associates of his personal attorney Rudy Giuliani who were arrested on campaign finance charges, but acknowledged he may have been photographed with them at some point,” The Hill reports.

Trevor Potter and Delaney Marsco: “Rudolph W. Giuliani is not the secretary of state. In fact, he has no official position in President Trump’s Cabinet or administration. Yet he is traveling the world holding himself out as a U.S. government operative, engaging in some unknown amount of ‘unofficial’ diplomacy and insisting his work is not only officially sanctioned by the president but also assisted by the State Department. The president’s ‘private lawyer’ is not charging Trump for his services, but he and his law firm are known to have dozens of clients — including foreign entities — who are paying for whatever services they think Giuliani can provide for them.”

“That is a very convenient setup for Giuliani — but it leaves the public in the dark about the wealthy special interests who might be subsidizing his gratis work for Trump — or for whom he might actually be working while invoking Trump’s name and that of the State Department. Because Giuliani is not officially a federal employee, he can sidestep ethics obligations that would require transparency behind the foreign or domestic interests who are paying him.”

Sen. Lindsey Graham (R-SC) thought he was talking Turkey’s minister of defense in an August call but he was really talking to Russian pranksters, Politico reports.

In the call, Graham was primarily concerned with getting Turkey back into the F-35 program and urging the “defense minister” to refrain from using Russia’s S-400 anti-aircraft weapon system.

But Graham also expressed sympathy for Turkey’s “Kurdish problem” and described the Kurds as a “threat.” Those private comments appear to contradict his public statements this week, in which he criticized Trump’s decision to pull U.S. troops out of northern Syria.

Seventeen former Watergate special prosecutors write in the Washington Post that President Trump should be impeached:

“In reaching these conclusions, we take note of 1) the public statements by Trump himself; 2) the findings of former special counsel Robert S. Mueller III’s investigation; 3) the readout that the president released of his phone call with Ukrainian President Volodymyr Zelensky; 4) the president’s continuing refusal to produce documents or allow testimony by current and former government employees for pending investigations, as well as for oversight matters; and 5) other information now publicly available, including State Department text messages indicating that the release of essential military aid to Ukraine was conditioned on Ukraine’s willingness to commence a criminal investigation designed to further the president’s political interests.”

“More than a dozen prominent conservative lawyers, including George Conway, offered their legal reasoning for an ‘expeditious’ impeachment probe into President Trump, creating a document they hope will be read by Republicans who continue to stand by the president,” the Washington Post reports.

“The 16 attorneys, many of whom worked in Republican administrations, wrote in a joint statement to be released Thursday morning that Trump’s now infamous call with Ukrainian President Volodymyr Zelensky, the text messages between diplomats and Trump’s public call for China to investigate a political opponent are ‘undisputed’ events that amount to Trump violating his oath of office.”

Turkish President Tayyip Erdogan said he will send the 3.6 million Syrian refugees in Turkey to Europe if European countries continue to criticize his military incursion in Syria, Reuters reports. Said Erdogan: “We will open the gates and send 3.6 million refugees your way.”

“The White House gave a politically appointed official the authority to keep aid to Ukraine on hold after career budget staff members questioned the legality of delaying the funds, a shift that House Democrats are probing in their impeachment inquiry,” the Wall Street Journal reports.

“President Trump’s order to freeze nearly $400 million in aid to Ukraine in mid-July is at the center of House Democratic efforts to investigate allegations that Mr. Trump used U.S. foreign-policy powers to benefit himself politically.”

“The House committees investigating President Trump and Ukraine have requested that his former Russia advisor Fiona Hill appear for a deposition on Oct. 14, as well as turn over several documents dating back to January 2017,” Axios reports.

“Hill left her role as Trump’s top Russia aide in August, although she had wrapped up most of her work by mid-July. It’s unclear how much she knew about the controversial July 25 call between Trump and Ukrainian President Volodymyr Zelensky, which is at the center of Democrats’ impeachment inquiry.”

“A sustained Turkish military operation against U.S.-backed Kurdish forces in Syria — which President Trump appears to have permitted — would vastly increase the threat to Americans from the Islamic State militant group, which remains intent on attacking the West,” current and former intelligence officials tell NBC News.

“The immediate concern, officials say, is what will happen with the 12,000 ISIS fighters currently being guarded by the American-backed Kurds. The ISIS prisoners are the world’s largest concentration of terrorists. If those fighters are set free, officials fear a replay of what happened in Iraq between 2010 and 2013, when the core group who founded ISIS were released or escaped from detention after U.S. forces left the country.”

New York Times: “At the Pentagon, where more than five years of fighting alongside Kurdish troops in Iraq and Syria has now given way to standing aside as those same allies are attacked, some officials said there was more anger than they had seen at any point in Mr. Trump’s presidency.”

“Vice President Mike Pence said he is working with the White House counsel’s office to release transcripts of his own calls with Ukranian President Volodymyr Zelenskiy,” the AP reports. “Pence said records of his two phone conversations would help exonerate President Trump of any wrongdoing.” Pence also said he “never discussed the issue of the Bidens” with Zelenskiy.

“Even as the White House appears to settle on the legal tactics to stave off Democrats’ impeachment demands, uncertainty and unease over Trump’s messaging approach remains high among his Republican allies, who see the ever-growing inquiry consuming the White House,” CNN reports.

“Trump has offered scant indication he is turning his focus to governing… Instead, the President has spent hours tweeting about the impeachment and lighting up the phone lines of his allies on Capitol Hill — including Senate Majority Leader Mitch McConnell, to whom he’s stressed the importance of Republican unity.”

“In private, Trump is increasingly leaning on the Republican leader in the Senate. In a return to the President’s panicked behavior during the height of the Mueller investigation, Trump is calling McConnell as often as three times a day.”

“One of Donald Trump’s most prominent Christian supporters will argue in a book due out before the 2020 general election that American evangelicals ‘have a moral obligation to enthusiastically back’ the president,” Politico reports.

“The book’s author, Faith and Freedom Coalition founder Ralph Reed, became a loyal foot soldier for Trump immediately after he nabbed the Republican presidential nomination in 2016 — commanding hordes of white evangelical voters from his perch on the candidate’s religious advisory board to trust that the New York businessman would grow the economy, defend religious freedom and dismantle federal protections for abortion, if elected.”

“The original title for the book was Render to God and Trump, a reference to the well-known biblical verse, “Render to Caesar the things that are Caesar’s.” The message from Jesus in Matthew 22, has been used in contemporary politics to justify obedience to government — or in the case of Reed’s book, to Trump.”