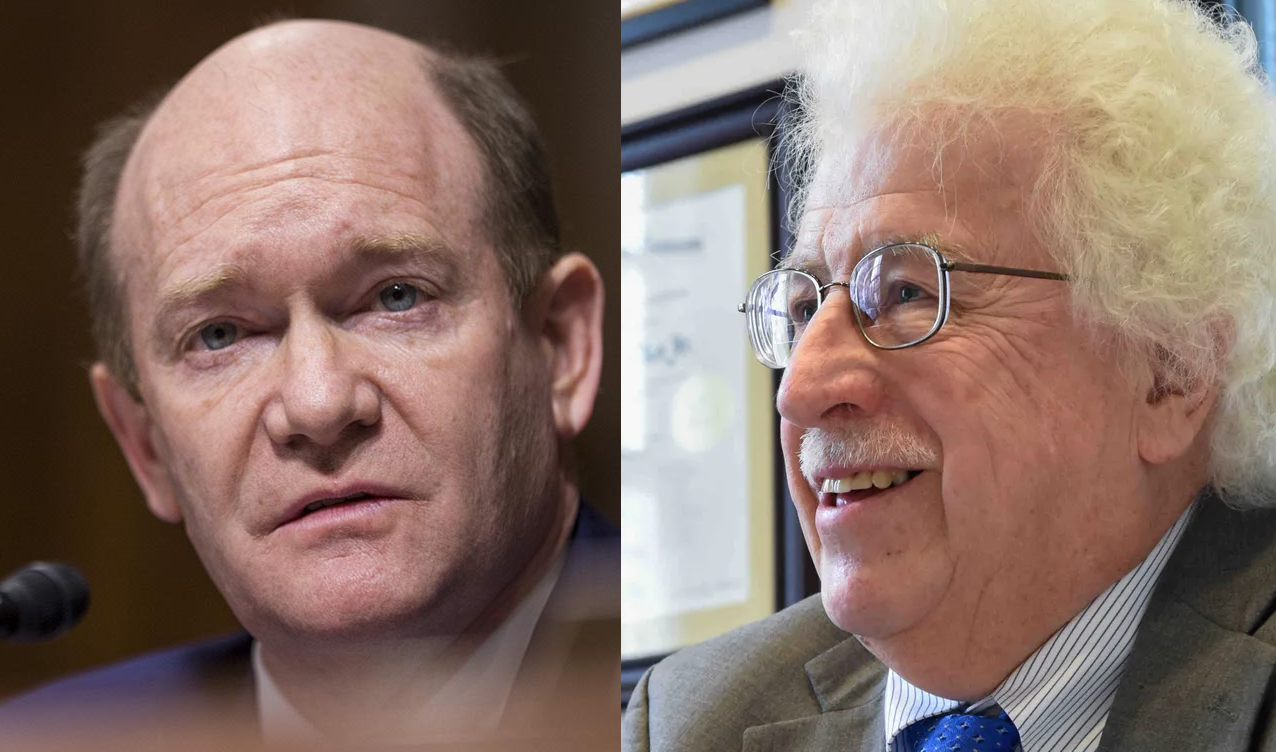 State Representative John Kowalko has always been the left pole in Delaware politics that keeps the Overton Window of both the Democratic Party and Delaware Politics in general moving too far to the right. He is very much our state’s Bernie Sanders. He speaks his mind with passion if not tact, and he is principled if not pragmatic.

His latest target is Senator Chris Coons, who I must admit and have said, has not been acquitting himself well lately as a Democrat. His latest adventure in mealy mouthed let’s straddle this fence both sides bullshit that seems to be his only known language involves impeachment.

Coons has yet to decide whether he thinks President Donald Trump should be removed from office. “I support the impeachment inquiry,” Coons said. “Not necessarily removal.”

Coons, who sees his chamber as a jury during the impeachment process, says it’s too early to make a decision.

Why? The evidence is all out there. Trump has admitted his crimes, twice, on live television and in an official White House summary/rough transcript of his criminal call with the Ukrainian President. There is nothing left to decide. Sure, the House is hearing from those involved in the criminal Giuliani led scheme as a matter of getting its hand on all possible evidence, but we already know the end of the story. On at least two articles of impeachment (Obstruction of Justice and Abuse of Power), the verdict is already in if you are not a Republican seeking to hide in the bushes.

“To say that I support an impeachment inquiry means I think the House should do its job and get to the bottom of this,” Coons said. “It’s inappropriate for senators to say what punishment they may or may not think is appropriate before there’s even been articles of impeachment referred to the Senate.”

It’s never a good sign if you are using the exact same accountability avoidance strategy as Susan Collins.

Back to Kowalko. He had much the same reaction to Coons’ comments as I did. But he also takes issue with Trump’s recent betrayal of the Kurds and Coons’ seeming lack of forceful response to it. He sent out a press release/op ed to me and others, and posted it in a comment on Delaware Liberal. Be forewarned, it’s long.

Because of the recent permission granted by Trump to the Turkish autocracy that will allow/encourage a campaign of genocide against the Kurdish people, who have exhibited a courageous and determined willingness to fight the evils of terrorism, I felt obligated to revisit a past moment in my personal experience with Turkeys history.

In 2007 I sponsored a resolution of remembrance of the atrocities committed against the Armenians by the Turkish/Ottoman Empire regime. Here is the statement I released at the time:

“It was my privilege to honor your request that the Delaware General Assembly proclaim April 24 as a day of remembrance of the Armenian Genocide. On Thursday April 5th 2007 the Delaware House of Representatives unanimously passed House Resolution No. 14 proclaiming the 24th as a day of remembrance and enumerating some of the horrors perpetuated on the Armenian people.

I was particularly honored to present this resolution since it will officially record and acknowledge a moment in the history of mankind when man’s inhumanity to man and humankind’s disregard for a civilized morality was made horribly apparent. The attempt to systematically eliminate all traces of a noble civilization such as the Armenian culture is another shameful moment in the history of the world. In order to guard against recurrences of such base and shameful behavior we must freely admit that these types of horrors occurred and still occur. To paraphrase “those who fail to learn from history are doomed to repeat its failures” and failure to admit the moral failings of society will only ensure more decay.

I am humbled to be able to present and record the true story of the persecution and debasement foisted upon such a noble civilization as the Armenians’ to recognize its greatness and to warn our future generations of the intolerance and hatred that can lurk just below the surface of humanity so that we may always guard against the base instincts of inhumane behavior.”

“We want to thank Representative Kowalko for leading the efforts on passing this legislation, and the initiative taken by Mike to take the initiative to pass this resolution,” commented ANC ER Director Karine Birazian.

The narrative did not end there. I was confronted by Turkish-American businessmen who objected to the resolution (which passed unanimously) and met with a half-dozen of them on several occasions. I was convinced then and still believe now that I had made the proper decision in light of the ridiculous assertions they made to me (personally) at that time.

One argument was that including the word “genocide” in the resolution was inappropriate because the word/term “genocide” had not been coined in the early 1900’s when the atrocities occurred. But perhaps the most startling admission/challenge to the resolution was voiced by a half-dozen Turkish businessmen at one of the meetings I hosted for them in my district. They objected to the estimated number of 1.5 million Armenian (forced-march) deaths and presented me with papers assuring that number was exaggerated.

I will never forget the feeling of revulsion I had when they offered me those “papers” and stated that “it is wrong for your resolution to state that “1.5 million” Armenian men, women and children were killed by the actions of the Turkish government when the documents show that the documented number of fatalities is no more than “560,000”. Just roll that absurdity of an argument around in your collective consciences for a brief moment and after recovering from your feelings of nausea and revulsion look at the current day status of America’s policies and allegiances.

The power-brokers, corporatist apologists and billionaire self-interests, aided and abetted by their political dependents have continued their journey to capture all of the power and money they can accumulate regardless of the costs in human lives while abandoning any sense of humanity they may have once felt. This sociopathic narcissist we have representing the most powerful office in the world, and his Neanderthal-thinking supporters are plunging the world headlong into an apocalyptic world of inhumanity. These supporters/enablers are not limited to the Grahams, Jordans, and McCarthys of the political world. As long as Senator Coons cannot decide/declare that this aberration of a president is unfit to continue to serve I will not support any election bid that Sen. Coons pursues and will view him as an enabler and abettor of a criminal.

Emphasis added at the end there. I am not sure I would go that far, but I also find it hard to disagree with Kowalko’s statement there. This is a time for taking a stand and not for pretending you have to be an impartial unbiased juryperson.