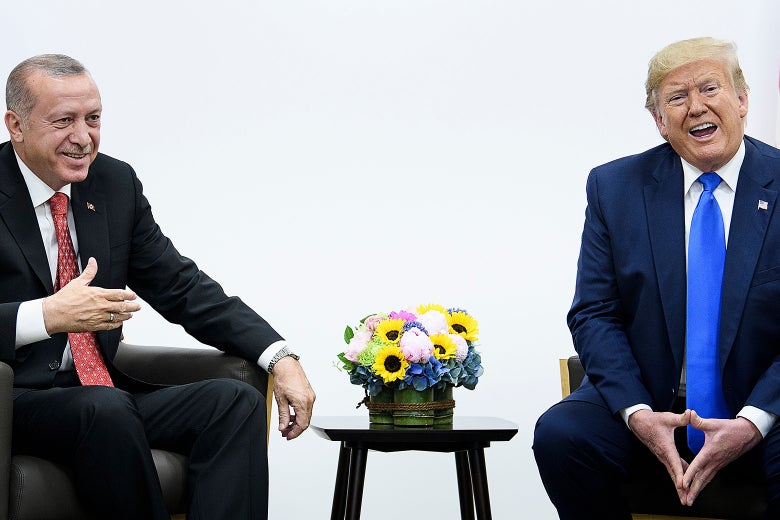 In a shocking surprise to everyone, President Trump has corruptly decided to immediately, as in today, withdraw all US forces from Syria, and then explicitly give the green light to Turkey to invade northeastern Syria. Present in northeastern Syria are our Kurdish allies who helped us fight ISIS in Syria and Iraq. Turkey hates the Kurds and wants to destroy them. Allowing a Turkish invasion means allowing a genocide of the Kurds.

NBC News’ Richard Engel reports “I just spoke to a Kurdish official. He said that the Americans have betrayed us. They have opened the door for a Turkish massacre.”

Associated Press: “The American withdrawal came just hours after the White House said U.S. forces in northeastern Syria will move aside and clear the way for an expected Turkish assault — essentially abandoning Kurdish fighters who fought alongside American forces in the yearslong battle to defeat the Islamic State group.”

New York Times: “Mr. Trump’s decision goes against the recommendations of top officials in the Pentagon and the State Department who have sought to keep a small troop presence in northeast Syria to continue operations against the Islamic State, or ISIS, and to act as a critical counterweight to Iran and Russia. Administration officials said that Mr. Trump spoke directly with President Recep Tayyip Erdogan of Turkey on the issue on Sunday.”

“The White House’s announcement that U.S. forces are pulling back from northeastern Syria to allow a Turkish offensive there took the Pentagon and the government’s Syria point man by surprise ⁠— and the decision defied the current thinking of President Trump’s national security leaders,” Politico reports.

Said retired Adm. James Stavridis: “Everyone was absolutely flabbergasted by this. I tell you that as a fact. Nobody saw it coming, and that is a real problem when you’re trying to conduct not only foreign policy … but also military operations. That kind of whipsawing effect is extremely detrimental, not only in this tactical situation, but strategically as our planners try and prepare in other theaters, from North Korea to Afghanistan.”

Said the source: “President Trump was definitely out-negotiated and only endorsed the troop withdraw to make it look like we are getting something—but we are not getting something. The U.S. national security has entered a state of increased danger for decades to come because the president has no spine and that’s the bottom line.”

Sen. Lindsey Graham (R-SC) is enraged over President Trump’s decision to abandon U.S. allies in northern Syria and took the rare step of challenging the president on Twitter and in a phone call to Fox News, calling it a “disaster in the making.” Said Graham: “If I’m an Isis fighter, I’ve got a second lease on life. So to those who think ISIS has been defeated, you will soon see.”

Fox & Friends host Brian Kilmeade blasted President Trump’s decision to withdraw troops from Syria. Said Kimeade: “What kind of message is that to the next ally that wants to side with us? All we did is arm them, and they did all the work. And now we say ‘good luck. Good luck surviving.’”

He added: “What a disaster.”

Former U.S. Ambassador to the United Nations Nikki Haley blastedPresident Trump’s decision to withdraw U.S. forces from Syria and allow Turkey to carry out an operation in the region. Said Haley: “We must always have the backs of our allies, if we expect them to have our back. The Kurds were instrumental in our successful fight against ISIS in Syria. Leaving them to die is a big mistake.”

Said McConnell: “I urge the President to exercise American leadership to keep together our multinational coalition to defeat ISIS and prevent significant conflict between our NATO ally Turkey and our local Syrian counterterrorism partners. Major new conflict between Turkey and our partners in Syria would seriously risk damaging Turkey’s ties to the United States and causing greater isolation for Turkey on the world stage.”

President Trump “dug in on his decision to pull U.S. troops out of northern Syria as Turkey prepares an operation in the region, while members of his own party lined up to criticize the move,” The Hill reports.

Trump said he has “great respect” for the prominent Republicans who are urging him to reconsider his strategy, but that “it’s time to come back home.”

He added: “We’ve been there for many, many, many years beyond what we were supposed to be. Not fighting. Just there. Just there. And it’s time to come back home.”

After the White House announced late last night the U.S. would be essentially approving a Turkish incursion into Syria — contrary to what had been long-standing policy — Ryan Lizza dug up a 2012 tweet from Ivanka Trump celebrating the launch of Trump Towers Istanbul.

Said Lizza: “This is why presidents divest. It is crazy that a president is making national security decisions like the one tonight when he has lucrative business relationships at stake in the country that will benefit.”

In an extremely contentious and heated interview, Sen. Ron Johnson (R-WI) declared that he does not trust the CIA or FBI while launching into a series of conspiratorial attacks on Democrats and intelligence officials regarding the Ukraine scandal, the Daily Beast reports.

Mark Bowden: “Military officers are sworn to serve whomever voters send to the White House. Cognizant of the special authority they hold, high-level officers epitomize respect for the chain of command, and are extremely reticent about criticizing their civilian overseers. That those I spoke with made an exception in Trump’s case is telling, and much of what they told me is deeply disturbing. In 20 years of writing about the military, I have never heard officers in high positions express such alarm about a president.”

“Trump’s pronouncements and orders have already risked catastrophic and unnecessary wars in the Middle East and Asia, and have created severe problems for field commanders engaged in combat operations. Frequently caught unawares by Trump’s statements, senior military officers have scrambled, in their aftermath, to steer the country away from tragedy. How many times can they successfully do that before faltering?”

“A federal judge on Monday rejected a bold argument from President Trump that sitting presidents are immune from criminal investigations, allowing the Manhattan district attorney’s office to subpoena eight years of the president’s personal and corporate tax returns,” the New York Times reports.

“The judge’s decision came a little more than a month after the Manhattan district attorney subpoenaed Mr. Trump’s accounting firm, Mazars USA, for his personal and corporate returns dating to 2011. The demand touched off a legal showdown that raised new constitutional questions and drew in the Justice Department, which supported the president’s request to delay enforcement of the subpoena.”

The Washington Post reports Trump’s lawyers “have already indicated that they will appeal.”

“As Rudy Giuliani was pushing Ukrainian officials last spring to investigate one of Donald Trump’s main political rivals, a group of individuals with ties to the president and his personal lawyer were also active in the former Soviet republic,” the AP reports.

“Their aims were profit, not politics. This circle of businessmen and Republican donors touted connections to Giuliani and Trump while trying to install new management at the top of Ukraine’s massive state gas company. Their plan was to then steer lucrative contracts to companies controlled by Trump allies.”

“President Trump has told friends and allies he worries about the stain impeachment will leave on his legacy,” Axios reports.

“In a phone call with House Republicans on Friday, Trump articulated why he really doesn’t want this. Impeachment, Trump said, is a ‘bad thing to have on your resume,’ according to a source on the call. Two other sources on the call confirmed the substance of the comment, but one said they recalled Trump phrasing it as ‘you don’t want it on your resume.’”

“These two Trump quotes might seem like throwaways on what was a lengthy and discursive call with allies. But sources who have discussed impeachment candidly with the president say these comments perfectly encapsulate how Trump feels about it: He believes it could help him get re-elected and win back the House. But he doesn’t want the history books recording Donald Trump as an impeached president.”

Portman also expressed dismay that Trump offered the services of Attorney General William Barr and the president’s personal attorney, Rudy Giuliani, to help the Ukrainians in the twin probes.

Politico: “In her first 14 months as Transportation secretary, Elaine Chao met with officials from Kentucky, which her husband Mitch McConnell represents in the Senate, vastly more often than those from any other state.”

“In all, 25 percent of Chao’s scheduled meetings with local officials of any state from January 2017 to March 2018 were with Kentuckians, who make up only about 1.3 percent of the U.S. population.”

“The fact that Chao’s calendar shows that 1 out of every 4 meetings with local officials was with Kentuckians is significant because the department has long maintained that it, and she, have shown no favoritism to the state represented by her husband, even while local officials from other states have complained about having trouble getting to see her.”

Washington Post: “The Supreme Court has a powerfully controversial docket for its term beginning Monday that will test Chief Justice John G. Roberts Jr.’s efforts to portray the institution as above the noisy and partisan battles of the moment.”

“Two unknowns — the health of the court’s oldest member, Justice Ruth Bader Ginsburg, and whether the court will be drawn into legal controversies arising from the House Democrats’ impeachment inquiry into President Trump — add to the uncertainty.”

Politico: “The tentacles of the Democratic impeachment investigation are extending far beyond the arms of President Donald Trump. The vice president’s office, acting chief of staff‘s office, State Department, Energy Department, Office of Management and Budget and Justice Department are among the government entities quickly finding themselves ensnared in the Democrats’ impeachment inquiry, joining a huge squad of White House lawyers, Cabinet officials, and national security staffers — many of them detailed from the Pentagon, CIA and elsewhere in the intel community — potentially tainted by the widening investigation.”

“The impeachment fight under Trump is quickly surpassing the reach of the presidential impeachment battles under Richard Nixon and Bill Clinton, swallowing even larger swaths of the federal government. The whistleblower complaint and the resulting investigative sprawl are making the probe harder for Trump and his White House to stamp out, with Democrats gaining new avenues to uncover damaging details that contradict Trump.”

New York Times: “One day in October 1992, four Republican congressmen showed up in the Oval Office with an audacious recommendation. President George Bush was losing his re-election race, and they told him the only way to win was to hammer his challenger Bill Clinton’s patriotism for protesting the Vietnam War while in London and visiting Moscow as a young man.”

“Mr. Bush was largely on board with that approach. But what came next crossed the line, as far as he and his team were concerned. ‘They wanted us to contact the Russians or the British to seek information on Bill Clinton’s trip to Moscow,’ James A. Baker III, Mr. Bush’s White House chief of staff, wrote in a memo later that day. ‘I said we absolutely could not do that.’”

Energy Secretary Rick Perry said he had no plans to resign now or next month, denying a report that he was expected to announce his resignation in November, Reuters reports.

He added: “They’ve been writing the story for at least nine months now. One of these days they will probably get it right, but it’s not today, it’s not tomorrow, it’s not next month.”