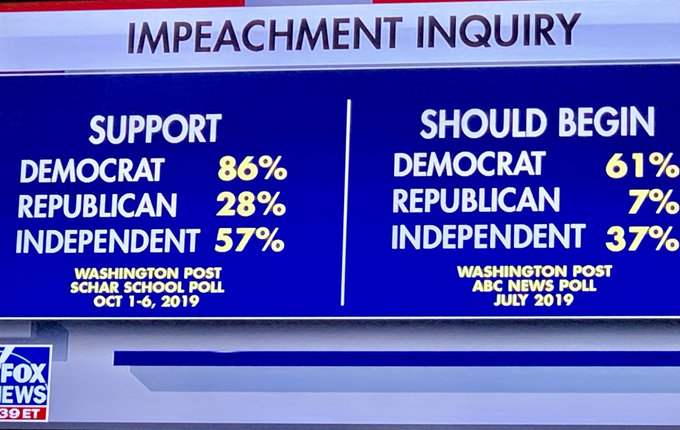 A new Washington Post-Schar School poll finds that, by a margin of 58% to 38%, Americans say the House was correct to begin an impeachment inquiry into President Trump.

Among all adults, 49% say the House should take the more significant step to impeach the president and call for his removal from office. Another 6% say they back the start of the inquiry but do not favor removing Trump from office, with the remainder undecided about the president’s ultimate fate. The results among registered voters are almost identical.

But the news gets worse for Trump and better for America in the crosstabs. A stunning 28% of Republicans overall support the House impeachment investigation — a 21-point jump from a Washington Post/ABC News poll in July — and 18% of Republicans already want the House to “vote to remove Trump from office” before the impeachment hearings are even in full swing.

A new Quinnipiac poll finds Elizabeth Warren leading the Democratic presidential field with 29%, followed by Joe Biden at 26%, Bernie Sanders at 16%, Pete Buttigieg at 4%, Kamala Harris at 3% and Andrew Yang at 3%.

No other candidate tops 2%.

Jonathan Bernstein: “Everyone seems to be more or less convinced that Elizabeth Warren is now the leading candidate, or perhaps that Warren and Joe Biden are co-leaders. Pundits are asking whether Biden can survive losing Iowa and New Hampshire, and whether his big polling lead in South Carolina can hold up. Those are fair questions. But I’m going to insist – one more time – that it’s still early.”

“Take Iowa. Yes, Warren now has a slim polling lead over Biden, with everyone else far behind. But a quick check of the historical record suggests things could still change radically. Four years ago, Donald Trump and Ben Carson were locked in a tie in Iowa. Ted Cruz and Marco Rubio were in third and fourth. Four months later, Cruz rose from 9% to 27% to take first place in the caucuses; Rubio went from 8% to 23%, with Trump narrowly edging him out for second place. On the Democratic side, Hillary Clinton’s numbers didn’t change much from October to February – but Bernie Sanders gained about 16 percentage points and almost beat her.”

“What about 2012? Early October polling had Mitt Romney on top, followed by three candidate – Herman Cain, Michele Bachmann and Rick Perry – who never went anywhere. Rick Santorum was in seventh place in the polls at 4%. He eventually surged to narrowly beat Romney in Iowa with almost 25% of the vote.”

Ron Brownstein: “This pattern of results signals that Trump’s vituperative response to the threat of impeachment — with his cries of ;treason,’ ‘coup’ and ‘civil war’ — may be energizing his supporters but is failing to persuade voters outside that core coalition. That’s a familiar pattern from other issues in his presidency, from his advocacy of a border wall to his push to repeal the Affordable Care Act. In all those confrontations, Trump displayed very little capacity to move public opinion in general toward his position.”

“So to generate more opposition to his possible impeachment, the President faces a tough assignment: He must convert people who disapprove of his overall job performance or don’t have an opinion about it.”

“John Hickenlooper raised more than $2.1 million for his U.S. Senate campaign in less than six weeks, a record haul in Colorado that affirms his Democratic front-runner status in a top-tier race,” the Colorado Sun reports.

If no candidate reaches 50% in the Saturday jungle prinary, a general two-candidate election will be held on November 16 with the top two finishers.

“President Trump’s campaign helped orchestrate rule changes at party conventions in dozens of states, including Georgia, to weaken a potential GOP insurrection before it can start,” the Atlanta Journal Constitutionreports.

“Three senior Trump campaign officials said on a conference call Monday that they pressed party officials in 37 states to make it harder for a Republican primary opponent to emerge at the nominating convention in Charlotte in August 2020.”

Jonathan Chait: “Most voters are locked in to one of the parties. The swing vote tends to be low-information voters with a hazy grasp of the issues. Impeachment is a signal to those voters that Trump has done something seriously wrong. It’s not a magic trick that works against every president — there needs to be misconduct people can easily understand, and which the news media covers as a serious scandal. This easily qualifies.”

“If Trump has any political strengths, it is that he is a low-information voter himself, and grasps how the political narrative plays out in snippets of cable-news chyrons drifting across screens in bars and airports. Trump has confided to allies that impeachment ‘looks bad on his résumé.’”

“Because his victory surprised so many people, Trump has a way of psyching out his opponents sometimes. There’s no real political magic here. Having the news dominated by a scandal even many Republicans can’t defend, with a constant drip of damning new details, is extremely unhelpful for the president.”

“The company behind the non-partisan news site RealClearPolitics has been secretly running a Facebook page filled with far-right memes and Islamophobic smears,” the Daily Beast reports. “Called ‘Conservative Country,’ the Facebook page was founded in 2014 and now boasts nearly 800,000 followers for its mix of Donald Trump hagiography and ultra-conservative memes.”

CBS News: “On the campaign trail, Elizabeth Warren often tells the story of how she was fired from her first teaching job in 1971 because she was pregnant, a pivotal moment that ultimately put her on a path to Harvard, the United States Senate, and quite possibly the presidency. But recently, several media outlets have questioned the veracity of these claims.”

Said Warren: “‘All I know is I was 22 years old, I was 6 months pregnant, and the job that I had been promised for the next year was going to someone else. The principal said they were going to hire someone else for my job.”

“Bernie Sanders has been sidelined for nearly a week — after failing for almost three days to disclose that he had a heart attack. It’s unclear when the 78-year-old senator will return to the stump. His campaign has yet to divulge the severity of his heart attack,” Politico reports.

“And that sequence of events unfolded as he’s been eclipsed in the polls by the other progressive icon in the race, Elizabeth Warren.”

“Three presidential electors in Washington state who voted for Colin Powell in 2016 rather than Hillary Clinton and were fined under state law, are asking the US Supreme Court to take up their appeal and decide whether a state can bind an elector to vote for the state’s popular vote winner,” CNN reports.

“If the Supreme Court agrees to hear the appeal of the so-called ‘faithless electors,’ it could thrust the justices into yet another high-passion political fight in the heat of the 2020 presidential election.”