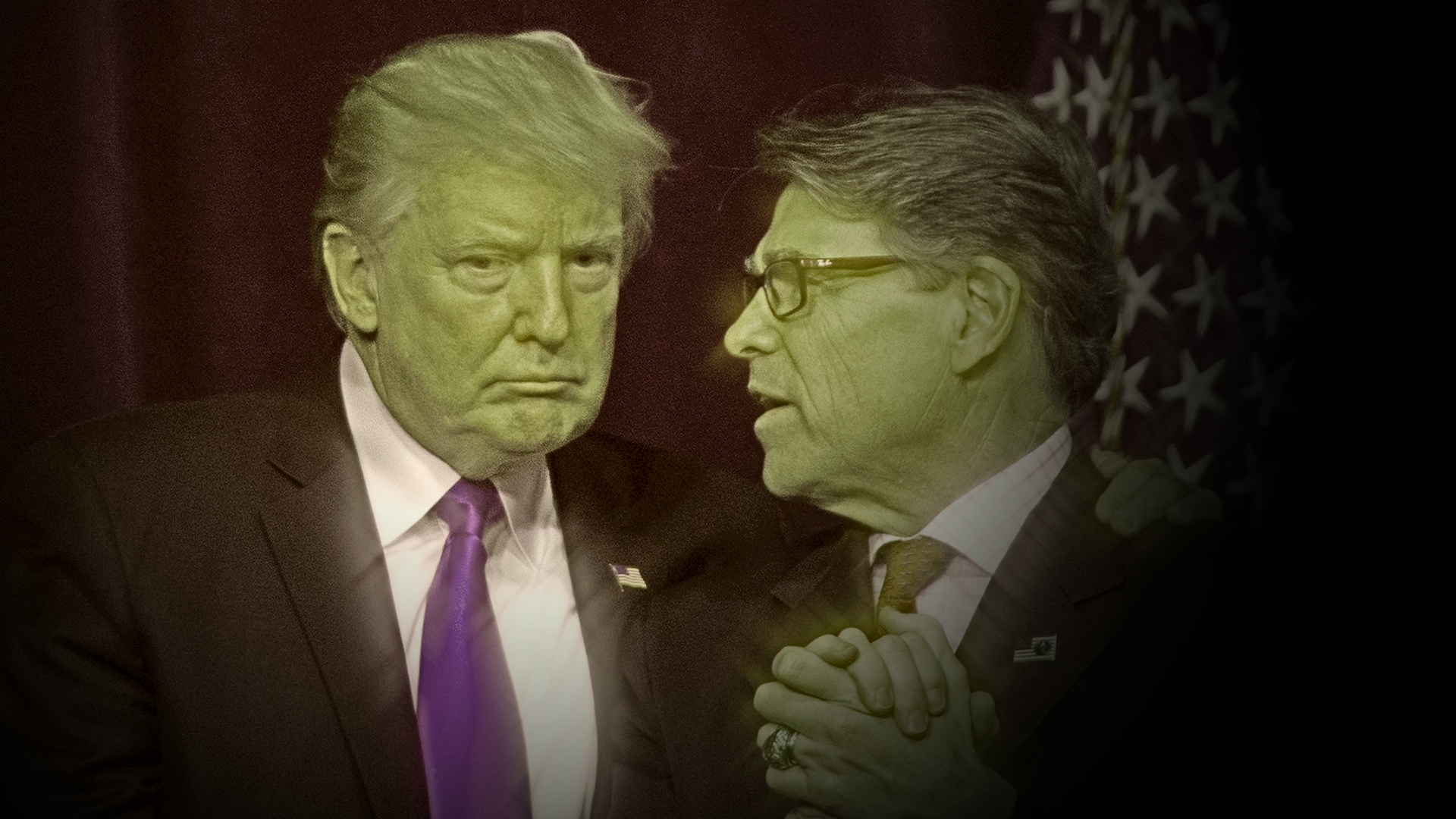 “President Trump told House Republicans that he made his now infamous phone call to Ukrainian President Volodymyr Zelensky at the urging of Energy Secretary Rick Perry — a call Trump claimed he didn’t even want to make,” Axios reports.

Wait… wait… I thought the call was perfect? The most perfect good call in all history of telecommunications? Now you didn’t want to make it and are throwing Secretary Perry under the bus while he is on his way out the door? Further, no one before in human history has ever said anything was Rick Perry’s idea.

“Trump made these comments during a conference call with House members on Friday.” Said Trump: “Not a lot of people know this but, I didn’t even want to make the call. The only reason I made the call was because Rick asked me to.” “Another source on the call said Trump added that ‘more of this will be coming out in the next few days’ — referring to Perry.”

It’s notable that this switch in tactics (Trump no longer defending the call but now blaming others for it) follows a very notable defection, that of Tucker Carlson from the Trump Perfect Call defense.

Tucker Carlson and Neil Patel: “Donald Trump should not have been on the phone with a foreign head of state encouraging another country to investigate his political opponent, Joe Biden. Some Republicans are trying, but there’s no way to spin this as a good idea.”

“Like a lot of things Trump does, it was pretty over-the-top. Our leaders’ official actions should not be about politics. Those two things need to remain separate. Once those in control of our government use it to advance their political goals, we become just another of the world’s many corrupt countries. America is better than that.”

Benjy Sarlin: “There’s a pretty massive tactical signal here, which is to pivot away from defending the behavior (which has been a brutal slog so far for those who’ve tried) and instead toward arguing impeachment goes too far.”

“Secretary of State Mike Pompeo defiantly insisted on Saturday in Greece that the Trump administration was right to ask Ukrainian officials to investigate claims of election interference in the 2016 American presidential campaign, bolstering a widely debunked conspiracy theory that had already been dismissed by his own diplomatic envoy,” the New York Times reports.

“A second intelligence official who was alarmed by President Trump’s dealings with Ukraine is weighing whether to file his own formal whistle-blower complaint and testify to Congress,” the New York Times reports.

“The official has more direct information about the events than the first whistle-blower, whose complaint that Mr. Trump was using his power to get Ukraine to investigate his political rivals touched off an impeachment inquiry. The second official is among those interviewed by the intelligence community inspector general to corroborate the allegations of the original whistle-blower, one of the people said.”

“A new complaint, particularly from someone closer to the events, would potentially add further credibility to the account of the first whistle-blower, a CIA officer who was detailed to the National Security Council at one point.”

“This comes after nearly a month of White House refusals to comply with House investigations into whether Trump jeopardized national security by pressing Ukraine to interfere in the 2020 presidential election, and by withholding security assistance provided by Congress to help Ukraine counter Russian aggression, per the subpoena. The committees are demanding documents by Oct. 18.”

Washington Post: “Starting long before revelations about Trump’s interactions with Ukraine’s president rocked Washington, Trump’s phone calls with foreign leaders were an anxiety-ridden set of events for his aides and members of the administration, according to former and current officials. They worried that Trump would make promises he shouldn’t keep, endorse policies the United States long opposed, commit a diplomatic blunder that jeopardized a critical alliance, or simply pressure a counterpart for a personal favor.”

“But Trump’s July 25 call with Ukrainian President Volodymyr Zelensky went beyond whether the leader of the free world had committed a faux pas, and into grave concerns he had engaged in a possible crime or impeachable offense.”

Key takeaway: “The first call Trump made that set off alarm bells came less than two weeks after his inauguration. On Jan. 28, Trump called Putin for what should have been a routine formality: accepting a foreign leader’s congratulations. Former White House officials described Trump as ‘obsequious’ and ‘fawning,’ but said he also rambled off into different topics without any clear point, while Putin appeared to stick to formal talking points for a first official exchange.”

Sen. Susan Collins (R-ME) told the Bangor Daily News that it was “completely inappropriate” for President Trump to urge China to investigate Joe Biden and his son, Hunter.

Said Collins: “I thought the president made a big mistake by asking China to get involved in investigating a political opponent… It’s completely inappropriate.”

So I guess you can expect Trump to attack Collins, because he spent Saturday venting his rage at Romney. He lashed out at Romney after the Republican senator criticized Trump over his dealings with Ukraine.

Said Trump: “Somebody please wake up Mitt Romney and tell him that my conversation with the Ukrainian President was a congenial and very appropriate one.” He added: “If Mitt worked this hard on Obama, he could have won. Sadly, he choked!” In a subsequent tweet he called Romney a “pompous ass” who has been fighting me from the beginning. He then called for Romney to be impeached. Senators cannot be impeached. Trump apparently did not know that.

“North Korea’s top negotiator said late on Saturday that working-level nuclear talks in Sweden between officials from Pyongyang and Washington had been broken off, dashing prospects for an end to months of stalemate,” Reuters reports.

Harry Enten: “Throughout the Trump administration, Democrats were arguing among themselves over whether to impeach or, at minimum, start an impeachment inquiry against the President. One of the political arguments against it was that it would cause an electoral backlash — that is, trying to impeach Trump would allow his consistently low approval ratings to rise.”

“So far, that hasn’t happened. Trump, at this point, has not improved his position following the impeachment inquiry. If anything, his numbers have dipped.”

“The State Department has been deeply shaken by the rapidly escalating impeachment inquiry, as revelations that President Trump enlisted diplomats to dig up dirt on a political rival threaten to tarnish its reputation as a nonpartisan arm of U.S. foreign policy,” the AP reports.

“A department where morale was already low under a president who, at times, has seemed hostile to its mission is now reeling from days of disclosures that place it at the center of an escalating political scandal, say former diplomats who fear that the turmoil will damage American foreign policy objectives around the world.”

“For months, President Trump’s allies have been raising expectations for prosecutor John Durham’s investigation into the origins of the Russia probe, predicting that he will uncover a deep state plot to stage a ‘coup’ against the president,” Politico reports.

“But in the five months since Attorney General Bill Barr tapped Durham to investigate the origins of the Russia probe, and whether any inappropriate ‘spying’ occurred on members of the Trump campaign, he has not requested interviews with any of the FBI or DOJ employees who were directly involved in, or knew about, the opening of the Russia investigation in 2016, according to people familiar with the matter. The omission raises questions about what, exactly, Durham—alongside Attorney General Bill Barr—has been investigating.”

“Gordon Sondland, the U.S. ambassador to the European Union ensnared in the impeachment inquiry of President Trump, will give a deposition to House committees investigating the president’s pressure on a foreign leader to investigate a domestic political rival,” the Washington Post reports.

“Sondland will meet behind closed doors Tuesday with the three panels — Intelligence, Foreign Affairs and House Oversight — spearheading the probe.”

“What was implausible is now possible. If the vote were held in secret, says Republican strategist Mike Murphy, 30 Republicans would vote today for impeachment. Former Republican senator Jeff Flake puts the likely number at 35.”

“Will they go public? Twenty-three Republicans are up for re-election next fall. Most are from red states that support Trump. But in a few months they’ll be safe from primary challenges. They’ll be free to vote him out.”

“The action, which is set to take effect in 30 days, would require applicants, including people with ties to family members in the U.S., to show they can get health insurance or prove their financial ability to pay for medical care, the people said. The action wouldn’t apply to refugees or immigrants who have won asylum.”

“President Trump has ordered a substantial reduction in the staff of the National Security staff, as the White House confronts an impeachment inquiry touched off by a whistle-blower complaint related to the agency’s work,” Bloomberg reports.

“Weeks before the whistleblower’s complaint became public, the CIA’s top lawyer made what she considered a criminal referral to the Justice Department about the whistleblower’s allegations that President Trump abused his office in pressuring the Ukrainian president,” NBC Newsreports.

“The move by the CIA’s general counsel, Trump appointee Courtney Simmons Elwood, meant she and other senior officials had concluded a potential crime had been committed, raising more questions about why the Justice Department later closed the case without conducting an investigation.”

Chinese Foreign Minister Wang Yi told the Global Times that China “will not interfere in the internal affairs of the U.S.,” after President Trump urged Beijing to probe his political rival Joe Biden amid an impeachment inquiry in Washington.

Said Wang: “We trust that the American people will be able to sort out their own problems.”