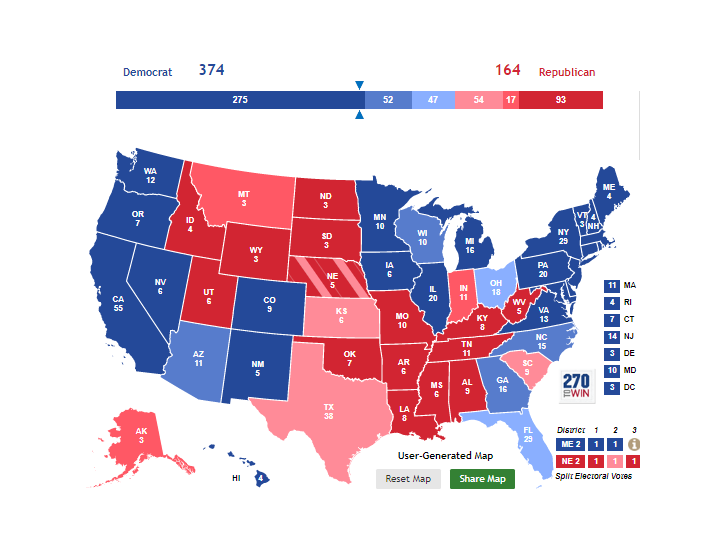 A new Public Policy Polling survey finds that President Trump has a 40% to 55% approval spread and trails a generic Democratic opponent 52% to 41% for reelection.

“These numbers are about as bad as we’ve ever found for him, and indicate there’s no backlash coming from the movement of House Democrats toward impeachment in the last week.”

“Joe Biden’s presidential campaign says President Trump is ‘lying about the one Democrat he doesn’t want to face’ in the first new spot to be included in the former vice president’s $6 million broadcast and digital advertising push across the four early-voting states,” CNN reports.

“The 30-second ad, titled ‘Unhinged,’ focuses on Biden’s response to Trump’s public and private efforts to get foreign governments to investigate Biden and his son Hunter. It will run in Iowa, New Hampshire, South Carolina and Nevada.”

“Elizabeth Warren’s presidential campaign has fired its national organizing director, Rich McDaniel, after an investigation into allegations of what it called ‘inappropriate behavior,’” Politico reports.

“Leading donors for Joe Biden convened this weekend for their first donor retreat since he announced his candidacy and struck a determined posture as Mr. Biden’s campaign found itself under assault from President Trump, losing its clear front-runner status and lapped in the money chase by multiple Democratic rivals, most notably Senator Elizabeth Warren,” the New York Times reports.

“Over cocktails on Friday evening and a Saturday spent in a drab hotel conference room, Mr. Biden’s top financiers and fund-raisers received strategy briefings and PowerPoint presentations, and plotted the path forward for the former vice president, who suddenly found himself in fourth place in the money chase.”

A new Economist/YouGov survey finds Americans support the House impeachment proceedings into President Trump by 50% to 39%.

If the House ultimately votes to impeach Trump, a majority want the Senate to convict and remove him from office, 51% to 39%.

“Biden’s campaign has long framed his candidacy around the idea that he can beat Trump in a head-to-head contest, particularly in the battleground states that were central to Trump’s 2016 victory over Hillary Clinton.”

A heart attack caused Sen. Bernie Sanders to be hospitalized earlier this week, the Washington Post reports.  He was released from the hospital Friday after being admitted on Tuesday.

“Iranian hackers targeted President Trump’s re-election campaign, in a sign of how cyberattacks could become a fixture of the 2020 presidential election,” the New York Times reports.

“It was not clear what information was taken in the attack on the Trump campaign.”

“Former UN ambassador Samantha Power said Friday she would not rule out running for the US Senate seat held by Democratic Senator Elizabeth Warren, should Warren be elected president,” the Boston Globe reports.

“Then again, she also said she wouldn’t rule out the job of Sox general manager, a job that’s actually open right now.”

New York Times: “For more than a week, President Trump had been hurling unfounded accusations about Mr. Biden, his son Hunter and their dealings in Ukraine. Mr. Biden and his advisers debated whether to mount a fierce counterattack or to stick to a set of policy arguments he had been planning to roll out. Bad news loomed in the background: Mr. Biden’s poll numbers had already grown wobbly, his fund-raising was uneven, and cable news was flashing chyrons by the hour showing Mr. Trump’s wild claims.”

“Mr. Biden himself was equivocating: He wanted to defend and protect his son, but he also believed the president was baiting him into a dirty fight. And as a lifelong adherent to congressional tradition, Mr. Biden was wary of acting hastily as an impeachment inquiry was getting underway.”