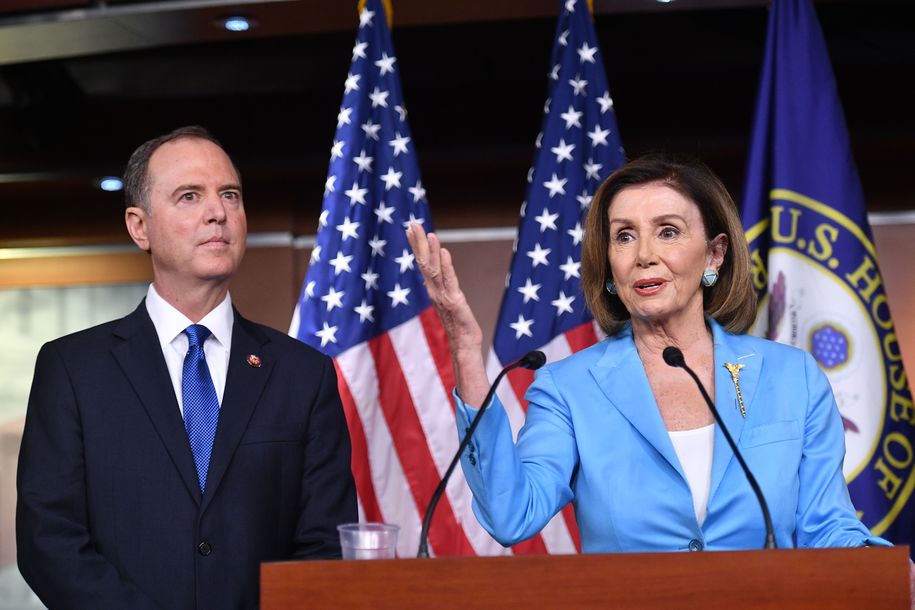 House Intelligence Committee Chairman Adam Schiff (D-CA) learned about the outlines of a CIA officer’s concerns that President Trump had abused his power days before the officer filed a whistle-blower complaint, the New York Times reports.

“The early account by the future whistle-blower shows how determined he was to make known his allegations that Mr. Trump asked Ukraine’s government to interfere on his behalf in the 2020 election. It also explains how Mr. Schiff knew to press for the complaint when the Trump administration initially blocked lawmakers from seeing it.”

Schiff and his committee did everything according to procedure, and was backed up by Republican Intel Chief Senator Richard Burr. But facts never stopped Republicans before….

Said Schiff: “Let’s not make any mistake here. The president wants to make this all about the whistleblower, and suggests people that come forward with evidence of his wrongdoing are somehow treasonous and should be treated as traitors and spies. This is a blatant effort to intimidate a witness. It’s an incitement of violence.”

Wall Street Journal: “The whistleblower is expected to testify before the House Intelligence Committee as soon as early next week, though his attorneys and the committee continue to negotiate logistics, including a time and place.”

President Trump said he likely will bring lawsuits against some of the people involved in the investigation into whether he or his 2016 election campaign colluded with Russia, Reuters reports.

Russian President Vladimir Putin said that he “would not mind if the White House made public his talks with President Trump at a summit meeting last year, because there was nothing incriminating in their conversations,” the New York Times reports.

“Just five days earlier, Mr. Putin’s spokesman had said the Kremlin would not want records of the two presidents’ talks released. But Mr. Putin, a former K.G.B. spy, said his previous job had taught him that any conversation he had could be published.”

“You know, if it wasn’t for your show, Sean, they would destroy him absolutely. You are the difference between Donald J. Trump and Richard Nixon.” — Geraldo Rivera, speaking to Sean Hannity.

“The House threatened on Wednesday to subpoena the White House if it did not comply by Friday with requests for a broad range of documents related to an alleged scheme to pressure Ukraine into investigating a leading political rival of President Trump,” the New York Times reports.

Said House Oversight Committee Chairman Elijah Cummings: “I do not take this step lightly. Over the past several weeks, the committees tried several times to obtain voluntary compliance with our requests for documents, but the White House has refused to engage with — or even respond to — the committees.”

Three House committee chairmen sent a letter addressed to Deputy Secretary of State John Sullivan on the grounds that the Secretary of State Mike Pompeo “now appears to have an obvious conflict of interest,” the Wall Street Journal reports.

Pompeo’s participation in the call between President Trump and the Ukrainian president, the lawmakers wrote, renders him a witness in the congressional impeachment inquiry, and as a result, “he should not be making any decisions regarding witness testimony or document production in order to protect himself or the president.”

Secretary of State Mike Pompeo admitted Wednesday that he was on the July 25 phone call in which President Trump asked Ukrainian President Volodymyr Zelensky to investigate Joe Biden, CNN reports. Said Pompeo: “I was on the phone call.”

Pompeo had previously been coy about his role in the call, giving an evasive answer to ABC News when asked directly about the call last week.

Daily Beast: “When Rudy Giuliani appeared on cable news programs last week, he hammered home one talking point over and over again: The State Department knew he was trying to dig up dirt on Joe Biden and his son Hunter.”

“Giuliani’s on-air appearances threw the department into a tizzy, forcing Mike Pompeo to try to put a lid on the crisis of confidence bubbling up under him. For Pompeo, solving the problem meant finding someone to blame—and there was only one individual who fit the mold: former U.S. representative for Ukraine negotiations Kurt Volker.”

“Several U.S. officials told The Daily Beast the former Ukraine negotiator said openly that he was not ready to leave his position… Volker is set to go to Capitol Hill on Thursday with the backing of a cadre of current and former diplomats.”

“The Justice Department told White House personnel on Wednesday that they must preserve all notes regarding President Trump’s meetings and phone calls with foreign leaders,” CNN reports.

David Rohde suggests Attorney General William Barr “might want to recall the example of John Mitchell, who, in 1975, became the first—and only—former Attorney General of the United States to be sent to prison.”

“Mitchell served as Richard Nixon’s Attorney General from 1969 to 1972, and then as chairman of Nixon’s 1972 Presidential reelection campaign. As campaign chairman, he oversaw the Watergate break-ins and then participated in the coverup. Unlike other aides who broke with Nixon and implicated the President, Mitchell declined to reveal his conversations with the President. He was convicted by a jury of his peers of conspiracy, obstruction of justice, and perjury for his role in Watergate. Mitchell served nineteen months in federal prison before being released, for medical reasons.”

“For many in the American legal community, though, Mitchell’s actions before Watergate were more troubling. While serving as Attorney General, Mitchell hatched secret—and, at times, bizarre—plots to aid Nixon politically. He investigated government officials and journalists suspected of leaking damaging information about the President. He prosecuted opponents of the Vietnam War. And he controlled a secret slush fund used to smear Democratic Presidential candidates deemed a threat to Nixon. In one simultaneously abhorrent and amateurish act, Mitchell approved a payment of ten thousand dollars to a faction of the American Nazi Party in order to carry out a failed effort to remove Governor George Wallace from a Presidential ballot in California. Nixon aides believed that supporters of Wallace—an avowed segregationist running as a third-party candidate—would shift their votes to Nixon.”

David Frum: “Donald Trump may have no impeachment war room, but he does have an impeachment strategy. He deployed it this past weekend.”

“It’s the same strategy he brought to his presidential campaign, then to his presidency: all base, all the time. In 1998 and ’99, Bill Clinton directed his anti-impeachment messaging to voters who did not necessarily approve of him, but who feared impeachment as disruptive. Trump’s message is aimed only at his most all-in supporters, those who see him as a victim of plots and persecution by shadowy, unseen forces.”

“It’s as if the Trump campaign has read the Clinton playbook, and at every turn opted for the opposite.”

Janan Ganesh: “Since the Ukraine scandal emerged, it has been natural to assume total Republican commitment to Mr Trump. Such is the tribalism of a riven nation.”

“There is another scenario, though, and it does not stop at one or two Republicans peeling away. Instead, to save itself, the GOP establishment might desert Mr Trump as swiftly and unexpectedly as it bent the knee to him in 2016. Whether this manifests as the Senate supermajority needed for his ousting is still hugely doubtful. But there are other kinds of defiance: a staff exodus from the White House, senatorial refusals to defend him, the turning of implicated parties on one another.”

“Skeptics will say this requires the party to wake up from its cringing passivity. But it has been doing that, in fits and starts, for a while now.”

New York Times: “The telephone line had been secretly set up. President Trump waited on the other end. All President Hassan Rouhani of Iran had to do was come out of his hotel suite and walk into a secure room where Mr. Trump’s voice would be piped in via speaker.”

“Mr. Rouhani and his aides were blindsided by the offer, presented to them by President Emmanuel Macron of France on an unannounced visit last Tuesday night to their quarters at the Millenium Hilton Hotel near the United Nations, where world leaders had converged for the annual General Assembly.”

New Yorker: “The call to Trump’s line came through at nine-thirty, according to sources familiar with events that evening. Macron took the call. But Rouhani never emerged from his room.

John Harwood: “The Republican defenses for President Trump’s conduct on Ukraine simply don’t hold up. At first glance, that can be hard to discern. Trump, his aides and select allies in Congress have feverishly sought to redirect a whistleblower’s complaints toward Democratic adversaries. Yet even cursory scrutiny of evidence that has emerged so far knocks down assorted GOP arguments like shanties in a hurricane.”