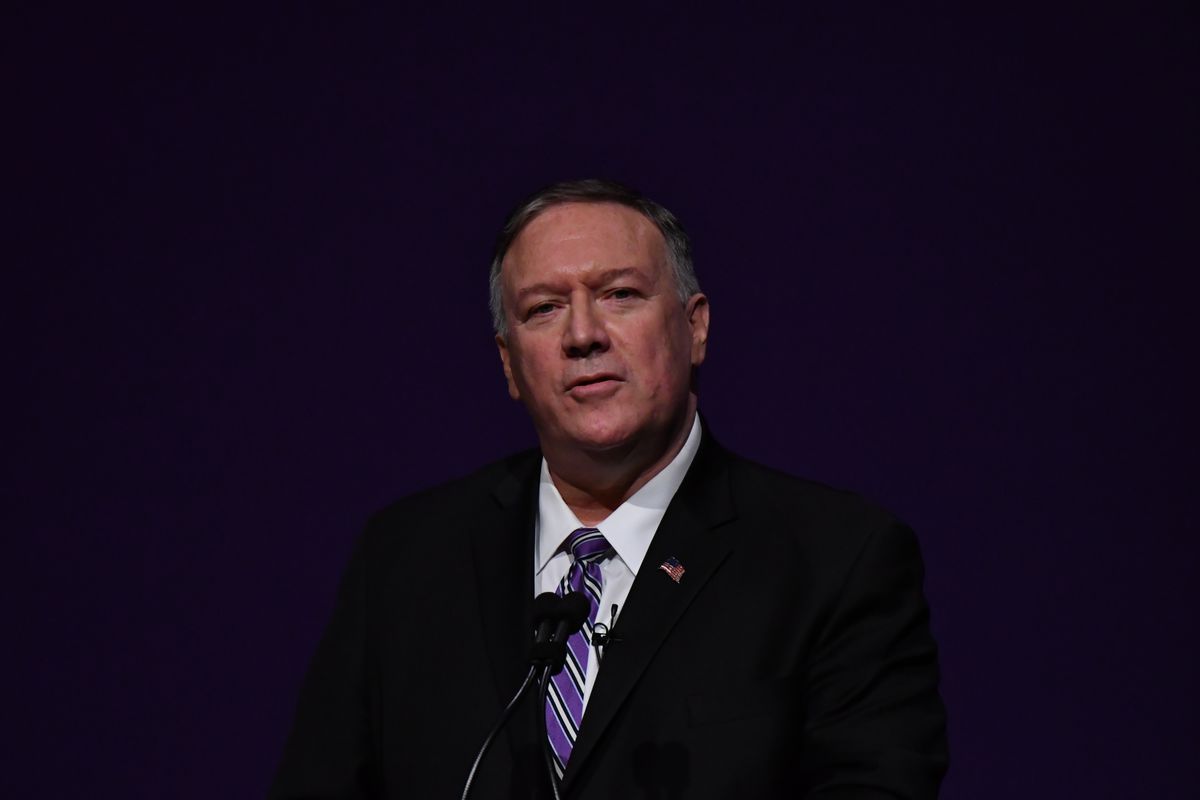 Secretary of State Mike Pompeo vowed to block efforts to “bully” State Department officials to testify about President Trump pressuring Ukraine to investigate Joe Biden, the Wall Street Journal reports. The Washington Post reports that those officials will not show up for their depositions this week.

However, Former Special Representative for Ukraine Kurt Volker will still testify in the House’s impeachment inquiry this week. According to  multiple reports on Tuesday, Volker still plans to give a deposition to the House Foreign Affairs, Intelligence, and Oversight Committees on Thursday despite Pompeo’s defiant letter to the committee chairs declaring that he would “use all means at my disposal” to block their attempts to interview State Department staffers about the sprawling Ukraine scandal.

“The chairmen of three committees leading the House’s impeachment inquiry warned Secretary of State Mike Pompeo on Tuesday that preventing witnesses from speaking with Congress could be interpreted as evidence of obstruction,” The Hill reports.

From their letter: “Any effort to intimidate witnesses or prevent them from talking with Congress — including State Department employees — is illegal and will constitute evidence of obstruction of the impeachment inquiry. In response, Congress may infer from this obstruction that any withheld documents and testimony would reveal information that corroborates the whistleblower complaint.”

“The State Department’s Inspector General is expected to brief staffers from several House and Senate committees on Wednesday afternoon about documents obtained from the department’s Office of the Legal Adviser,” ABC News reports.

“The unusual nature and timing – during a congressional recess – of the briefing suggest it may be connected to a recent intelligence community whistleblower allegation.”

New York Times: “The Oval Office meeting this past March began, as so many had, with President Trump fuming about migrants. But this time he had a solution. As White House advisers listened astonished, he ordered them to shut down the entire 2,000-mile border with Mexico — by noon the next day.”

“The advisers feared the president’s edict would trap American tourists in Mexico, strand children at schools on both sides of the border and create an economic meltdown in two countries. Yet they also knew how much the president’s zeal to stop immigration had sent him lurching for solutions, one more extreme than the next.”

“Privately, the president had often talked about fortifying a border wall with a water-filled trench, stocked with snakes or alligators, prompting aides to seek a cost estimate. He wanted the wall electrified, with spikes on top that could pierce human flesh. After publicly suggesting that soldiers shoot migrants if they threw rocks, the president backed off when his staff told him that was illegal. But later in a meeting, aides recalled, he suggested that they shoot migrants in the legs to slow them down. That’s not allowed either, they told him.”

Charlie Warzel: “Invoking civil war — even indirectly — was once a third rail of modern American presidential rhetoric. Though Mr. Trump in the past has openly toyed with illiberal notions (ignoring term limits, not accepting election results should he lose), his casual suggestion that his ouster might lead to bloodshed felt like uncharted territory.”

“It doesn’t matter that we’re not on the brink of a civil war; the threat as outlined by right-wing media is intended to inspire fear in liberals and conservatives alike. For conservatives, it’s the notion that Democrats will stop at nothing to get rid of Mr. Trump and will marshal the forces of the “deep state” to right the wrongs of the 2016 election. For liberals, it is a warning: Don’t push churchgoing, gun-loving conservatives too far, or there’ll be dangerous consequences.”

“A week after House Democrats jump-started their impeachment inquiry, the White House has yet to converge on any single plan, strategy or even unified messaging to fight back,” Politico reports.

“All the talk about setting up a so-called war room inside the West Wing, similar to the approach of the Clinton White House, has gone nowhere. Acting White House chief of staff Mick Mulvaney, other top aides, lawyers and Trump advisers have been jockeying among their own internal factions for control of the approach or messaging. And President Donald Trump has expressed little interest in responding to House Democrats in such a conventional manner, preferring to deploy his own messaging on Twitter.”

“The Trump White House upgraded the security of the National Security Council’s top-secret codeword system in the spring of 2018, as part of an effort to ferret out and deter leaks,” Politico reports.

“The changes included a new log of who accessed specific documents in the NSC’s system —known as NICE or ‘NSC Intelligence Collaboration Environment’—and was designed in part to prevent leaks of records of the president’s phone calls with foreign leaders and to find out the suspected leaker if transcripts did get disclosed.”

A former National Security Council official speaks to Politico: “[Trump’s calls with foreign leaders] were pretty much what you would expect, you can take the first part of the Zelensky call with all of the over the top effusive praise and basically copy and paste onto pretty much any head of state call with Trump, whether it was Emmanuel Macron or Vladimir Putin. Every one of them knew to start the call by praising him for the thing that he had just done that week.”

Of the Putin calls, the official said: “They were certainly the type of thing that you would not want in public because they were just really embarrassing from the standpoint of just national pride.”

Over the past 72 hours, Trump has:

“President Trump continued to escalate his scorched-earth campaign against a whistleblower who accused him of pressuring Ukraine to investigate his political rivals, even as new evidence emerged Monday that he and his administration are urging other governments to provide assistance to a related Justice Department inquiry that has been pushed by the president,” the Washington Post reports.

“Trump said he was trying to ‘find out about’ the whistleblower Monday, the latest move in an increasingly frenetic counterassault targeting the anonymous intelligence officer and top Democrats leading the impeachment inquiry. The comments came as his allies struggled to coalesce around a clear strategy to respond to a fast-moving and quickly mounting threat to his presidency.”

Hillary Clinton said that she believes the “gutsiest” thing she ever did outside of public life was deciding to stay married to former President Bill Clinton, Politico reports. The candid remark from Clinton came during an appearance with her daughter, Chelsea Clinton, to promote their new book, The Book of Gutsy Women.

When posed the same question, Chelsea Clinton appeared caught off guard: “Oh, goodness, I think I’m so overwhelmed by my mother’s answer that I’m a bit out of words.”

“As President Trump and his allies attack the whistleblower that kicked off the House’s impeachment inquiry, the still unidentified person gained a powerful ally on Tuesday: Republican Sen. Chuck Grassley,” Politicoreports.

“The most senior GOP senator has fashioned a career on protecting whistleblowers during presidencies of both parties. And in the middle of one of the most tempestuous political storms in two decades, the seventh-term Iowan is sticking to his position even if it’s at odds with the president himself.”

Sources close to House Intelligence Committee Chairman Adam Schiff (D-CA) tell the New Yorker that Democrats in Congress are deeply worried about President Trump using Twitter to incite violence and to direct it at specific lawmakers.

Louisiana Governor John Bel Edwards (D) blamed tariffs for the bankruptcy of Bayou Steel in his state, Bloomberg reports. Said Edwards: “Louisiana is among the most dependent states on tariffed metals, which is why we continue to be hopeful for a speedy resolution to the uncertainty of the future of tariffs.”

Related from CNBC: “A gauge of U.S. manufacturing showed the lowest reading in more than 10 years in September as exports dived amid the escalated trade war.”

“Rudy Giuliani, the outspoken personal attorney for Donald Trump, has hired his own lawyer to represent him in the House’s fast-moving impeachment investigation into the president,” Politico reports.

“The former New York mayor tapped Jon Sale, a former Watergate prosecutor and assistant U.S. attorney, in what’s shaping up to be a battle with Democrats over documents tied to Giuliani’s efforts to pressure Ukraine’s leader on behalf of the president to investigate Joe Biden.”

President Trump congratulated the authoritarian regime in China on the 70th anniversary of communist rule.

“Lawyers for the House of Representatives revealed on Monday that they have reason to believe that the grand-jury redactions in special counsel Robert Mueller’s report show that President Trump lied about his knowledge of his campaign’s contacts with WikiLeaks,” Politico reports.

“The attorneys made the stunning suggestion in a court filing as part of the House Judiciary Committee’s bid for Mueller’s grand-jury materials, which have remained secret by law.”

President Trump’s two highest-profile lawyers are struggling to get on the same page in the face of an impeachment inquiry launched by congressional Democrats last week, the Wall Street Journal reports.

“The president’s relationships with his private lawyer, Rudy Giuliani, who once aspired to be his attorney general, and the man who currently has that post, William Barr, are complicating White House efforts to build a legal and public-relations strategy to keep Mr. Trump in office.”

0 comments on “What Now?! – Pompeo Obstructs”