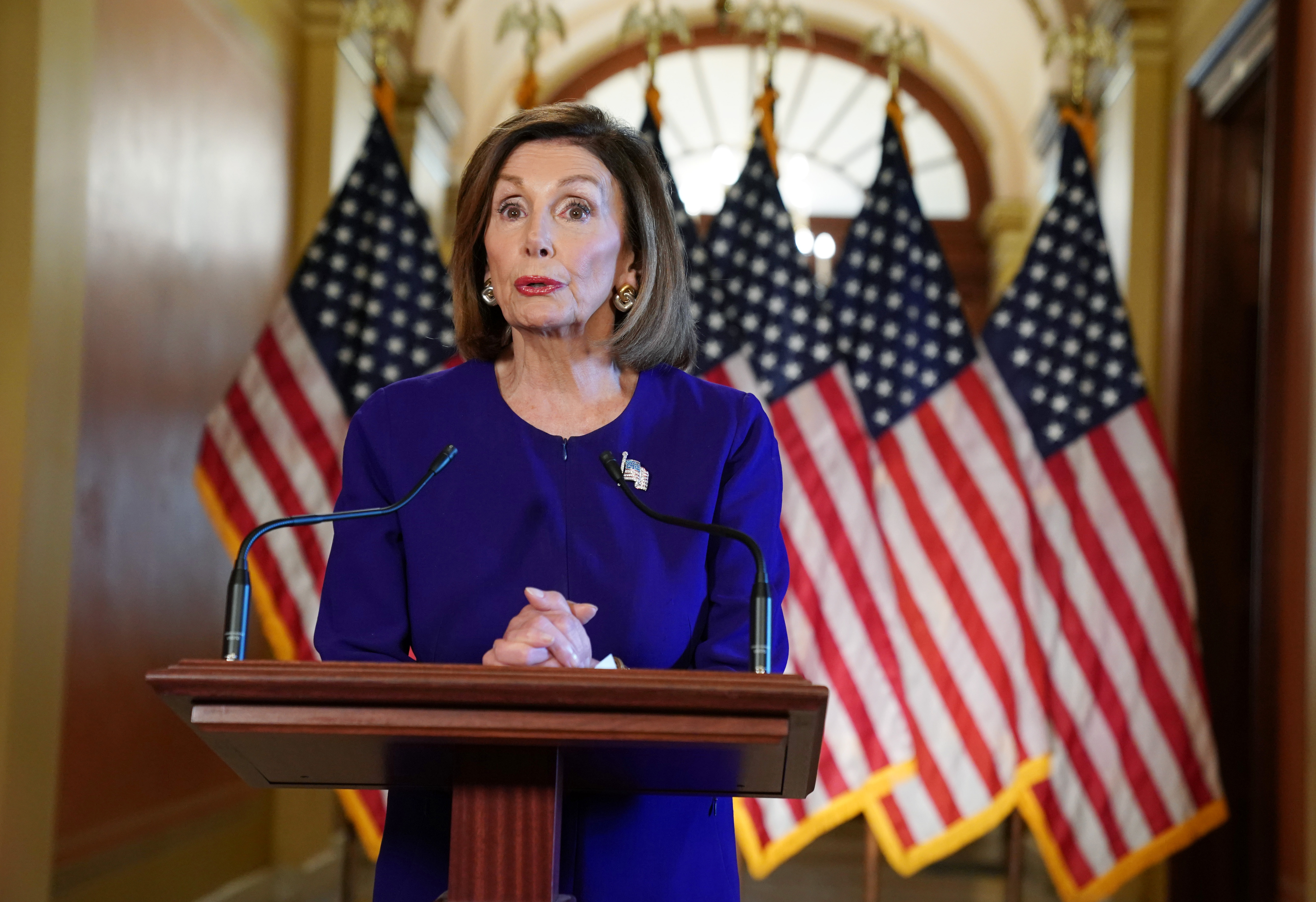 House Speaker Nancy Pelosi officially launched impeachment proceedings against President Donald Trump on Tuesday afternoon in one of the most consequential moments in the Trump presidency.

“The actions of the Trump presidency revealed dishonorable fact of the President’s betrayal of his oath of office, betrayal of our national security, and betrayal of the integrity of our elections,” Pelosi said. “Therefore, today I’m announcing the House of Representatives is moving forward with an official impeachment inquiry.”

House Intelligence Committee Chairman Adam Schiff (D-CA) tweeted that the whistleblower who first raised alarm about President Trump’s conversations with the Ukrainian president wants to speak to his panel, and that they are expecting the testimony “as soon as this week.”

President Trump tweeted that he has authorized the release of a transcript of his July conversation with Ukrainian President Volodymyr Zelensky. Good, now release the full declassified and unredacted whistleblower complaint and permit everyone to testify without the invocation of privilege or national security. Releasing the perhaps heavily edited transcript is nothing. Nixon did it and his transcripts were frauds.

And in what is the most shocking moment today, the Senate voted unanimously Tuesday to give the whistleblower report filed against President Donald Trump to the House and Senate Intelligence committees.

“Even as the House is ramping up its investigation into the Trump administration’s dealings with Ukraine, the Senate Intelligence Committee has opened its own inquiry and is seeking a quick interview with the whistleblower who filed the initial complaint with the intelligence community’s inspector general,” Yahoo News reports.

“The White House is preparing to release to Congress by the end of the week both the whistleblower complaint and the Inspector General report that are at the center of House Democrats’ impeachment inquiry, reversing its position after withholding the documents from lawmakers,” Politico  reports.

“The move shows the level of seriousness with which the administration is now approaching the House‘s new impeachment proceedings, even as President Trump publicly tries to minimize the inquiry as a “witch hunt” or “presidential harassment,” or a move that will help him win his 2020 reelection campaign.”

Zack Beauchamp: “The most compelling argument against impeachment, to my mind, was that it wouldn’t really accomplish anything.”

“There’s a virtual guarantee that impeachment will fail in the Republican-controlled Senate, which means there’s no real chance of actually removing Trump from office. Public opinion about the Russia scandal became more set along partisan lines as time went on, making it unlikely that drawing attention to it would galvanize public opinion against the Trump presidency in 2020. Why risk distracting Democrats from the issues on which Trump is genuinely unpopular, and jeopardizing the House Democratic majority, when the gains were so marginal?”

“This seems to be something like the reasoning that has guided Pelosi’s stolid opposition to impeachment. It’s not obviously correct, but it’s a serious argument — and one that pro-impeachment Democrats and commentators dismissed too easily.”

“The new Ukraine scandal challenges this logic. There is now an obvious and immediate pragmatic upside to impeachment: stopping an ongoing abuse of presidential power that could undermine the integrity of the 2020 election.”

“The U.K. Supreme Court has ruled that Boris Johnson’s advice to the Queen that parliament should be prorogued for five weeks at the height of the Brexit crisis was unlawful,” the Guardian reports.

New York Times publisher A.G. Sulzberger writes that the Trump administration had no intention of alerting or protecting a journalist in Egypt who was in potential danger.

“To give you a sense of what this retreat looks like on the ground, let me tell you a story I’ve never shared publicly before. Two years ago, we got a call from a United States government official warning us of the imminent arrest of a New York Times reporter based in Egypt named Declan Walsh. Though the news was alarming, the call was actually fairly standard. Over the years, we’ve received countless such warnings from American diplomats, military leaders and national security officials.”

“But this particular call took a surprising and distressing turn. We learned the official was passing along this warning without the knowledge or permission of the Trump administration. Rather than trying to stop the Egyptian government or assist the reporter, the official believed, the Trump administration intended to sit on the information and let the arrest be carried out. The official feared being punished for even alerting us to the danger.”

“Unable to count on our own government to prevent the arrest or help free Declan if he were imprisoned, we turned to his native country, Ireland, for help. Within an hour, Irish diplomats traveled to his house and safely escorted him to the airport before Egyptian forces could detain him.”

“President Trump told his acting chief of staff, Mick Mulvaney, to hold back almost $400 million in military aid for Ukraine at least a week before a phone call in which Trump is said to have pressured the Ukrainian president to investigate the son of former vice president Joe Biden,” the Washington Post reports.

“Officials at the Office of Management and Budget relayed Trump’s order to the State Department and the Pentagon during an interagency meeting in mid-July… They explained that the president had ‘concerns’ and wanted to analyze whether the money needed to be spent.” “Administration officials were instructed to tell lawmakers that the delays were part of an ‘interagency process’ but to give them no additional information — a pattern that continued for nearly two months, until the White House released the funds on the night of Sept. 11.”

“President Trump confirmed Tuesday that he withheld military aid from Ukraine, the Washington Post reports. He admitted it, so we don’t even need a trial.

Jonathan Bernstein: “Very early on, when the original cover-up was still intact and President Richard Nixon was cruising to a landslide re-election, House Majority Leader Tip O’Neill, as Fred Emery tells the story, ‘reckoned that so many bad things had been done by the Nixon men that they simply could not be kept secret indefinitely. Privately, he urged his surprised colleagues in the House leadership to ‘get ready for impeachment.’”

“But O’Neill was patient. The House didn’t move after the cover-up collapsed in spring 1973, or after dramatic Senate hearings that summer revealed that Nixon was personally involved. Only after the Saturday Night Massacre in October, when Nixon ordered Justice Department officials to fire the special prosecutor overseeing the probe, did they start moving toward impeachment. And then for months, the judiciary committee slowly gathered evidence to make its case. This strategy eventually worked, as the story gradually came out and moderate Republicans and conservative Democrats began defecting from Nixon – followed by the rest of the Republican Party in August 1974.”

“Has Pelosi been emulating O’Neill? She’s been taking plenty of heat from pro-impeachment Democrats. She’s certainly been unwilling to get ahead of her caucus. Perhaps that’s because she thinks impeachment could be avoided. Or perhaps she’s been betting that Trump’s past and current lawlessness would keep supplying new evidence pushing ambivalent Democrats toward action – and that a measured, patient process would be far stronger than a rushed one.”

“On Monday, Trump told reporters that his decision to withhold aid to Ukraine — a decision seemingly at the heart of a whistleblower complaint roiling Washington — was over his concerns to ensure that the country’s new government was doing everything possible to root out corruption. But asked a similar question on Tuesday, Trump’s talking point suddenly changed to his frustrations about European countries not spending enough on foreign aid.”

Fox News legal analyst Andrew Napolitano said on Fox News that if President Trump did what he’s said he did on the phone call with the president of Ukraine, that’s a crime.

Said Napolitano: “It is a crime for the present to solicit aid for his campaign from a foreign government.”

Michael Kruse: “That Trump would so quickly in the wake of the Mueller investigation commit a brazen act some critics say represents an egregious and impeachable abuse of power has mystified many observers. How could he have so blithely ignored the lessons of the nearly three-year investigation?”

“But those who know him best say this is merely the latest episode in a lifelong pattern of behavior for the congenitally combative Trump. He’s always been this way. He doesn’t stop to reflect. If he wins, he barely basks. If he loses, he doesn’t take the time to lie low or lick wounds; he invariably refuses to even admit that he lost. Regardless of the outcome—up, down or somewhere in between—when one tussle is done, Trump reflexively starts to scan the horizon in search of a new skirmish.”

“Do I think Trump is a horrible person? Yes; but that’s so beyond the point. As a Republican, I hate him because he’s making us lose when we should be crushing it. It’s his stupid personality. If you were slightly less terrible, we’d be winning.”

President Trump responded to an impassioned plea at the United Nations by teenage climate activist Greta Thunberg with a sarcastic late-night tweet. Said Trump: “She seems like a very happy young girl looking forward to a bright and wonderful future. So nice to see!” Trump attached video of Thunberg’s angry remarks to the gathering in New York: “People are suffering, people are dying, entire ecosystems are collapsing. We are in the beginning of a mass extinction, and all you can talk about is money and fairy tales of eternal economic growth.”

CNBC: “Television footage of Ross showed the wealthy businessman sleeping soundly as Trump talked about a possible trade deal with China — which is part of the Commerce chief’s portfolio — and the U.S.’s stance on Iran.”

“Ross had his eyes firmly closed for as long as 15 minutes, video suggested, as Vice President Mike Pence and Secretary of State Mike Pompeo gave the impression of listening intently to Trump.”

“A lawsuit brought by protesters who contend they were roughed up by security personnel outside Trump Tower in 2015 has become an urgent problem for President Trump’s legal team after a New York judge ruled Friday that Trump must submit to a videotaped deposition in the case,” Politico reports.