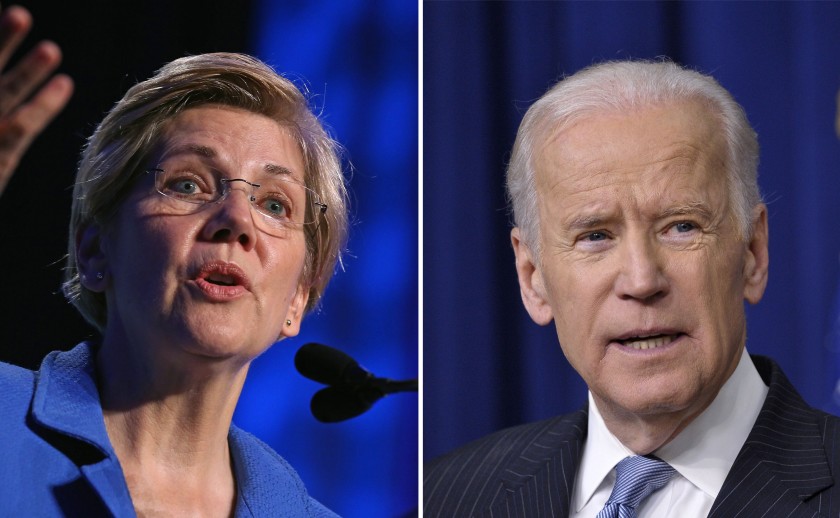 It was inevitable, the trend and momentum in this primary race has been on her side all summer. A new Quinnipiac poll finds Elizabeth Warren leading the Democratic presidential race with 27%, followed by Joe Biden at 25%, Bernie Sanders at 16%, Pete Buttigieg at 7% and Kamala Harris at 3%.

No other candidate tops 2%.

Said pollster Tim Malloy: “After trailing Biden by double digits since March in the race for the Democratic nomination, Warren catches Biden. We now have a race with two candidates at the top of the field, and they’re leaving the rest of the pack behind.”

A new Los Angeles Times poll in California finds Elizabeth Warren leading the Democratic presidential race with 29%, followed by Joe Biden at 22%, Bernie Sanders at 19%, Kamala Harris At 8%, Pete Buttigieg at 6% and Beto O’Rourke at 3%.

Said pollster Mark DiCamillo: “We appear to be at an inflection point in the Democratic presidential campaign. The changing voting preferences of California Democrats may be a harbinger of things to come elsewhere across the country.”

“Joe Biden’s poll numbers are crumbling in the early nominating states that matter most,” Politico reports.

“Once the dominant front-runner in the Democratic primary, Biden is now marginally trailing Elizabeth Warren in the first caucus state of Iowa and the first primary state of New Hampshire. His South Carolina firewall shows signs of cracking and he’s losing his once-overwhelming lead in Florida.”

Politico: “Most of Biden’s chief opponents are renewing their calls for Trump’s impeachment after the president allegedly pressured Ukrainian leaders to open an investigation into Biden and his son in exchange for hundreds of millions of dollars in U.S. military aid. They’ve blasted the president for ‘violating our constitutional mandates’ and denounced his appeals for the probe as a ‘political threat.’”

“But they’re facing growing calls from diverse voices in the party to do even more, including rallying around Biden in more forceful ways for the good of the country — and at possible expense to their own campaigns. Compounding the pressure is Biden’s position atop the field, and their need for him to fall in order for them to gain.

Jonathan Bernstein: “So far, President Donald Trump is unpopular – and, polls say, so is impeachment. I expect the latter to change. The more that highly visible Democrats are united in favor of impeachment, the more that Democratic voters and independents who dislike Trump will likely shift toward their position. I wouldn’t be surprised if that shift happens rapidly, at least if the news media gives saturation coverage to the story and voters start to learn more about it.”

“I think it’s a lot less likely that Trump’s popularity will change. Yes, President Richard Nixon’s approval ratings dropped dramatically over the course of the Watergate scandal. But there are a lot of differences, starting with the fact that Trump has a lot less ground to lose. It’s possible that new facts could push mild Trump supporters into being mild Trump opponents (and so on for other levels of support), but I wouldn’t count on a lot of that. What really could hurt Trump would be if numerous high-profile Republicans turned against him. That’s unlikely, because those Republicans know that the less popular Trump is, the worse off all party candidates will be in the next election. But if Trump’s approval ratings are going be harmed, that’s how it’ll happen.”

“Assuming Trump survives and becomes the Republican nominee next year, the effects of impeachment per se on the presidential election will probably be small and possibly nonexistent. We don’t know how long any impeachment and trial would last, but voters tend to have shockingly short memories.”

Roll Call: “Several House members in crucial swing districts rolled the dice this week by supporting an impeachment inquiry into President Trump, betting voters will eventually agree that such an inquiry is the best path forward.”

“The support from members whose victories helped flip the House from red to blue last year may have spurred Speaker Nancy Pelosi to apply the impeachment description Tuesday to ongoing investigations.”

“This ‘transcript’ itself is a smoking gun. If this is the version of events the president’s team thinks is most favorable, he is in very deep jeopardy. We need to see the full whistleblower complaint and the administration needs to follow the law. Now.”

“As the House on Tuesday launched a formal impeachment inquiry into President Trump, his reelection campaign immediately tried to turn the moment into an opportunity, bombarding his supporters with fundraising appeals,” the Washington Post reports.

“Such appeals — often capitalizing on newsworthy moments for the president — have been a mainstay of Trump’s fundraising strategy and have fueled his reelection effort.“

Kentucky Gov. Matt Bevin (R) “has shaken up his reelection campaign weeks ahead of the November vote, a potentially ominous sign for the Republican incumbent,” Politico reports.

“The shakeup comes as Bevin tries to survive a competitive reelection battle against state Attorney General Andy Beshear, the Democratic nominee. Public polling is limited, though past survey data has shown Bevin to be one of the most unpopular governors in the country.”