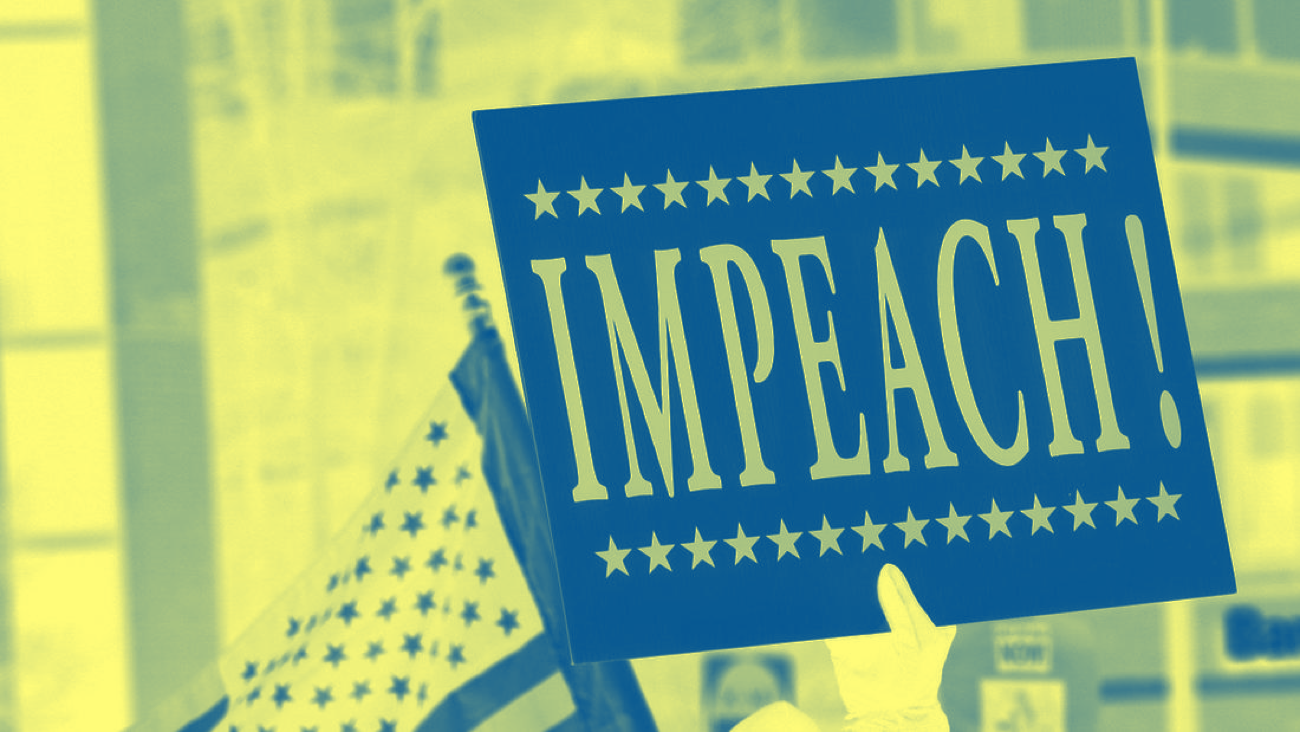 Playbook: “Unlike the Byzantine Russiagate allegations, the latest charge — that the president repeatedly tried to get a foreign leader seeking military aid to investigate a political opponent — is not hard to understand. It’s about the actions of Trump himself, not his aides or former campaign nobodies. At this point, the facts are pretty much in the open and agreed to: The president has practically admitted he discussed Biden with Ukraine’s president, and his lawyer Rudy Giuliani has been open about pressing the Ukrainians to investigate Biden’s son Hunter. Now it’s up to Congress to figure out how to proceed.”

“Speaker Nancy Pelosi understands the caucus’ moods better than anyone, and her letter Sunday — which said the president needs to hand over the whistleblower report now, or else — was a rifle shot that should not be underestimated.”

“Time is of the essence for the Trump White House. If they don’t produce the whistleblower report within days — maybe a week — Democrats are going to be under extreme pressure to move toward impeachment. Thursday will be an important day to watch: That’s when Joseph Maguire, the acting director of national intelligence, is testifying in an open hearing.”

David Leonhardt steps back to look at the full picture of Donald Trump’s presidency.

“Ukraine wants to stay out of a domestic political battle in Washington and any attempt by either side to take advantage of Ukraine would damage relations,” a top official in President Volodymyr Zelenskiy’s administration told Reuters.

“Ahead of a meeting with President Donald Trump this week, Zelenskiy is caught in a fight between Republicans and Democrats over allegations that Trump pressured Zelenskiy to investigate Democratic presidential hopeful Joe Biden.”

Daniel Drezner: “It is safe to assume that Trump will continue to abuse the powers of the presidency as long as he is in office. The Ukraine example shows that he is not above using presidential authority for partisan gain. Furthermore, when he is not doing those things, he is pursuing other policies that harm the U.S. economy and the national interest.”

“Would impeachment stop any of that? No, not directly. What it would do, however, is distract the heck out of him. To say that Trump can be easily distracted would be an understatement — his short attention span occupies a healthy portion of the #ToddlerinChief thread. Sharpiegate exemplified how Trump obsessed about a small thing so much that it became a more scandalous thing.”

“So why impeach Trump? Because he will obsess about it. The moment it becomes a live option, the moment a trial in the Senate seems conceivable, he will talk about nothing else. He will rant to his staff and bore foreign leaders about it. He loves a fight. And every moment Donald Trump thinks about impeachment is a moment he is not thinking about doing even more reckless things, like trying to compromise the independence of the Fed, or launching a larger trade war, or stumbling into a real war.”

“When Republicans cut corporate and individual taxes in 2017, they promised two things: It would grow the economy and it would not add to the national debt. Neither of those have borne out,” the Washington Post reports.

“Not only has economic growth slowed, in part because of President Trump’s ongoing trade war with China, but the deficit has grown to its highest level in seven years, in part due to reduced tax revenue.”

“To counter these trends, the Trump administration has engaged in economic double-talk, including repeatedly saying, falsely, that the federal deficit — and by extension, the national debt — was falling or would fall in the future.”

Jonathan Bernstein: “Many details remain unknown about the whistle-blower complaint that is now roiling Washington. But Trump himself has confirmed the core of the story: He pressured the new president of Ukraine to investigate former Vice President Joe Biden, or perhaps to just invent some dirt on him.”

“By all objective standards, this is a monster story. It’s a clear-cut case of not just an impeachable offense, but one that demands impeachment and removal. For a president to invite foreign interference in a U.S. election is a flat-out abuse of power. And that’s not even to mention the widespread suspicion that Trump held up military aid to Ukraine as an added inducement. Just what we know is more than enough; add it to all the other ways in which Trump has violated his oath of office (and see David Leonhardt’s tour de force summation), and it’s not a close call.”

“By all objective standards, that is. Politics, like it or not, isn’t in most cases about objective standards. Which is why on Monday the big test will be very simple: Will Americans light up the phones of their representatives in Congress to demand action? Or is this just more background noise for them – just fodder for partisans to yell about, but nothing more?”

Washington Post: “House Democrats are so frustrated with President Trump’s administration and his allies blocking their investigative efforts that some have seriously encouraged invoking a long-dormant power Congress has to jail or fine uncooperative witnesses.”

“Under inherent contempt, Congress could fine people who aren’t cooperating with them today. At the top of their list for any of these punishments might be the acting director of national intelligence, Joseph Maguire, who is withholding a whistleblower complaint about the president, or former Trump campaign manager Corey Lewandowski, who complied with a subpoena but mocked Congress once there.”

“Some House Democrats are talking about taking punishment into their own hands via inherent contempt because they’re frustrated with Democratic leadership for not more fully embracing their impeachment inquiry.”

MNUCHIN: Again, I’m not going to speculate on that. What I do find inappropriate is the fact that Vice President Biden at the time’s son did very significant business dealings in Ukraine. I, for one, find that to be concerning. And, to me, that is the issue perhaps that should be further investigated.

MNUCHIN: Again, I don’t — I don’t really want to go into more of these details, other than to say…

TAPPER: Well, you’re just setting a precedent that the president is violating.

“Unfortunately, special counsel Robert Mueller may have stymied any future DOJ’s ability to enforce that law when he gave Trump’s son Donald Trump Jr. a pass earlier this year on similar conduct. If Trump has again sought foreign assistance in an election, Mueller’s decision not to enforce the law last time around is partly to blame for the president acting with total impunity along with an accompanying decay of democratic norms.”

“Talk about pressuring a foreign country to interfere with and control a U.S. election. It couldn’t be clearer, and that’s not just undermining democratic institutions. That is treason. It’s treason, pure and simple, and the penalty for treason under the U.S. code is death. That’s the only penalty.” — Former Gov. William Weld (R), quoted by the Washington Post.

“This is all wrong. I shouldn’t be up here. I should be in school on the other side of the ocean. Yet you come to us young people for hope. How dare you. You have stolen my dreams and my childhood with your empty words.” — Teenage climate activist Greta Thunberg, speaking to the U.N. General Assembly.

Rudy Giuliani said he can’t be “100% certain” that President Trump did not threaten to withhold foreign aid when Trump reportedly urged Ukraine’s president to investigate the son of Joe Biden, CNBC reports.

Aaron Blake: “Trump makes no mention about the Bidens, but he’s essentially doing what Giuliani did Thursday: He’s laying a preemptive defense for if it comes out that Trump did offer Ukraine something or threatened (explicitly or implicitly) to withhold something — such as $250 million in aid, which Trump did withhold for a time — in exchange for Ukraine investigating the Bidens.”

President Trump claimed Monday that he deserves a Nobel Prize for “a lot of things” but complained that the committee that hands out the awards does so unfairly, the Washington Post reports.

Politico: “A growing number of freshman Democrats in swing districts are rethinking their stance against impeachment after President Donald Trump’s attempt to pressure Ukrainian officials for his own political gain — a shift that could put real pressure on Speaker Nancy Pelosi to act after months of resistance.” Said one freshman Democrat: “It’s a seismic change in mood.”

NBC News: “House Democrats have been pulling together a wide-ranging case to impeach President Trump on a series of alleged past and ongoing crimes against the country — a set of charges that goes far beyond the Mueller report — and all signs point to a possible public inflection point later this week, when acting Director of National Intelligence Joseph Maguire testifies before the House Intelligence Committee.” Said one senior House Democratic aide: “The dam could break on Thursday.”

“The panel’s chairman, Rep. Adam Schiff (D-CA) has been the most reluctant of Speaker Nancy Pelosi’s top lieutenants to move toward impeaching the president, but Democrats say Schiff is spitting hot vinegar over Maguire’s decision to withhold an intelligence community whistleblower’s complaint about Trump’s dealings with Ukraine at the insistence of the Justice Department.”

James Hohmann: “Trump seems to be daring House Democrats to impeach him, and they seem increasingly inclined to take up the challenge.”

“Competing factions inside the White House have stymied efforts to unite behind gun legislation, further delaying President Trump from getting behind any plan,” Politico reports.

“On one side is Ivanka Trump, the president’s daughter and adviser, and Attorney General William Barr. Both are urging the president to back new firearms restrictions — including expanded background checks for gun sales — insisting he can be the leader who succeeds on an intractable issue that has bedeviled his predecessors and that he can win back moderate suburban voters in the process, according to people involved in the discussions.”

“On the other side, a group that includes Donald Trump Jr., the president’s son and an avid hunter, and a top aide to acting White House chief of staff Mick Mulvaney, is telling Trump he risks losing support from his conservative base if he pushes too aggressively on new gun control legislation, they say.”

A Trump adviser was candid to CNN about the potential legal peril for President Trump asking Ukraine to investigate Joe Biden and his son: “This is a serious problem for us. He admitted doing it.” However, another source close to the White House said Trump’s team “is treating the Ukraine story like the President’s taxes: That is, a problem but one that can potentially be fought out in the media and in the courts, if needed.”

White House press secretary Stephanie Grisham said that she is not likely to conduct a White House press briefing any time in the near future, deriding the once-regular sessions as an act of “theater” for reporters seeking “to get famous” during the televised news conferences, Politico reports.