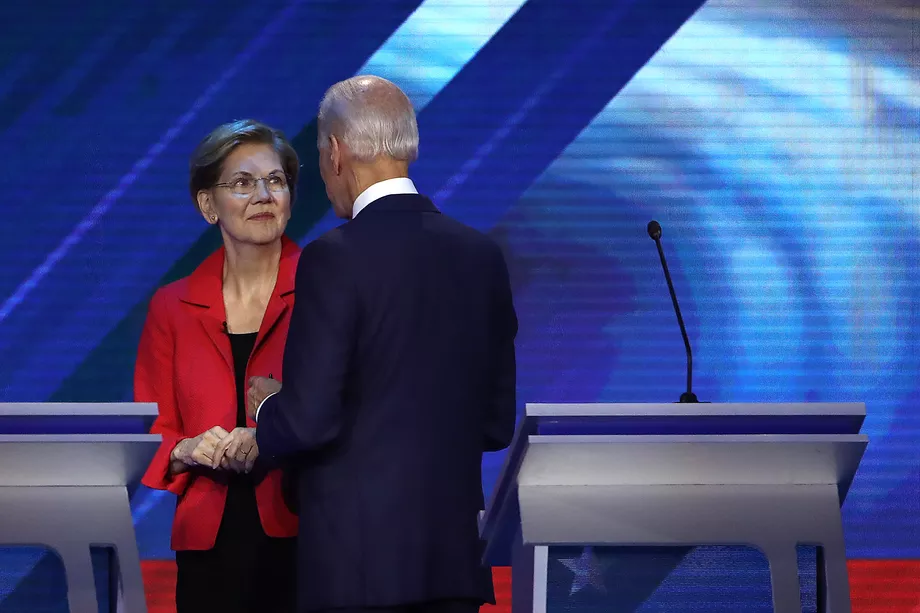 More important: “The percent who say they are ‘extremely interested’ in the election has reached 80%, the highest point in the history of our polling. That is what is actually most interesting about the finding. In all prior cycles, interest in politics drops sharply and grows over the election cycle, put political engagement has jumped 10 points since the mid-terms.”

“Virtually, every registered voter now meets our criteria as ‘likely,’ meaning this election will bring in millions of new voters.”

Meanwhile, Joe Biden continues to perform best of the Democratic candidates tested. He has the biggest lead over Trump, 52% to 38%. Bernie Sanders leads Trump, 48% to 40%, while Elizabeth Warren leads 46% to 40%.

In hypothetical general election match ups, President Trump is in a statistical dead heat against Warren, Biden and Sanders.

CALIFORNIA–A new KQED/Change Research poll in California finds Elizabeth Warren leading the Democratic field with 25%, followed by Bernie Sanders at 23%, Joe Biden at 18%, Kamala Harris at 11%, Pete Buttigieg at 10% and Andrew Yang at 3%.

“Pete Buttigieg on Thursday unveiled his plan to reform the U.S. healthcare system by offering everyone coverage under the federal Medicare program, but not forcing people to give up private heath insurance plans,” Reuters reports.

Vox: “The plan is more modest than what the most progressive candidates and voters support, which would be a single-payer system similar to Canada and Taiwan. But the Buttigieg plan is still ambitious and reflects the leftward shift of the Democratic mainstream: the more moderate candidates aren’t willing to scrap private coverage entirely, but they are still pushing for a much larger government role in providing health care to Americans.”

TEXAS–A new University of Texas at Tyler post debate poll finds Joe Biden leading the state with 28%, followed by Texan Beto O’Rourke at 19%, Sanders 17%, Warren 11%, Booker 6%, Harris 6%, Castro 4%, Buttigieg 4%, and the rest at or below 1%. Bennet/Bullock/Delaney/Yang/Steyer/Messam 1%.

McCarthy also suggested that adding some “beachfront property” to U.S. territory might be nice.

“Rep. Joseph Kennedy (D-MA), the last member of the Democratic dynasty serving in Washington, plans to formally announce Saturday that he is launching a primary challenge to Sen. Edward Markey (D-MA), an audacious political move that could open fissures within the Democratic Party and reshape the Massachusetts political landscape,” the Boston Globe reports.

CNN: “Back in the 2000 election, John McCain opened his campaign bus up to reporters, offering extreme access as he engaged with journalists in between stops. The bus was called the Straight Talk Express and became a symbol of McCain’s commitment to providing press access..”

“Nearly 20 years later, Pete Buttigieg is going to try out the concept. Beginning Saturday, Buttigieg will go on a four-day swing through Iowa in which reporters from national and local outlets will be welcomed on his bus. Everything will be on the record.”

“Kamala Harris is putting her stumbling campaign on the line with a new Iowa-or-bust strategy: She’s shifting away from the closed-door fundraisers that dominated her summer calendar to focus on retail politicking in the crucial kickoff state,” Politico reports.

“Harris huddled with top campaign officials Tuesday in Baltimore to discuss the next steps as a series of polls show her plummeting into the mid-single digits. She’s not expected to significantly alter her message. Instead, Harris is planning to make weekly visits to the state and nearly double the size of her 65-person ground operation.”

Kamala Harris’ campaign is setting up an early goal post, vowing to achieve a top-three finish in the Iowa caucuses, CBS News reports.

Said campaign manager Juan Rodriguez: “We want to make sure that we have a strong top-three finish. I think that will kind of continue to give us a slingshot to go into that early primary state calendar and then make sure that we’re also competitive heading into Super Tuesday.”

One million people have donated to Bernie Sanders’ presidential campaign, Politico reports. He is the first candidate to announce reaching that milestone.

“Senate Majority Leader Mitch McConnell came out Thursday in support of providing states with an additional $250 million in election security funding, an abrupt turnaround after more than a year of opposition by the Kentucky Republican on the issue,” the Washington Post reports.

Too little, too late and check the fine print and the details everyone. But I guess we should have called him Moscow Mitch sooner.

“A consistent but uneasy front-runner in Democrats’ 2020 presidential primary scramble, Joe Biden is flexing his muscle with new endorsements from three congressmen: two former chairmen of the Congressional Black Caucus and a former Florida governor,” the AP reports.

“The moves from Reps. G.K. Butterfield (D-NC), Emanuel Cleaver (D-MO) and Charlie Crist (D-FL) underscore Biden’s play both for the party establishment and minority voters who will be key in the early stages of the primary calendar, especially in South Carolina’s late February primary and the Southern states that follow in March.”

Freshman Rep. Lucy McBath (D-GA) ruled out a bid for U.S. Senate in Georgia, telling the Atlanta Journal-Constitution she’s focused on winning a second term in one of the country’s most competitive House districts.