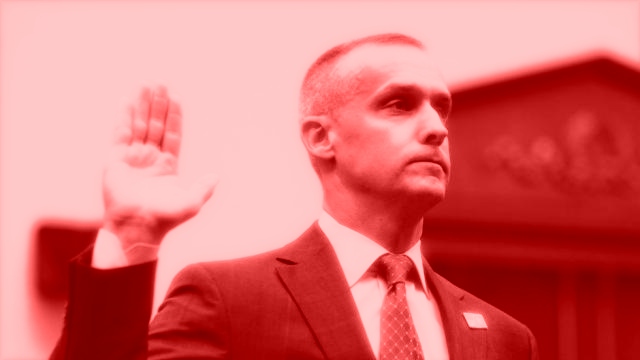 On Tuesday afternoon, former Trump adviser and probable New Hampshire Senate candidate Corey Lewandowski testified before the House Judiciary Committee. Congressional Democrats had called him in to ask him about obstruction of justice charges laid out in the Mueller report; Trump is alleged to have directed Lewandowski, who has never formally worked in the White House, to tell then–Attorney General Jeff Sessions to reverse his decision to recuse himself and to limit the investigation to Russian electoral interference. But Lewandowski, who has always been one of the more belligerent inhabitants of the Trump universe, was predictably uninterested in cooperating. The hearing very quickly devolved into a circus, one that, judging by his Twitter feed, President Trump enjoyed wholeheartedly. (Later, things settled down to the point that Lewandowski actually provided some useful information about his role in the Mueller investigation.)

What useful information, you ask?

The New York Times: “Mr. Lewandowski, under sharp questioning by Democrats on the House Judiciary Committee, confirmed that Mr. Trump had once asked him to help pressure Attorney General Jeff Sessions to curtail the scope of the Russia investigation, but said he did not believe he had been asked to do anything illegal. (Except that Obstruction of Justice is illegal).

After initially stonewalling Democrats’ questions, Mr. Lewandowski appeared to abruptly change strategies, confirming the details of a key episode from the Mueller investigation — and even providing new information that wasn’t in the special counsel’s report. Under questioning by Representative Hank Johnson, Democrat of Georgia, Mr. Lewandowski said he never relayed the message to Mr. Sessions because he went on a beach vacation with his children.

The episode, which occurred in June 2017, is one of several instances of possible obstruction of justice documented by the special counsel, Robert S. Mueller III.”

Politico: “Air Force officers who have earned medals for their tours of combat theaters can pick up some more brass with a short pitstop in Southwest Scotland. As part of its relationship with the Air Force, President Donald Trump’s Turnberry resort occasionally gifts high-ranking officers a version of its ‘Pride Pin,’ a lapel pin featuring the property’s iconic lighthouse — an honor reserved for VIPs — upon their arrival, according a resort staffer familiar with the practice. Rank-and-file members can expect a more basic welcome package in their rooms, featuring goodies like Scottish shortbread.”

“A five-day visit to Turnberry and the surrounding region revealed that the regular visits from Air Force crews on layovers from Prestwick Airport have become a major facet of the life of the resort. It also revealed that, rather than being restricted to single-night refueling stops, some visits last multiple nights, expanding the known dimensions of the relationship between the president’s luxury resort and the U.S. military.”

Jamelle Bouie: “Democrats are left in an unenviable position. Should they win a federal ‘trifecta’ — the White House, the Senate and the House of Representatives — they’ll still have to deal with a Trump-branded judiciary. It’s entirely possible that a future Democratic agenda would be circumscribed and unraveled by a Supreme Court whose slim conservative majority owes itself to minority government and constitutional hardball.”

“So what should Democrats do? They should play hardball back. Congress, according to the Judiciary Act of 1789, decides the number of judges. It’s been 150 years since it changed the size of the Supreme Court. I think it’s time to revisit the issue. Should Democrats win that trifecta, they should expand and yes, pack, the Supreme Court. Add two additional seats to account for the extraordinary circumstances surrounding the Gorsuch and Kavanaugh nominations. Likewise, expand and pack the entire federal judiciary to neutralize Trump and McConnell’s attempt to cement Republican ideological preferences into the constitutional order.”

CNN: “President Trump spoke for 95 minutes at a campaign rally in New Mexico on Monday night, among the longest speeches he’s given as President. We’re still working through the long transcript, but we know he made at least 26 false claims, most of them ones he’s often repeated over the past several months.”

Bill Gates told Bloomberg that he “wouldn’t be against a wealth tax” like the one Sen. Elizabeth Warren (D-MA) is proposing, but he didn’t think it was realistic.

Said Gates: “I doubt, you know, the U.S. will do a wealth tax, but I wouldn’t be against it. The closest thing we have to it is the estate tax. And I’ve been a huge proponent that that should go back to the level of 55 percent that it was a few decades ago.”

“In less than three years, President Trump has named more former lobbyists to Cabinet-level posts than his most recent predecessors did in eight, putting a substantial amount of oversight in the hands of people with ties to the industries they’re regulating,” the AP reports.

“The Cabinet choices are another sign that Trump’s populist pledge to ‘drain the swamp’ is a catchy campaign slogan but not a serious attempt to change the way Washington works.”

“Who do you like more, the country or the Hispanics? He says the country, I don’t know. I may have to go with the Hispanics to be honest with you. we’ve got a lot of Hispanics.” — President Trump, quoted by The Week, at a rally in New Mexico last night.

It never occurs to the Racist in Chief that the Country and Hispanics are one and the same, or are not mutually exclusive. Mr. Trump, guess what, the United States of America has more Spanish speaking citizens (57 million) than Spain (47 million). The United States is an Hispanic country.

“The Trump administration is expected on Wednesday to formally revoke California’s legal authority to set tailpipe pollution rules that are stricter than federal rules, in a move designed by the White House to strike twin blows against both the liberal-leaning state that President Trump has long antagonized and the environmental legacy of President Barack Obama,” the New York Times reports.

“The announcement that the White House will revoke one of California’s signature environmental policies will come while Mr. Trump is traveling in the state, where he is scheduled to attend fund-raisers in Los Angeles and Silicon Valley.”

ABC News journalist and political commentator Cokie Roberts has died at the age of 75, ABC News reports. “Roberts won countless awards, including three Emmys, throughout her decades-long career. She has been inducted into the Broadcasting and Cable Hall of Fame and was cited by the American Women in Radio and Television as one of the 50 greatest women in the history of broadcasting.”

“I never met her. She never treated me nicely. But I would like to wish her family well. She was a professional, and I respect professionals.” —President Trump, quoted by the Washington Post, on the death of journalist Cokie Roberts. Everything always always always has to be about him.

Katrina vanden Heuvel: “Democrats can no longer take their ‘blue wall’ in the upper Midwest for granted; that much is clear. But winning back the states that Trump turned red should not come at the expense of the party’s efforts to expand the electoral map, compete for new voters and build a more diverse coalition nationally. If it does, Democrats are likely to regret it even if they pull off a victory in the presidential race.”

“Narrowing the playing field to a few swing states could severely undermine Democrats’ efforts to win back the Senate. The potential success of the next president’s domestic agenda depends on control of the upper chamber, where Republicans currently hold 53 seats. With legitimate pickup opportunities in Arizona, North Carolina and Georgia (where two seats are up for grabs), Democrats need to energize voters in places that are widely considered less winnable and therefore less important to the outcome of the presidential race than the Rust Belt. Fiercely competing for those states’ electoral votes could help generate the enthusiasm Democrats need to swing the Senate and advance progressive goals.”

“The White House is seeking to end the United Auto Workers strike against General Motors with an agreement that would reopen an assembly plant in Lordstown, Ohio that GM shut down in March,” Politicoreports.

“The effort would effectively put the White House on the side of the UAW and could boost the president’s reelection chances next year in Michigan and Ohio. Some 48,000 GM workers went out on strike Monday demanding higher wages, more generous health care benefits and more job security than management has been willing to offer in a new contract.”

“The bulldozers and excavators rushing to install President Trump’s border fence could damage or destroy up to 22 archaeological sites within Arizona’s Organ Pipe Cactus National Monument in coming months,” according to an internal National Park Service report obtained by the Washington Post.

Former White House press secretary and current “Dancing with the Stars” contestant Sean Spicer on Tuesday implored viewers to vote for him to “send a message to Hollywood that those of us who stand for Christ won’t be discounted,” The Hill reports.

“House Democrats, amid a backlash from moderates, are backing away from a plan to block President Trump from extending new farm bailout funds,” the Washington Post reports.

“The shift comes days after Democrats had sought to prevent the White House from expanding a major component of their farm bailout plan, which the White House has estimated could cost close to $30 billion. Trump had authorized the bailout funds in response to an outcry from farmers who claimed they were caught in the middle of his trade war with China. Democrats are likely to include legislation that would expedite payment of these funds as part of a must-pass spending bill as soon as this week.”

Washington Post: “Trump’s dual approach on Iran is premised on the idea that by walking out of the 2015 international nuclear deal with Tehran and replacing the pact’s concessions with new sanctions, Trump can both please the hawks and force Iran to the bargaining table for a deal that would carry the Trump brand.”

“Trump would be the first U.S. president to meet an Iranian president since the 1970s, an idea that appeals to him, said advisers who spoke on the condition of anonymity to describe the president’s views. He has made an offer that has no precedent since the Islamic republic was born out of a bitterly anti-American revolution in 1979, saying repeatedly that he would sit down with ‘no conditions.’”