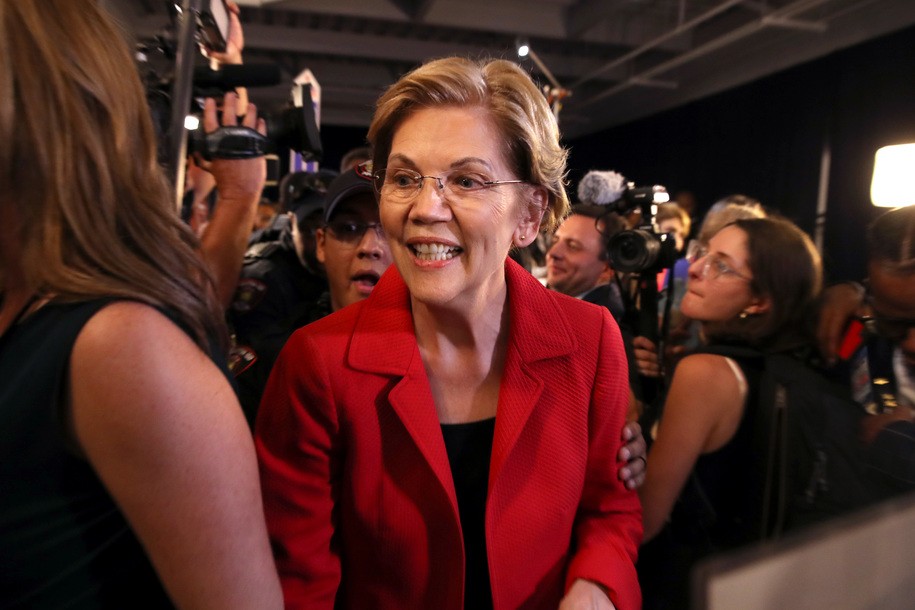 A new Economist-YouGov poll finds Joe Biden leading the Democratic primary field with 25%, followed by Elizabeth Warren at 19% and Bernie Sanders at 15%. No other candidate gets double-digit support. Pete Buttigieg is next with 8%, followed by Kamala Harris at 5%.

Shockingly, the Economist-YouGov Poll also tested the Republican primary, and finds President Trump with the support of 86% of Republican primary or caucus voters, followed by William Weld at 5%, Mark Sanford at 2% and Joe Walsh at 1%. The poll also found that 85% of Republican respondents viewed Trump favorably while just 12% viewed him unfavorably.

Key takeaway: “Almost a third (31%) of those surveyed said they do not want Biden to win the nomination, followed by Sanders (23%) and Williamson (12%).”

Another Iowa poll out today, from Focus on Rural America, finds Joe Biden barely ahead of Elizabeth Warren, 25% to 23%, followed by Pete Buttigieg at 12%, Bernie Sanders at 9%, Amy Klobuchar at 8% and Kamala Harris at 5%.

TRUMP APPROVAL IN NEVADA–A new ALG Research poll in Nevada finds President Trump’s approval numbers are abysmal in the state, 43% to 57%, with 49% of the electorate rating him as “highly unfavorable.”

Key takeaway: “The president’s numbers here should scare every Republican on the ballot next year.”

“The previously unpublished findings reveal why some Republicans are deeply concerned that a Kobach candidacy could cost the party a Senate seat in Kansas—and why Senate Majority Leader Mitch McConnell has been pushing so hard for Secretary of State Mike Pompeo, a former congressman from Wichita, to challenge Mr. Kobach for the GOP nomination.”

Politico: “Some of Sanders’ fiercest supporters are sounding the alarm that the campaign is bogged down by disorganization, personality clashes and poor communication between state operations and national headquarters. After a pair of setbacks this week — the acrimonious shakeup of his staff in New Hampshire on Sunday and loss of the Working Families Party’s endorsement to Warren a day later — Sanders’ allies and former aides are worried that recent disappointments are not one-off stumbles but rather emblematic of larger problems in his bid for the White House.”

“The concerns are particularly acute in New Hampshire. … Since Sunday, campaign staffers have been calling members of their steering committee, asking them not to speak to the media.”

Georgia Gov. Brian Kemp (R) formally started the process to select a successor to Sen. Johnny Isakson (R-GA) by launching a website that potential applicants must use to apply for the job, the Atlanta Journal Constitution reports.

Sen. Elizabeth Warren (D-MA) told MSNBC that she was not referring to Joe Biden in her speech on corruption in New York City earlier this week: “No. It’s talking about whether we’re going to turn backwards and just say the only problem is Trump. If we get rid of Trump, everything will be just fine.”

She added: “The way I see it, things have been broken for a very long time, for decades now.”

First Read: “Maybe most important of all, the NBC/WSJ poll shows that both Biden and Warren have potentially winning coalitions.”

“Biden enjoys significant advantages with African Americans, older Dem primary voters (those traditionally most likely to show up), and moderates and conservatives.”

“Warren, on the other hand, has the strong edge with liberal Democrats, women with college degrees and those who want large-scale change.”

“Bottom line: You can make the case that either is the frontrunner – right now – to win the Dem nomination.”

“Senior Republicans in Congress are expecting turmoil inside the National Rifle Association to sharply curtail the group’s participation in the 2020 campaign, conceding that they have lost confidence in the premiere gun rights organization,” the Washington Examiner reports.

Fifty-eight U.S. mayors announced their endorsements of Pete Buttigieg in a USA Today op-ed, giving the South Bend, Indiana mayor a boost of institutional support for his presidential campaign.

Politico: “Although the mayors are largely white, Buttigieg picked up some key endorsements from mayors of color, a constituency of voters with whom Buttigieg has struggled to make headway, notably including in the key-primary state of South Carolina.”

“Demographic shifts, progressive organizing efforts and President Trump’s potential weakness in the state appear to be providing Democrats in 2020 with their best shot at capturing the state since Bill Clinton won it more than two decades ago,” Politico reports.

“That poll follows several other recent surveys with more bad news for Republicans. A late July survey — conducted by Trump’s own pollster — showed the president losing to Biden, and another in August reported a tie. In Arizona’s closely-watched 2020 U.S. Senate race, two of those polls show GOP Sen. Martha McSally in a tie and a third shows her trailing Democrat Mark Kelly.”

“Weeks shy of his 95th birthday, former President Jimmy Carter said Tuesday he doesn’t believe he could have managed the most powerful office in the world at 80 years old,” the AP reports.

“Carter, who earlier this year became the longest-lived chief executive in American history, didn’t tie his comments to any of his fellow Democrats running for president, but two leading 2020 candidates, Joe Biden and Bernie Sanders, would turn 80 during their terms if elected.”