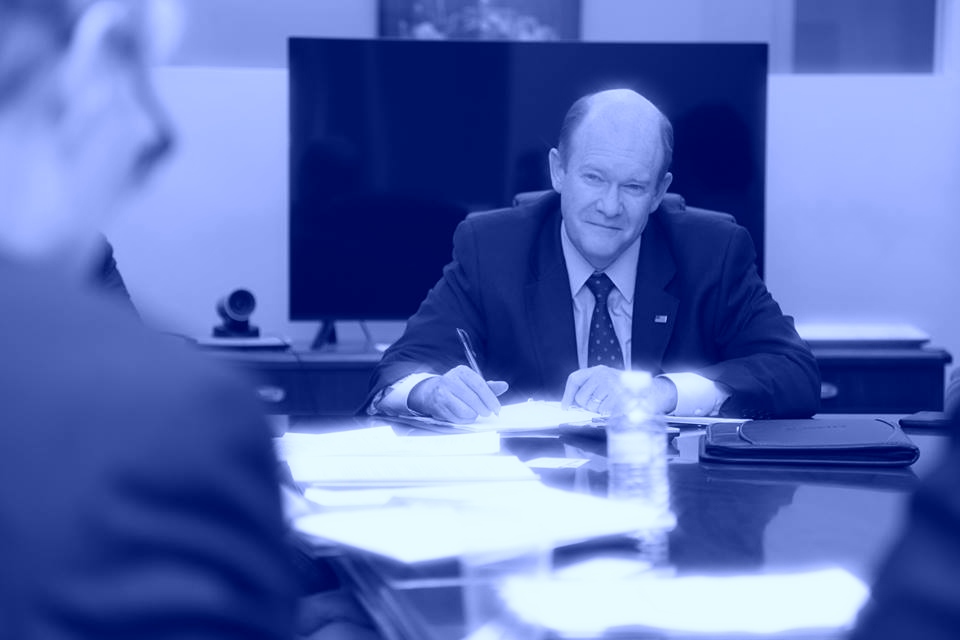 … for his support among Democrats in a potential upcoming primary in 2020. Not all publicity is good publicity if it makes your base unhappy.

First, Chris Coons is positioning himself to be the next Joe Lieberman on Iran. From the Week:

Coons, appearing Monday on Fox & Friends [ed note: that is his first mistake], told host Brian Kilmeade that if intelligence supports claims that Tehran, rather than Yemen’s Houthi rebels, were behind the strikes, “this may well be the thing that calls for military action against Iran.” […] The senator acknowledged that the U.S.’s relationship with the Saudis “has been badly strained” by the murder of journalist Jamal Khashoggi, but added that “Iran is really pushing our resolve.” If Tehran attacks American allies in the Middle East, such as Saudi Arabia, Jordan, and Israel, Coons said, “we need to take seriously taking action against them.”

That prompted a compliment from Kilmeade, who seemed inspired by the fact that a military operation against Iran could unite Democrats and Republicans — if the evidence supports the accusations, that is.

There is no surer way for Coons to not only draw a primary challenge but also lose that primary than for him to be Trump’s Democrat on Iran, cheerleading for war. If Saudi Arabia wants to attack Iran in response to whatever happened at the refinery, let them. America does not need to be involved. We are an oil exporter, we don’t need imports from Saudi Arabia to survive.

Second, it has been reported that Coons wrote to the FBI last fall to alert them to the new allegation against Kavanaugh that surfaced in the New York Times article over the weekend. But the FBI never followed up. My question for the Senator, why didn’t he go public with the new allegation? Was he too worried about offending his friend Jeff Flake and Lindsay Graham?

Finally, after the Democratic Primary debate last week, after Beto O’Rourke’s passionate statement against assault-style weapons and for a mandatory buyback program, Coons went on CNN and said “I frankly think that that clip will be played for years at 2nd Amendment rallies with organizations that try to scare people by saying, Democrats are coming for your guns. I don’t think having our presidential candidates like Congressman O’Rourke did, say that we’re going to try to take people’s guns against their will is a wise political move.”

Coons is now the male Claire McCaskill, a moderate afraid to stand for anything, always making concessions to Republicans and the gun nut right before negotiations even start. Candidates like O’Rourke on guns and Bernie Sanders and Elizabeth Warren on healthcare and economics help moderates, not hurt them. They move the Overton Window into a more proper balance between left and right, giving them more room to maneuver in negotiations. If you are going to start off any negotiation in the center, then the compromise is going to be between the center and right, not between left and right.

So that’s an appalling trifecta for Coons over the last week. Pissing off liberals and Democrats on Iran, guns, and Kavanaugh.

8 comments on “Chris Coons has been all over the news recently, and that’s not good”