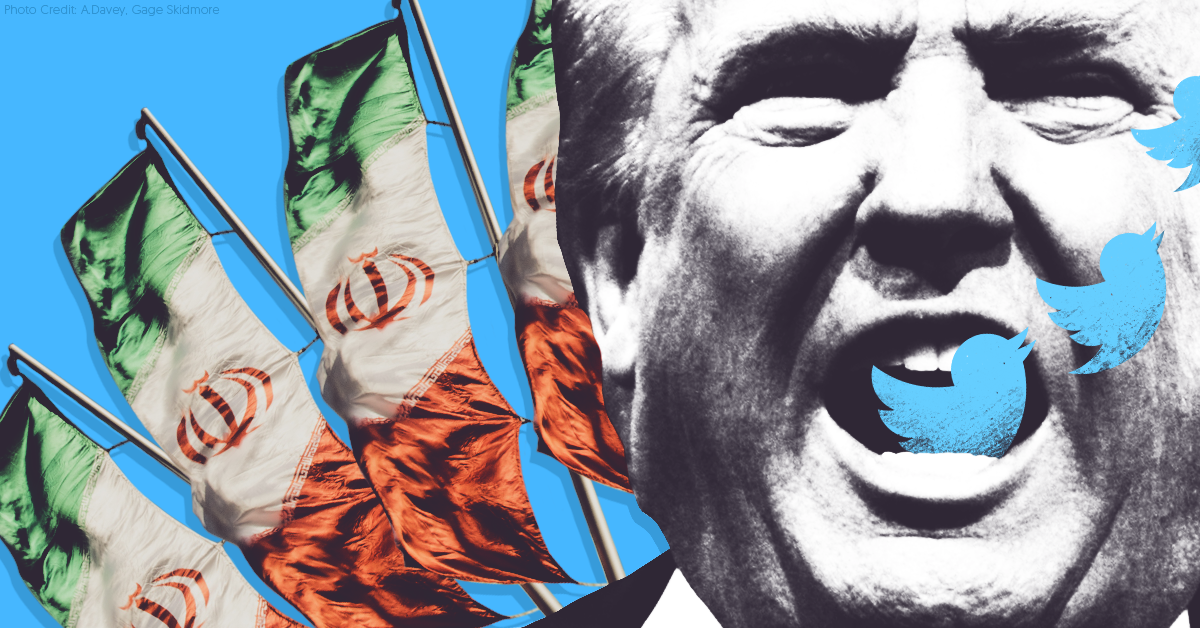 NBC News: “American intelligence indicates that the attack on a major Saudi oil facility originated from Iran, three people familiar with the intelligence told NBC News — an assessment that is likely to escalate tensions between Washington and Tehran. […] Three U.S. officials said there was extremely compelling evidence showing the origination point of the strikes, and one official with direct knowledge described that evidence as imagery.

President Trump tweeted that the U.S. has “reason to believe that we know” who is responsible for an attack on a Saudi Arabian oil field and the country is “locked and loaded depending on verification” following the crippling strike, CNN reports.

Said Trump: “Saudi Arabia oil supply was attacked. There is reason to believe that we know the culprit, are locked and loaded depending on verification, but are waiting to hear from the Kingdom as to who they believe was the cause of this attack, and under what terms we would proceed!”

“The subpoena opens a new front in a wide-ranging effort to obtain copies of the president’s tax returns, which Mr. Trump initially said he would make public during the 2016 campaign but has since refused to disclose.”

“The House Oversight and Reform Committee asked Transportation Secretary Elaine Chao on Monday to turn over documents related to communication with her family’s shipping company as the panel stepped up an investigation into whether any actions taken by Ms. Chao amount to a conflict of interest,” the New York Times reports.

“The request by the committee in the Democratic-controlled House relates to actions Ms. Chao has taken that potentially benefited Foremost Group, a New York-based shipping company owned by her family. Foremost has received hundreds of millions of dollars in loan commitments from a bank run by the Chinese government to help build ships that Foremost has purchased from government-owned shipyards there.”

House Judiciary Chair Jerry Nadler (D-NY) seemed to waffle on whether to move full-speed ahead on impeachment, telling the New York Daily News: “If you’re going to impeach the president, you want more than Democrats and progressives to understand what you’re doing.”

He added: “You have to have enough public support so that you’re not tearing the country apart, so that you don’t have half the country saying for the next 30 years, ‘We won the election — you stole it from us.’”

“Frankly, we are concentrating our resources on determining whether to impeach the president. Personally, I think the president ought to be impeached, but we have to concentrate on that for the next few months.” — House Judiciary Chairman Jerry Nadler (D-NY), on WNYC.

BuzzFeed News: “The story got its latest outing at last month’s summit in Biarritz, France, as the world leaders were gathered around the table for the formal meeting. When the discussion turned to North Korea … Trump went off on a tangent, spending some 10 minutes rambling about his great relationship with Kim, leaving the other G7 leaders mostly speechless.”

“The story goes like this: When Trump first met Kim, in Singapore in June last year, the two men talked about the tweets that Trump had posted in 2017, nicknaming the North Korean leader ‘Little Rocket Man.’ In Trump’s retelling, during a back and forth exchange about the name calling the two men had engaged in over many months before the meeting in Singapore — ‘You called me fat… and then you called me this…,’ — Kim asks Trump why he’d called him that.”

“‘Don’t you know Elton John? It’s a great song,’ the president, who is a big fan of the British musician, says. To which Kim responds, ‘But you called me “little.”’ Then comes Trump’s punchline: ‘That’s what he didn’t like!’”

“Acting director of national intelligence Joseph Maguire has until Tuesday to turn over a whistleblower complaint regarding a ‘serious or flagrant’ abuse involving an intelligence activity and possibly the White House,” the Washington Post reports.

“If he fails to do so, he will be ordered by House Intelligence Committee Chairman Adam B. Schiff (D-CA) to explain publicly on Thursday his reasons for refusing.”

The Alabama National Weather Service employee who tweeted that the state was not in the path of Hurricane Dorian was not aware of President Trump’s tweet that the state would be hit, the New York Times reports.

“It was incoming phone calls from Alabamians energized about Hurricane Dorian, suddenly confused and worried about whether they were in the path of the giant Caribbean storm. At one point, the few people on duty were all answering calls at the same time.”

“In response to the alarm, one employee dashed off a short message to the office’s 50,000 Twitter followers that reaffirmed what the latest models were saying: Alabama had little to worry about.”

The New York Times added a correction to a report over the weekend accusing Supreme Court Justice Brett Kavanaugh of sexual misconduct. The correction notes the woman allegedly involved in the incident with Kavanaugh does not recall it.

Still not mentioned by the newspaper: One of the authors of the article, and a related book, Robin Pogrebin, was a classmate of Kavanaugh’s at Yale.

“Speaker Nancy Pelosi will escalate her caucus’ anti-Mitch McConnell messaging this fall, testing a theory that this can be more effective than just continuing the party’s anti-Trump rhetoric,” Axios reports.

“Democrats are still divided over how much to focus on President Trump ahead of the 2020 elections — and they’re aware that “Trump fatigue” could mean that their attacks will bring diminishing returns.”

“Pelosi has relentlessly reminded her House colleagues that Democrats regained the majority in 2018 by focusing on the issues, not by bashing Trump.”

“Senior Democrats are moving quickly to snuff out calls to impeach Brett Kavanaugh, arguing those tactics are unrealistic and politically harmful,” Politico reports.

“Democrats are already wrestling with whether to try to oust President Donald Trump, and leadership sees little room for the party to take on a second divisive impeachment saga barely a year before the presidential election. So the demands by 2020 presidential contenders to remove the Supreme Court justice, on the heels of new reporting about allegations of sexual misconduct, are getting panned.”

“As Justice Brett Kavanaugh prepares for his second year on the Supreme Court, new reporting has detailed how the limits ordered by the White House and Senate Republicans last year constrained the FBI investigation into allegations of sexual misconduct when he was a college freshman,” the Los Angeles Times reports.

“The FBI was informed of allegations that Kavanaugh, while drunk during his freshman year at Yale, exposed himself to two heavily intoxicated female classmates on separate occasions. The bureau did not interview more than a dozen people who said they could provide information about the incidents.”

“One of the accounts, reported by Deborah Ramirez, was made public at the time of Kavanaugh’s confirmation hearings. The other, not publicly known until this weekend, was reported by a male classmate who said he witnessed the incident. He unsuccessfully sought to get the FBI to investigate with help from a member of the Senate Judiciary Committee who asked FBI Director Christopher Wray to look into the allegation.”

“More than 49,000 members of the United Auto Workers walked off General Motors factory floors or set up picket lines early Monday as contract talks with the company deteriorated into a strike,” the AP reports.

“Workers shut down 33 manufacturing plants in nine states across the U.S., as well as 22 parts distribution warehouses. It wasn’t clear how long the walkout would last, with the union saying GM has budged little in months of talks while GM said it made substantial offers including higher wages and factory investments.”

“President Trump lashed out Sunday night at the news media for reporting that he would meet with Iranian leaders with ‘no conditions’ — something Trump has said on camera at least twice and that senior administration officials repeated to reporters just last week,” the Washington Post reports.

“Israeli Prime Minister Benjamin Netanyahu vowed Monday to annex ‘all the settlements’ in the West Bank, including an enclave deep in the heart of the largest Palestinian city, in a last-ditch move that appeared aimed at shoring up nationalist support the day before a do-over election,” the APreports.

“Locked in a razor tight race and with legal woes hanging over him, Netanyahu is fighting for his political survival. In the final weeks of his campaign he has been doling out hard-line promises meant to draw more voters to his Likud party and re-elect him in Tuesday’s unprecedented repeat vote.”

“Democratic leaders Nancy Pelosi and Chuck Schumer warned President Donald Trump on Sunday that any firearm legislation that falls short of universal background checks for gun sales ‘will not get the job done,’ complicating delicate negotiations between the president and a group of senators,” Politico reports.

“Trump has been discussing potential legislation with senators in both parties that would expand background checks but would not go as far as House-passed legislation that would apply them to all gun sales with limited exceptions. Trump issued a veto threat on the House’s background-checks bill earlier this year, and few Republicans in Congress support it.”

“But in a conversation with Trump on Sunday morning, the House speaker and Senate minority leader indicated to Trump that they were taking a much harder line than rank-and-file senators involved in the talks.”

“Following his acrimonious departure from the White House, former National Security Adviser John Bolton has insisted that he will have his ‘say in due course,’” the Daily Beast reports.

“It hasn’t yet been a full week, but it appears he’s found a vehicle for clearing the air. According to two people with knowledge of the situation, Bolton has already expressed interest in writing a book on his time in the Trump administration, and has been in contact in recent days with literary agents interested in making that happen.”

Said one source: “He has a lot to dish.”