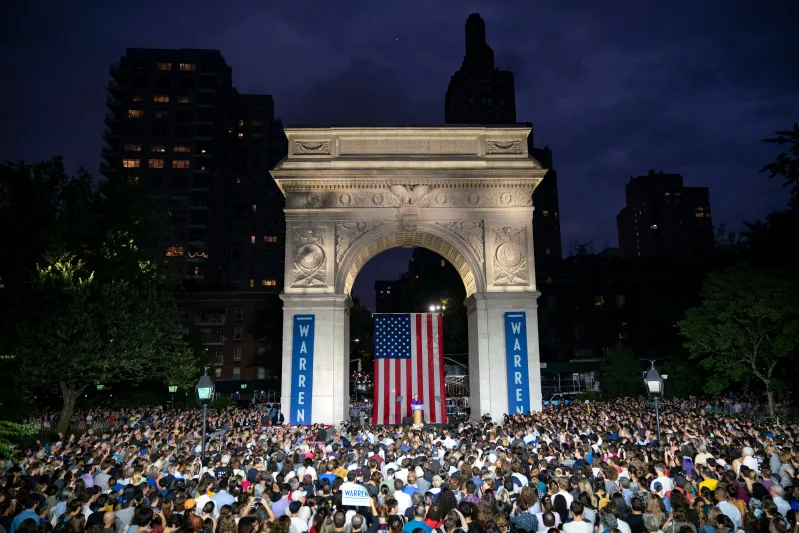 A new Wall Street Journal/NBC News poll finds Joe Biden leading the Democratic presidential field with 31%, followed by Elizabeth Warren at 25%, Bernie Sanders at 14%, Pete Buttigieg at 7%, Kamala Harris at 5%, Andrew Yang at 4%, Cory Booker at 2%, Amy Klobuchar at 2% and Beto O’Rourke at 1%.

Key takeaway: “Biden and Warren were the only candidates whose support grew meaningfully since a July survey. But measures of voter enthusiasm for Warren have risen during the year while declining for Biden.”

“Some 70% of Democratic primary voters rated themselves as enthusiastic about or comfortable with Warren, compared with 64% who said so of Biden.”

A new Siena poll in New York shows Joe Biden leading the Democratic presidential field with 22%, followed by Elizabeth Warren at 17% and Bernie Sanders at 15%. They are followed by Kamala Harris at 4% and Pete Buttigieg at 3%. No other candidate tops 1%.

A new Emerson poll in California shows a three-way race for the Democratic presidential nomination with Joe Biden and Bernie Sanders tied at 26%, followed closely by Elizabeth Warren at 20%. A significant drop is seen between this tier and the next group of candidates; Andrew Yang is in fourth at 7%, followed by Sen. Kamala Harris at 6%, former Rep. Beto O’Rourke at 5% and Mayor Pete Buttigieg at 4%. Every other candidate is at 2% or less.

“Israelis vote Tuesday in an unprecedented repeat election that will decide whether longtime Prime Minister Benjamin Netanyahu stays in power despite a looming indictment on corruption charges,” the APreports.

“Netanyahu, the longest serving leader in Israeli history, is seeking a fourth consecutive term in office, and fifth overall. But he faces a stiff challenge from retired military chief Benny Gantz, whose centrist Blue and White party is running even with Netanyahu’s Likud. Both parties could struggle to form a majority coalition with smaller allies, though, forcing them into a potential unity government.”

Prime Minister Benjamin Netanyahu’s Likud party trails the Blue and White party in 2 of 3 exit polls released as polls closed in Israel today, and the two are tied in the third poll, Axios reports.

All 3 polls show his right-wing bloc falling short of the 61 seats needed for a majority.

“Elizabeth Warren cemented a fight against corruption as the argument underpinning her presidential campaign, telling thousands gathered in this liberal bastion that ‘giant corporations have bought off our government,’” the Wall Street Journal reports.

“Earlier on Monday, Ms. Warren released an anticorruption proposal on the blog site Medium that built on legislation she announced last year. It adds new lobbying restrictions including a federal ban on all fundraising activities hosted by lobbyists. But the evening speech at Washington Square Park in Manhattan, the splashiest event of Ms. Warren’s presidential campaign, gave her a prominent forum to emphasize anticorruption policies.”

BuzzFeed News: “At the marble arches that stand atop this lower Manhattan landmark, a crowd of an estimated 20,000 people on Monday night wielded signs about ‘big structural change.’ Introductory speakers told the crowd that Democrats didn’t just need the energy of a ‘blue wave’ — but ‘a plan.’”

“And Warren, invoking the story of the nearby factory fire that set off a wave of feminist activism in 1911 and helped lead to the New Deal, outlined a theory of change that combines movement-driven pressure ‘from the outside’ with the tactical power of a leader working the system ‘from the inside.’”

“With each big rally, Warren is solidifying her place in an exclusive club of presidential candidates who have become crowd magnets, exhilarating fans at events that can sometimes feel like rock concerts.”

Politico: “The Colorado Democrat didn’t appear on the primary debate stage last week, after failing to reach the criteria set by the Democratic National Committee. But Bennet is doubling down on his commitment to Iowa with a seven-figure TV and digital ad push over the next several weeks, starting Tuesday.”

Rep. Alexandria Ocasio-Cortez (D-NY) plans on Tuesday to announce her endorsement of Marie Newman (D), a progressive candidate seeking to oust Rep. Daniel Lipinski (D-IL), a conservative-leaning Illinois Democrat, marking her first move of the 2020 campaign cycle to back a primary challenger to an incumbent, the New York Times reports.

A new University of Texas study quantifies just how often the Electoral College will produce an “inversion” — “that is, an election where one candidate wins the popular vote but the other walks away with the presidency. The numbers are simply astonishing,” Vox reports.

“In modern elections where one party prevails by just 2 points in the two-party popular vote, ‘inversions are expected in more than 30% of elections.’ That number rises to 40 percent in elections with a 1 percentage-point margin.”

“Republicans, moreover, are far more likely to benefit from an inversion than Democrats.” From the study: “In the modern period, Republicans should be expected to win 65% of Presidential contests in which they narrowly lose the popular vote.”

New York Times: “The two back-to-back addresses laid out the competing versions of populism that could come to define the presidential campaign. From the right, there is the strain Mr. Trump brought to maturity in 2016, combining the longstanding grievances of the white working class with a newer, darker angst about immigration and cultural change. And on the left, there is a vastly different populist wave still gaining strength, defined in economic terms by Ms. Warren, Democrat of Massachusetts, and Senator Bernie Sanders of Vermont.”

“The messages underlined the possibility that the 2020 election could be the first in a generation to be fought without an ally of either party’s centrist establishment on the ballot. While it is by no means certain that Ms. Warren will emerge as the Democratic nominee, two of her party’s top three candidates — Ms. Warren and Mr. Sanders — are trumpeting themes of economic inequality and promises of sweeping political and social reform.”

First Read: “By the way, while Warren, Joe Biden and Bernie Sanders all hit the campaign trail right after debate night in Houston, voters won’t see Kamala Harris at a public event until this Thursday in Iowa.”

“The last time Harris held a public event was Sept. 7 in New Hampshire, where she attended the VoteVets forum ahead of the state convention — so that’ll be 12 days off the trail for her when it comes to public events. Instead, Harris is spending the week on a fundraising swing through the east coast, holding events in New York, Connecticut and Baltimore.”

“As the third quarter fundraising deadline approaches on Sept. 30, Harris faces pressure to haul in big numbers, especially after bringing in just $12 million in the last quarter.”

“Three years ago, an uproar among company employees forced the chief executive of Intel Corp. at the time to cancel an event for candidate Donald Trump at his Atherton, Calif., home hours after the plan became public. On Tuesday, the president is set to return to the Bay Area for the first time since his election—and no one will say who is hosting him,” the Wall Street Journal reports.

“Campaign aides and advisers cited security and privacy concerns and noted violence that arose from protests during Mr. Trump’s previous trips to the area as they declined through Monday evening to disclose the host of the fundraiser the president will attend.”

“Donors invited to the event—whose tickets cost up to $100,000 per couple—weren’t told in advance where the fundraiser is or who is hosting it. Instead, they were told to arrive at a parking place in Palo Alto, from which they will be transported to the event.”

Rep. Paul Cook (R-CA) will retire from Congress at the end of this term and run for a seat on the San Bernardino County Board of Supervisors, the Los Angeles Times reports.