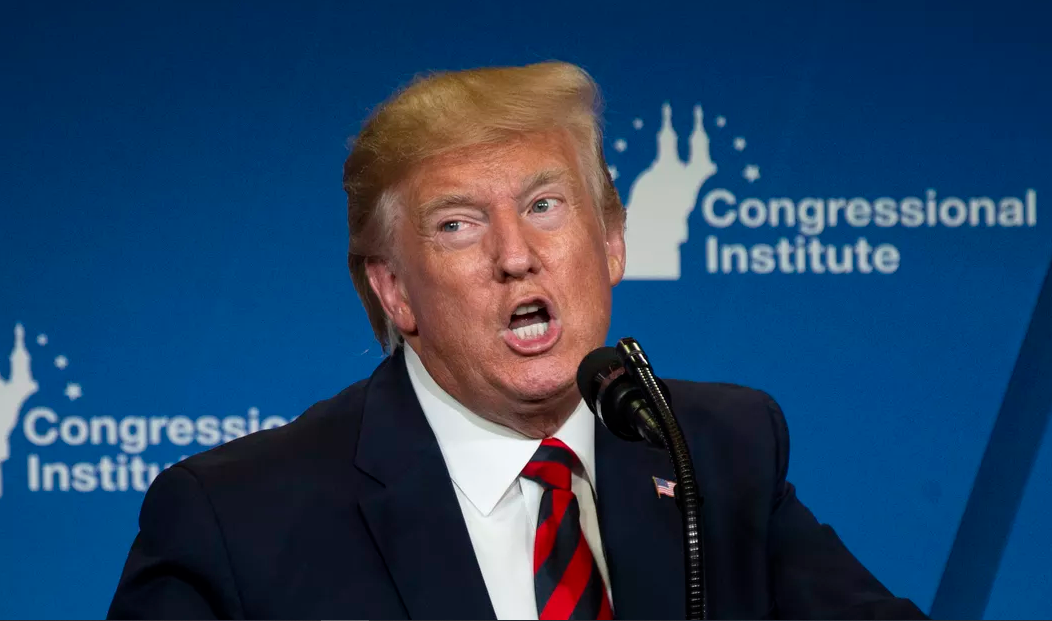 “Mr. Trump looked over a gathering of American and Egyptian officials and called out in a loud voice: ‘Where’s my favorite dictator?’ Several people who were in the room at the time said they heard the question.”

“The witnesses said they believed the president made the comment jokingly, but said his question was met by a stunned silence.”

He wasn’t joking, but he was lying. We all know that Putin is his favorite.

Lawfare: “No media organization has reported that this is what happened Thursday, but something clearly happened when the grand jury met—and that something wasn’t the McCabe indictment that everyone was expecting.”

“Normally, when the Justice Department informs a criminal target that it is moving ahead with charges, particularly when the target is a high-profile one, the indictment follows immediately. Yet in this case, no indictment materialized. And that wasn’t because the grand jury didn’t meet.”

Harry Litman: “A Grand Jury’s refusal to return an indictment is something that happens maybe once every five years in a given office. If it occurred here, given the magnitude and visibility of the McCabe case, it is a stunning and humiliating rebuke for overreaching and playing politics.“

Trump promised — yet again — new tax cuts next year, claiming they would be “very, very substantial,” without offering any more details.

Said Trump: “We’re working on a tax cut for the middle-income people that is going to be very, very inspirational. It’s going to be something that I think everyone is looking for.”

“The Trump administration on Thursday announced the repeal one of the Obama era’s most sweeping environmental rules — a set of pollution protections for small streams and wetlands that had riled up opposition from coal miners, home developers, farmers and oil and gas drillers,” Politico reports.

“The action creates instant doubts about the legal status of myriad seasonal or isolated wetlands and thousands of miles of waterways, including vast swaths of the arid West. And it clears the way for the Environmental Protection Agency to finish a follow-up regulation in the coming months that could leave most of the nation’s wetlands without any federal safeguards.”

“The U.S. budget gap widened to more than $1 trillion in the first 11 months of the fiscal year, the Treasury Department said Thursday, the first time deficits have topped that amount in seven years,” the Wall Street Journal reports.

“Russian authorities have staged nationwide raids on the regional offices of opposition leader Alexei Navalny, as well as the homes of dozens of staff and supporters,” CNN reports.

“Navalny said more than 200 searches had taken place at addresses across 41 cities, indirectly comparing the sweep to mass arrests during the height of Soviet repression.”

Sen. Rand Paul (R-KY) called into KTWO to discuss his feud with Rep. Liz Cheney (R-WY) and said that he thought Wyoming Republicans were in agreement with him on foreign policy issues like the Afghanistan war.

Politico: “At a mid-August fundraiser in Jackson Hole, Wyo., Ivanka Trump was asked to name the personality traits she inherited most from her parents. Without much of a pause, Trump told the crowd of roughly 120 high-end donors that her mother gave her an example of how to be a powerful, successful woman.”

“And her father? He passed onto her his moral compass, she said, according to two event attendees. The exchange was part of a broader conversation about Ivanka Trump’s life in Washington and the White House during a swanky retreat organized by Republican House Minority Leader Kevin McCarthy in the Wyoming mountains. Her appearance signaled an informal effort by the Trump campaign, family and top aides to woo donors this election cycle by sharing intimate, colorful details about this atypical White House.”

From her father. That explains a lot.

“The report details the importance of each of the 51 military projects chosen by the Trump administration to lose their funding, including construction of a new gate to address a growing security concern at an overseas U.S. base, projects to build facilities to safely store more than $1 billion in munitions overseas, and even replacing a boiler whose failure is ‘imminent’ and could cause the evacuation of an entire base in Alaska.”

Politico: “The tally represents the preliminary results of an Air Force review launched after Politico reported last week that an Air National Guard crew stayed at Turnberry in March. Congressional Democrats have also been investigating military stays at the property, but have yet to receive any information from the Pentagon.”

Reuters: “The Trump administration is moving forward with a plan to revoke California’s authority to set its own vehicle greenhouse gas standards and declare that states are pre-empted from setting their own vehicle rules.”

“President Donald Trump met with senior officials on Thursday at the White House to discuss the administration’s plan to divide its August 2018 proposal to rollback Obama era standards through 2025 and revoke California’s waiver under the Clean Air Act to set state requirements for vehicles.”

Jonathan Bernstein: “Trump is, as political scientists like myself and Matt Glassmanhave been saying for some time, a very weak president. Congressional Republicans basically ignore his policy ideas. He loses battles to the executive-branch bureaucracy all the time. He’s been reduced to hiring flunkies and family members so he can get his way within the White House, and even they don’t seem to listen to him half the time. For those familiar with Richard Neustadt’s study of the presidency, this is no surprise: Trump is unpopular and has a poor professional reputation, so he’s not going to have very much influence.”

“What this means is that the political system is basically working. It’s imposing serious consequences on the president for doing a bad job. Refusing to respect the rules of the office is one of the ways that presidents can harm their reputations. And Trump’s unpopular Twitter persona and generally unpresidential behavior are partly why his approval rating is some 15 percentage points below where it would be based only on the economy and other fundamentals. Presidents normally care desperately about power, and Trump is squandering his.”

“The only problem is that he doesn’t realize it. We can’t know what he really thinks, but he seems to believe he’s wildly popular despite evidence to the contrary. As for his reputation? Again, we can’t know what’s in his head. But based on his public statements, he seems to think that what he’s doing is working – and if anything isn’t working, it has nothing to do with him.”

“Beto O’Rourke early Friday morning characterized an incendiary tweet from a Texas state representative as ‘a death threat’ against him, and charged that the Republican lawmaker should be stripped of his assault weapon,” Politico reports.

“House Republicans were hoping to have their spirits lifted at this year’s annual retreat, which comes following a bruising midterm election and recent wave of GOP retirements. And President Donald Trump did not disappoint,” Politico reports.

“The rambling, 68-minute speech – which alternated between teleprompter lines and a free-flowing stream of jabs – served as counter-programming to the Democratic debates, which were taking place at the same time halfway across the nation. Trump was even scheduled to speak an hour earlier than he did — a delay that allowed him to start just as Democratic presidential candidates were taking the stage in Houston.”

“And at times, it felt like a campaign rally, with Trump even ending with his signature campaign song: ‘You Can’t Always Get What You Want.’”

Axios: “The decision dredges up one of the president’s most persistent ongoing legal threats. It’s a high-level ruling for such a case and could force the president to defend himself in court because only an expanded version of the Second Circuit or the Supreme Court could overturn the decision.”