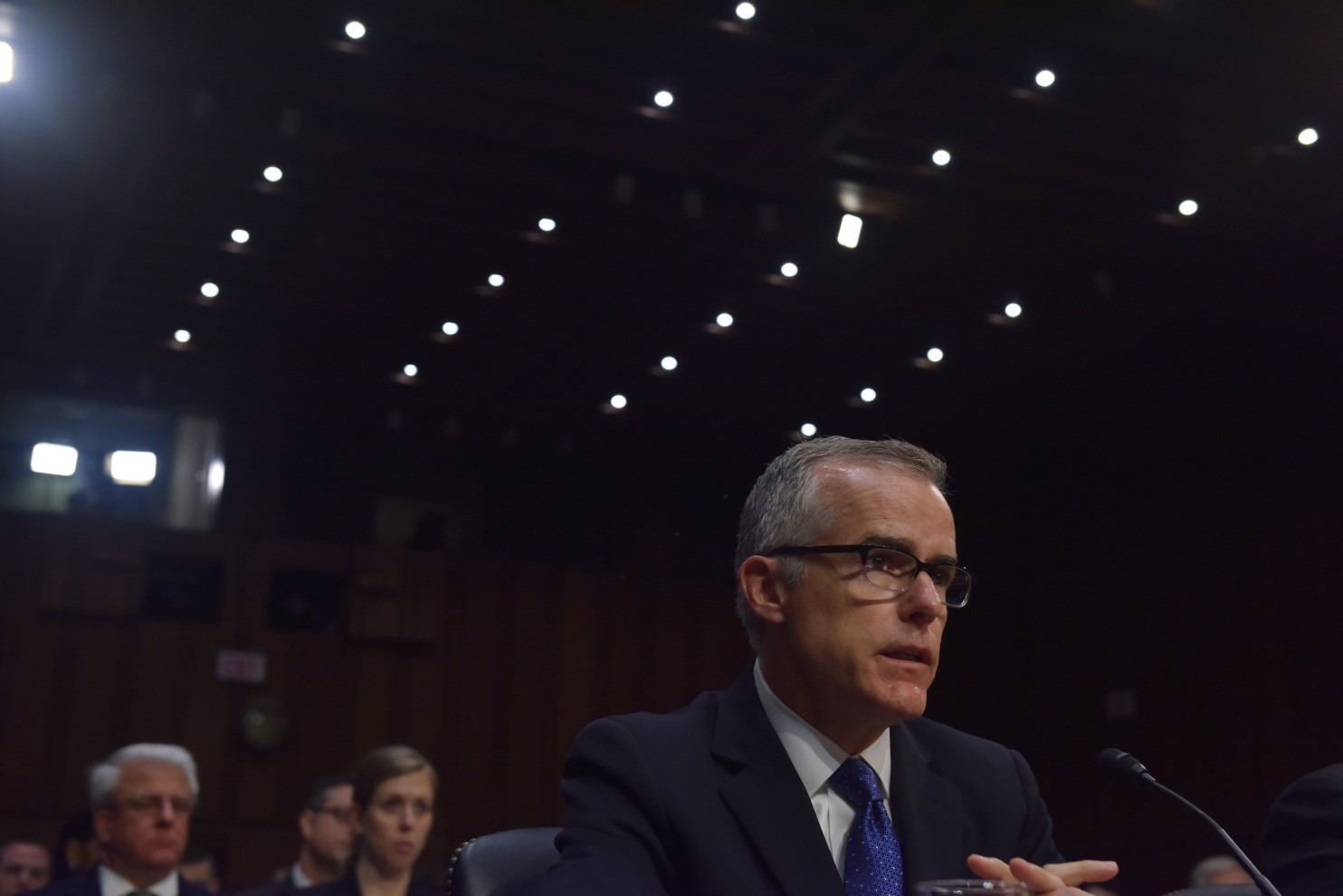 “It is still not clear what specific charges prosecutors have recommended be brought against McCabe, who was fired in March 2018 after the Justice Department’s inspector general concluded that McCabe had leaked information to the media without permission and then made false or misleading statements to officials when asked about it.”

“A team of Trump administration officials toured a California facility once used by the Federal Aviation Administration this week as they searched for a potential site to relocate homeless people,” the Washington Postreports.

“President Trump has directed aides to launch a major crackdown on homelessness in California, spurring an effort across multiple government agencies to determine how to deal with sprawling tent camps on the streets of Los Angeles and other cities.”

Politico: “The U.S. government concluded within the last two years that Israel was most likely behind the placement of cell-phone surveillance devices that were found near the White House and other sensitive locations around Washington, D.C.”

“But unlike most other occasions when flagrant incidents of foreign spying have been discovered on American soil, the Trump administration did not rebuke the Israeli government, and there were no consequences for Israel’s behavior.”

“The miniature surveillance devices … mimic regular cell towers to fool cell phones into giving them their locations and identity information … they also can capture the contents of calls and data use.”

“The devices were likely intended to spy on President Trump… though it’s not clear whether the Israeli efforts were successful.”

New York Times: “As Democrats make an aggressive push for new gun control legislation, they have made a calculated decision to stop short of pursuing their most ambitious goal: an assault weapons ban.”

“The overwhelming majority of House Democrats — 211, seven shy of the 218 needed for passage — are co-sponsoring legislation to ban military-style semiautomatic weapons, similar to the ban in effect from 1994 to 2004. But some centrist Democrats remain skittish about any proposal that keeps firearms from law-abiding citizens — a frequent charge against Democrats by Republicans and gun rights groups — making any such ban politically risky for moderates in Trump-friendly districts. In the Senate, it draws less support.”

“The split reveals just how complicated gun politics remain inside the Democratic Party, even as mass shootings are terrorizing the nation and the Twitter hashtag #DoSomething has captured the mounting public demands for Congress to act.”

“Chief Justice John Roberts cast the deciding vote against President Trump’s attempt to add a citizenship question to the 2020 census, but only after changing his position behind the scenes,” sources familiar with the private Supreme Court deliberations tell CNN.

“More broadly, his moves in the census dispute demonstrate that as he begins his 15th year as chief justice, Roberts has become less predictable. He is wearing the heavy mantle of a vote at the middle of a divided bench in this new chapter of his tenure, with the 2018 retirement of centrist-conservative Justice Anthony Kennedy and a solid 5-4 conservative majority.”

Edward Luce: “Donald Trump, as the saying goes, should be taken literally as well as seriously. Mr Trump often raises the prospect of securing an illegal third term in 2024. He recently told global football officials that he should still be America’s president when it hosts the World Cup in 2026. Mr Trump often follows up by saying: ‘Only kidding’. Then he raises the theme again — twice in the past week; once at a rally in North Carolina, the second time on Twitter.”

“Should Americans accept that Mr Trump is joking? Only at great risk. No other U.S. president has faced the prospect of being re-elected or going to jail. Whether a defeated Mr Trump would actually be prosecuted — by the Southern District of New York, for example, and for any number of alleged crimes — is immaterial. All that matters is whether Mr Trump believes he could face jail. To judge by Mr Trump’s words and actions, he considers victory in next year’s election to be an existential necessity.”

“This includes creating the climate for a repeat of the 2016 election.”

Washington Post: “The Judiciary Committee vote Thursday allows the committee counsel to question witnesses in public hearings and makes several other changes to panel rules. The procedural tools are similar to those used in the impeachment proceedings against Presidents Richard M. Nixon and Bill Clinton.”

“A group of Judiciary Committee Democrats has begun privately mapping a list of possible charges against President Trump, sketching out the contours of potential articles of impeachment even as House leaders publicly resist taking such action,” the Washington Post reports.

“The closely held, informal discussions between some committee lawmakers and aides close to the investigations say the charges include a range of allegations — some that echo charges against former president Richard M. Nixon: obstruction of justice, abuse of power and defiance of subpoenas, as well as violation of campaign finance law and allegations of self-enrichment, said the individuals, who spoke on the condition of anonymity because of the sensitive nature of their work.”

Rep. John Lewis (D-GA) told Politico that he’s close to a decision on whether to support impeaching President Trump. Said Lewis: “My time is growing near. I’ve never been supportive of this so-called president. Before he was inaugurated I said he was not legitimate. So I have some very strong feelings.”

“A measure of underlying U.S. inflation accelerated by more than forecast to a one-year high in August, signaling inflation was already firming ahead of fresh tariffs on Chinese goods this month that may push prices higher for Americans,” Bloomberg reports.

“The core consumer price index, which excludes food and energy, rose 0.3% from the prior month and was up 2.4% from a year earlier, a Labor Department report showed Thursday. That exceeded the median estimates in a Bloomberg survey, while the broader CPI climbed 0.1% on the month and a below-forecast 1.7% annually.”

Jonathan Bernstein: “The basic problem [regarding impeachment] is that House Democrats can’t seem to agree on where their impeachment effort stands. Judiciary Committee Chairman Jerrold Nadler says that ‘formal impeachment proceedings’ are underway. Others, including in the House leadership, have expressed much more ambiguous views of what’s happening.”

“A few things are contributing to this muddle. One is a push from many party actors who basically judge everything short of impeaching President Trump as a total flop – a position that I still think doesn’t make much sense. Another is that some House Democrats in tough districts are overly cautious about taking on the president. But perhaps the biggest factor is that the Democrats have had a majority in the House for more than nine months now and have at best managed to produce a handful of memorable moments in oversight hearings on Trump’s many scandals and general lawlessness. At best. Maybe.”

“Under this scenario, the country’s top diplomat would absorb the national security adviser role and do both jobs.”

“That would make Pompeo the second person in history to have both jobs at the same time. The first, Henry Kissinger, was already President Richard Nixon’s national security adviser when he was appointed secretary of state in 1973, and filled both roles for two years.”

But President Trump on Thursday shot down rumors that he might name Pompeo as national security adviser while also keeping him as secretary of State, Politico reports. Said Trump: “I think he’s fantastic. But I actually spoke to Mike Pompeo about that. He decided — I get along with him so well. We have a lot of the same views and a couple of a little different views. But he likes the idea of having somebody in there with him, and I do, too.”

“Officials from the district attorney’s office, led by Cyrus Vance, interviewed Cohen at the federal prison in Otisville, New York, where he is serving a three-year sentence after pleading guilty to multiple crimes including campaign finance violations tied to payments to two women alleging affairs with Trump a decade ago.”

“A no-deal Brexit could result in rising food and fuel prices, disruption to medicine supplies and public disorder on Britain’s streets, according to secret documents the government was forced by MPs to publish on Wednesday,” The Guardian reports.

“A five-page document spelling out the government’s ‘planning assumptions’ under Operation Yellowhammer – the government’s no-deal plan – was disclosed in response to a ‘humble address’ motion.”

“Senior White House adviser Jared Kushner told Senate Republicans Wednesday that the party should unite behind a 600-page immigration plan he crafted ahead of the 2020 election so the party can provide a positive vision for immigration reform,” The Hill reports.

“Kushner’s main message to Senate Republicans was it would be smart for the party to unify behind a plan to counter Democratic attacks that Republicans don’t have any interest in fixing the nation’s broken immigration system.”

Susan Glasser: “The spectacle of the Trump Presidency often overwhelms our ability to process the stakes of any individual episode. But the firing of John Bolton was not just another Washington farce in what the President himself has now started calling, as he did the other day, on Twitter, ‘the Age of Trump.’ Bolton’s exit serves as a reminder that the intensive national-security decision-making process of previous Presidents, Republican and Democrat alike, has been abandoned by Trump, subverted to the Presidential ego, and will not return for the duration of his tenure.”

“It’s worth remembering that, as all this played out inside the White House, the Taliban almost showed up at Camp David, in time to mark the eighteenth anniversary of 9/11. Bolton, who evidently made his vocal opposition to the idea known to the media in a way that likely hastened his firing, didn’t stop Trump from hosting them. Nor, for that matter, did Pompeo, whose State Department team has been overseeing the talks. In the end, it was only the Taliban’s decision to continue killing American soldiers while simultaneously negotiating with the United States that provided the pretext for Trump to put a stop to his own hastily conceived idea. Trump will now become the only President ever to have had four national-security advisers in three years, but he might as well consider not having one at all.”