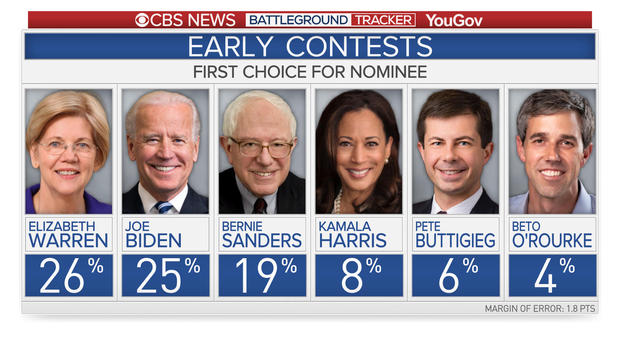 Key takeaway: “Nearly 6 in 10 Democratic-leaning voters say they would consider switching to support another candidate for the party’s nomination or that they still don’t have a preference.”

The latest CBS News/YouGov polls in the early voting states:

“Buoyed by youth and a dynastic name, Representative Joseph Kennedy would hold an immediate edge over Sen. Edward Markey should the 38-year-old congressman launch a primary challenge to the seasoned incumbent,” according to a new Suffolk University/Boston Globe poll.

“Kennedy would lead a five-person field by 9 percentage points, 35% to Markey’s 26%.

“And in a head-to-head matchup, Kennedy’s advantage would grow even larger: 14 percentage points — 42% to 28%. He would best Markey in every age group and across wide geographic swaths of the state.”

This is the combined poll when all four states above are added together.

Trump campaign manager Brad Parscale predicted that “the Trumps will be a dynasty that lasts for decades,” Politico reports.

The poll Biden leading the field of 2020 Democratic presidential candidates with 26% support, followed by Warren with 24%, within the margin of error. Sen. Bernie Sanders was in third place with 8%, while Pete Buttigieg came in fourth with 5%. No other Democratic candidate registered more than three percent in the poll.

The results represent a 14-point gain for Warren since a June Suffolk/Globe poll found her with the backing of 10% of likely voters.

New York Times: “As they prepare for Thursday’s debate in Houston, many of the second-tier candidates are pursuing a one-two punch strategy: planning and practicing what they hope are breakout moments, while deepening their on-the-ground and advertising campaigns to take advantage of a strong debate performance.”

“Faced with an ever-shrinking calendar before February’s Iowa caucuses and voters who are eager to narrow the choices, the 17 candidates lagging the front-runners are grasping for fresh ways to distinguish themselves and jolt a race that appeared to settle into two distinct divisions this summer.”

“Billionaire Tom Steyer’s campaign said Sunday he has qualified for the October Democratic presidential primary debate, giving his campaign a much-needed opportunity for publicity as he looks to break out of the bottom of the Democratic field,” CNN reports.

“The longtime Democratic donor, now the 11th candidate to qualify for the DNC debate, made the cut on Sunday after a CBS News/YouGov pollfound him polling at 2% in the early voting state of Nevada.”

Axios: “Of the 100 stories about Joe Biden that have received the most social media attention over the last 3 weeks, 77 were negative… Of the 25 biggest stories, 24 were negative.”

“Secretary of State Mike Pompeo continued to deflect questions Sunday about his political future, declining to swear off a run for the Senate from his home state of Kansas next year,” the Washington Post reports.

“Pompeo, who represented the southern portion of central Kansas for six years in the House before joining President Trump’s Cabinet, has been Senate Republican leaders’ top choice to replace retiring Sen. Pat Roberts (R). They believe he could clear the GOP field and easily win the general election.”