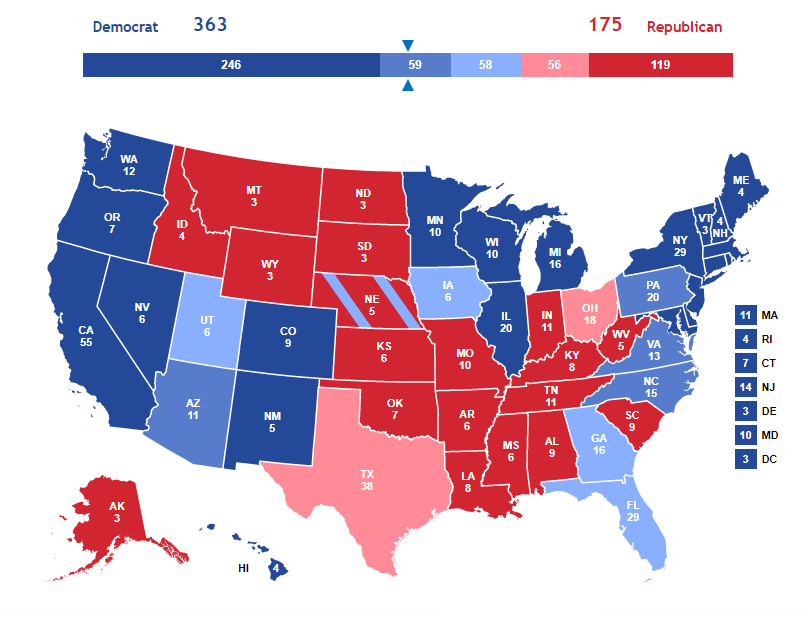 The map above is based on the current Presidential Approval ratings in each state of President Trump. If he is underwater (i.e. disapproval outnumbers approval), the state is colored a shade of blue depending on how far underwater he is.

“As Democrats try to win control of the White House and the Senate in 2020, they face a geographical puzzle — the path to the presidency may conflict with the one to a Senate majority,” the AP reports.

“Democrats’ best shot at the White House is to win back their old turf — the Rust Belt states heavy with working-class white voters who have become increasingly difficult to hold in the party’s tent. But the path to winning the Senate travels through what many believe is the Democrats’ territory of the future. College-educated suburbanites, young people and minorities make up the winning coalition in Arizona, Colorado, Georgia and North Carolina, the states where Democrats will need to pick up seats to wrest control of the Senate from the GOP.”

“The tensions between the two contests — the two paths to two different victories — highlight the geographic concerns that have long bedeviled Democrats. The party has successfully built support in the growing West and Sun Belt states, but not yet enough to put the fight over the Rust Belt in the rearview mirror.”

Sen. Joni Ernst (R-IA) said at a recent town hall that lawmakers should discuss fixing Social Security “behind closed doors,” the Washington Post reports. Ernst, who is running for reelection in 2020, made the remarks Saturday, according to a video posted by the Democratic super PAC American Bridge.

Said Ernst: “I do think, as various parties and members of Congress, we need to sit down behind closed doors so we’re not being scrutinized by this group or the other, and just have an open and honest conversation about what are some of the ideas that we have for maintaining Social Security in the future.”

Goodbye Senator Ernst. You will be defeated by Theresa Greenfield in Iowa now.

Rep. Joe Kennedy III (D-MA) sounded like a U.S. Senate candidate in an interview with CBS Boston, especially when “pressed to expand on the systemic change he has said he could bring to Washington.”

“In our interview, he endorsed several controversial ideas that have been floated in recent months – abolishing the electoral college system that can and does award the presidency to the popular vote loser, installing term limits on Supreme Court judges, and doing away with the Senate filibuster, a tactic often used to block bills that have majority support.”

Peter Hamby: “They’ve each been dismissed by the pundit class and, predictably, the Republican establishment, which is doing everything in its power to box out even a whiff of a sedition. These Never Trumpers are scoffed at for two main reasons. First, it’s impossible to win the primary. And second, none of these Trump challengers have the kind of star power or message that might result in a serious weakening of Trump’s standing among Republicans. The first point is not in question: Trump’s approval rating among Republicans is anywhere from 79 to 88%, depending on the poll, and the last Republican president to lose a primary was Chester Arthur in 1884.”

“But the second assumption deserves more scrutiny. Weld has been in the race since April, to little effect in the media. But according to an Emerson poll from August, Weld is still somehow pulling 16% of the Republican vote against a sitting Republican president, a number that would give any White House political director pause. (Imagine how much media attention would be given to an Obama primary challenger running in double digits at this point in 2011.) The Republican and independent voters who will have a say in the primary, especially in a mercurial state like New Hampshire, are still only dimly aware of these upstart campaigns. Press attention is largely focused on the Democrats. Walsh and Sanford have not yet prosecuted their cases.”

“Former Starbucks CEO Howard Schultz formally abandoned his pursuit of an independent campaign for president Friday, telling his supporters in a letter that he found it tougher than he expected to capture the attention of moderate voters and that he didn’t want to risk reelecting President Trump,” the Washington Post reports.

“Schultz’s decision, after spending months away from public life because of health issues, will come as a relief to Democratic leaders, who feared an independent candidacy by a self-funded billionaire would hobble their eventual nominee. Despite growing frustration with the country’s politics, his aborted run serves as a cautionary tale about the resiliency of the country’s two-party political system.”

Washington Post: “According to two advisers who requested anonymity and a source who spoke with Biden, Biden’s campaign believes he needs to win two of the first four early states. One of those states probably needs to be Iowa or New Hampshire, the sources said. But he can’t get blown out in either — or in the third early state, Nevada, which Biden has visited less often than the others.”

Wall Street Journal: “Mr. Trump has hosted more than 550 ticketed campaign events since 2015, at least 70% of which include his trademark rallies, according to Republican officials. These rallies form the core of one of the most steadfast political movements in modern American political history, a dynamic that has reordered the Republican Party.”

“Mr. Trump’s perpetual tour attracts a coterie of political pilgrims who travel across the country and encamp outside arenas for days at a time for the chance to stand in the front row and, for 90 minutes, cheer the man they say has changed the U.S. and, in many cases, their own lives. Somewhere between 5% to 10% of attendees have been to multiple events.”

Politico: “Four states are poised to cancel their 2020 GOP presidential primaries and caucuses, a move that would cut off oxygen to Donald Trump’s long-shot primary challengers. Republican parties in South Carolina, Nevada, Arizona and Kansas are expected to finalize the cancellations in meetings this weekend, according to three GOP officials who are familiar with the plans.”

“The moves are the latest illustration of Trump’s takeover of the entire Republican Party apparatus. They underscore the extent to which his allies are determined to snuff out any potential nuisance en route to his re-nomination — or even to deny Republican critics a platform to embarrass him.”

New York Gov. Andrew Cuomo is pushing to upend the presidential primary calendar, making New York jump close to the head of the line by having voters head to the polls in February instead of late April, sources tell NY1.