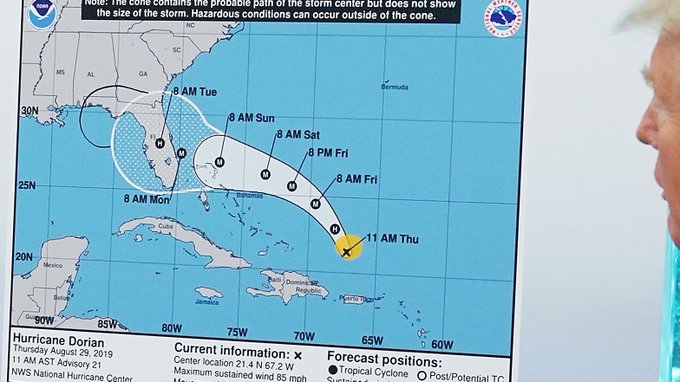 Trump can never admit he is or was wrong. It’s because he is not only a deeply insecure man, but also an outrageously narcissistic sociopath.

Last week, on Wednesday, August 28, the National Weather Service released the above forecast map. At that time, Hurricane Dorian had not yet hit the Bahamas and it looked liked it was on a path to directly hit Florida head on. As we all know, on Thursday and Friday, new model forecast a different path that pulled the hurricane north after hitting the Bahamas. On Sunday, Trump tweeted that Alabama was going to be hit by the Cat 5 monster.

The National Weather Service had to correct Trump by tweeting that Alabama was never in any forecast warning and is not in danger from the hurricane. So today, Trump took that August 28 map, now hopelessly out of date, and drew a new “cone of danger” with his beloved Sharpee pen so that Alabama would now be included, to retroactively prove him right. He is insane.

It is a violation of federal law to falsify a National Weather Service forecast and pass it off as official.

Matthew Yglesias: “Though all recent presidents have had a somewhat inexplicable love of golf, when Trump goes golfing it’s different from normal presidential golfing because he golfs at luxury golf clubs that he owns.”

“This means that when the White House senior staff and the Secret Service do things like rent golf carts to ensure that the president remains safe and well-briefed while on the links, it’s not just an expenditure of public funds but an expenditure that directly lines Trump’s pockets. This just about the most straightforward example of political corruption that one can imagine. (When it turned out that Baltimore Mayor Catherine Pugh was making companies that contracted with the city buy copies of her book, she was drummed out of office almost immediately.)”

“But in the United States of Trump, it wasn’t even the most egregious golf-related act to stem from the ill-fated trip to Poland. Yet nobody in any position of influence in politics seems to be trying to do anything about it.”

“President Trump is staring down a series of trigger points that will determine whether he enters the 2020 campaign backed by his most valuable asset — a healthy U.S. economy — or empty-handed and further on the defensive,” Politico reports.

“The White House faces a time crunch on several major policy fronts this fall. The president will need to appease farmers and factory workers about his ongoing trade standoff with China, in which he shows no sign of backing down. His administration is trying to cajole the Democratic-controlled House to approve a renegotiated trade deal covering the U.S., Mexico and Canada. And the Trump team must find a way to calm Wall Street to prevent investors from denting one of his proudest achievements — a surge in the stock market since his election.”

In a procedural vote, the British House of Commons voted to stop a no-deal Brexit on October 31 by 329 votes to 300 — a majority of 29. That majority is two bigger than the one last night.

And then, in a third blow to Prime Minister Donald Trump European Version, the House of Commons rejected his motion calling for a general election by 298 to 56. Because many opposition MPs abstained, it did not receive the two thirds majority required to trigger national ballot.

Axios: “It’s a disastrous start for the new prime minister, who campaigned on a pledge to leave the EU on Oct. 31 with or without a deal. No prime minister has lost their first vote in office since 1783 — let alone their first 3.”

“The opposition Labour Party said it would not back an election until the bill ruling out a no-deal is enshrined in law. It has to pass through Parliament’s upper chamber, the House of Lords, for that to happen.”

White House officials told the Wall Street Journal that they believe they have made progress on new measures to restrict guns in their conversations with U.S. senators — such as improving background checks, temporarily taking firearms away from dangerous people and boosting mental-health services — “but it remains unclear what a legislative package might include.” Said one White House official: “We’ll need direction from the president.”

CNN: “Trump aides said an effort was now underway to find a soft landing for Madeleine Westerhout, who also served as director of Oval Office operations. It was not yet clear where she would land, but the effort fit a pattern by White House officials, campaign aides and others in Trump’s orbit to ensure that senior White House officials and others close to the President are taken care of after they leave the building.”

“However, one former administration official marveled at how poorly the Trump White House handles the ouster of employees by firing and embarrassing them before trying to find them a cushy job on the outside. The official said in other administrations an employee who could be a liability was kept in the fold by moving them into another attractive role in the administration to prevent unseemly disclosures.”

Sidney Blumenthal: “President Trump extemporaneously speaks about Abraham Lincoln as if he were his rival. He has boasted that his poll numbers are greater than Lincoln’s, though there were no opinion polls in the 19th century. He has invidiously compared Lincoln with one man he always casts as heroic and whose monuments he defends as sacrosanct: ‘a great general,’ Robert E. Lee.”

“And yet, to ward off criticisms of Trump’s bursts of racist rhetoric, Republican leaders reflexively play the Lincoln card. ‘We are the party of Lincoln,’ proclaimed House Minority Leader Kevin McCarthy (R-CA.) to shield Trump with the icon of the Great Emancipator.”

“But the party of Trump is the antithesis of the party of Lincoln, the culmination of a long realignment. Beginning in the 1960s, the party embraced a Southern strategy, forsaking the remnants of its Lincolnesque heritage in exchange for the principles of states’ rights and resistance to civil rights for African Americans previously associated with the neo-Confederate Dixiecrat wing of the Democratic Party. As a result, the Republican Party changed its identity and abandoned its original principles, becoming strikingly similar to the very opponents that roused Lincoln to resist in the beginning.”

“Democrats on the House Judiciary Committee have a new investigative emphasis this fall — they plan to focus on hush money payments arranged on behalf of women who had sexual encounters with President Trump,” Vox reports.

“And one major unanswered question that they should push hard for answers on is: why, exactly, did the Justice Department’s investigation into this end earlier this year — when prosecutors had said that Trump directed these illegal payments?”

“There are several possibilities. Per NBC News, House Democrats suspect due to DOJ’s policy against indicting a sitting president. It’s also possible that prosecutors just thought their case wasn’t strong enough — or that there was interference from higher-ups.”

“Joe Balash — who oversaw oil and gas drilling on federal lands before resigning from Interior on Friday — is joining a foreign oil company that’s expanding operations on Alaska’s North Slope,” the Washington Postreports.

“Balash, who had served as the Interior Department’s assistant secretary for Land and Minerals Management for nearly two years, confirmed in a phone interview Tuesday night that he will begin working for the Papua New Guinea-based Oil Search, which is developing one of Alaska’s largest oil prospects in years.”

“Carrie Lam, Hong Kong’s chief executive, said on Wednesday that she was withdrawing a contentious extradition bill that set off months of protests in the city, moving to quell the worst political crisis since the former British colony returned to Chinese control 22 years ago,” the New York Times reports.

“The move eliminates the major objection among protesters, but it was unclear if it would be enough to bring an end to intensifying demonstrations, which are now driven by multiple grievances with the government.”

Washington Post: “By arming and backing a Saudi-led coalition fighting in Yemen, the United States, Britain and France may be helping to commit potential war crimes, the United Nations said in a scathing report Tuesday that called for more accountability by all sides in Yemen’s five-year-old war.”