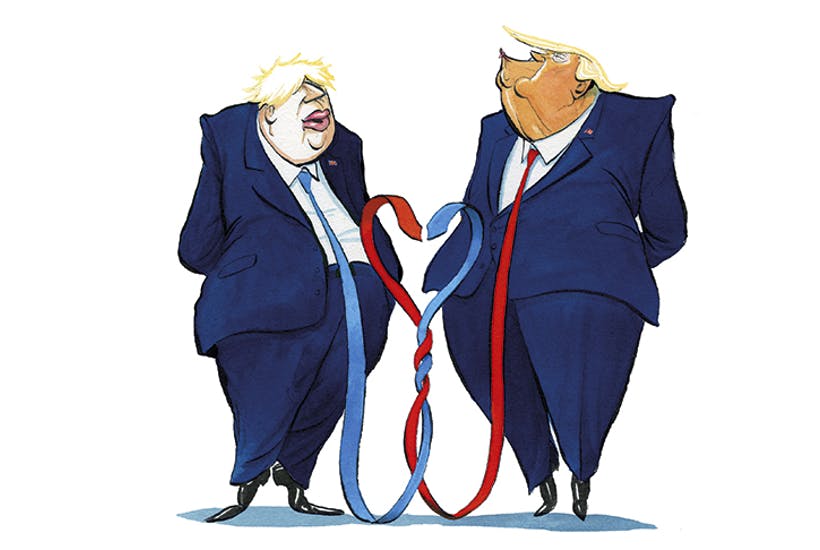 “British lawmakers on Tuesday rose up against Prime Minister Boris Johnson, moving to prevent him from taking the country out of the European Union without a formal agreement, and precipitating an epic showdown that could provoke a snap general election,” the New York Times reports.

“The lawmakers voted to take control of Parliament away from the government, giving themselves the authority to pass legislation that would stop the prime minister from his threat of a no-deal Brexit.”

The 328 to 301 vote was a massive blow to Johnson, who immediately called for new elections. However, Labour leader Jeremy Corbyn won’t support new elections until the Brexit delay is passed.

Washington Post: “The procedural vote capped a humiliating day for Johnson, who was jeered, heckled and laughed at mercilessly as he defended his hard-line Brexit stand in Parliament.”

Britain’s governing Conservative party lost its majority today as one of its MPs defected to join the anti-Brexit Liberal Democrats, Politico reports.

“Phillip Lee sat on the opposition benches on Tuesday as Prime Minister Boris Johnson stood to deliver a statement in the House of Commons. The move increases pressure on Johnson, whose majority was already looking shaky, but does not automatically trigger an election because that would require a separate vote.”

Senate Majority Leader Mitch McConnell (R-KY) stressed that President Trump’s support is the key to a gun reform bill getting a vote on the Senate floor in the wake of recent mass shootings, The Hill reports.

Said McConnell: “I expect to get an answer to that next week. If the president is in favor of a number of things that he has discussed openly and publicly and I know that if we pass it, it will become law, I’ll put it on the floor.”

He added: “I said several weeks ago that if the president took a position on a bill, so that we knew we would actually be making a law and not just having serial votes, I’d be happy to put it on the floor.”

“Esper determined that the use of the military construction funds was necessary to support American forces deployed to the southern border with Mexico under the national emergency that Trump declared in mid-February. The formal determination allows Trump, under an obscure statute in the federal code overseeing the military, to tap the funds appropriated for other purposes without sign-off from Congress.”

“The Pentagon declined to release the list of 127 military construction projects that would be affected by the decision.”

“U.S. factory activity unexpectedly contracted in August for the first time in three years as shrinking orders, production and hiring pushed a widely followed measure of manufacturing to its lowest level since January 2016,” Bloomberg reports.

State judges ruled that North Carolina’s political maps for the state legislature are unconstitutional and must be redrawn before the 2020 elections, the Raleigh News & Observer reports.

Rick Hasen: “This is a huge development that will put the Republican-led North Carolina General Assembly in a tough position. Because this is decided as a matter of state constitutional law, it would be very hard to find a federal issue to take this to the United States Supreme Court for reversal.”

McKrae Game, who founded one of the nation’s biggest conversion therapy ministries, tells the Charleston Post & Courier that he’s gay.

“Now, the man once billed as a leading voice in the conversion therapy movement is trying to come to terms with the harm he inflicted while also learning to embrace a world and community he assailed for most of his adult life.”

“House Democrats plan to make President Trump’s alleged involvement in a 2016 scheme to silence two women who claimed they had affairs with him a major investigative focus this fall, picking up where federal prosecutors left off in a case legal experts say could have led to additional indictments,” the Washington Post reports.

“The House Judiciary Committee is preparing to hold hearings and call witnesses involved in hush-money payments to ex-Playboy model Karen McDougal and adult-film star Stormy Daniels as soon as October, according to people familiar with the plans who spoke on the condition of anonymity to describe internal discussions.”

A recently appointed Trump Labor Department official with a history of advancing controversial conservative and faith-based causes in court has resigned after revelations that he wrote a 2016 Facebook post suggesting the Jewish-controlled media “protects their own,” Bloomberg Law reports.

When President Trump was asked if he had a message for Poland — which was commemorating the anniversary of the start of World War II — he decided to congratulate the country, the Washington Post reports.

Said Trump: “I do have a great message for Poland. And we have Mike Pence, our Vice President, is just about landing right now. And he is representing me. I look forward to being there soon. But I just want to congratulate Poland. It’s a great country with great people.”

“For those not versed in World War II history, Sunday was the anniversary of the day Nazi Germany invaded Poland, which led France and Great Britain to declare war two days later (i.e. 80 years ago Tuesday). Poland would wind up losing nearly one-fifth of its population in the war, according to estimates.”

“But that windfall has passed by many Americans. The bottom half of all U.S. households, as measured by wealth, have only recently regained the wealth lost in the 2007-2009 recession and still have 32% less wealth, adjusted for inflation, than in 2003, according to recent Federal Reserve figures. The top 1% of households have more than twice as much as they did in 2003.”

Barry Ritholtz: “All of those bailouts, all of the government interventions and bank rescues, all of that ZIRP & QE & TARP and the rest of the alphabet of programs to save the financial system, and it has left half of American families below pre-crisis wealth.”

NBC News: “Trump’s persecution complex is an essential part of his brand — one which resonates deeply with a political base that believes anti-Trump liberals run the federal government and the media. But as he seeks re-election in 2020, he is banking heavily on his ability to blend it into a coherent narrative with the version of his presidency in which he’s been a commanding force, steamrolling adversaries to get things done.”

Said Trump, when he kicked off his re-election campaign: “This election is not merely a verdict on the amazing progress we’ve made. It’s a verdict on the un-American conduct of those who tried to undermine our great democracy, and undermine you.”

Susan Glasser: “The Trumpian extremes on display in the third August of his Presidency revived a debate about whether he is descending into even less Presidential behavior, shedding the remaining constraints imposed upon him by his office and the efforts of his ever-changing staff. If it seems as if Trump is wackier, angrier, more willing to lash out, and more desperately seeking of attention, that is because he is.”

“This, at least, is my conclusion after reviewing his Twitter feed from the past month, along with his public statements, remarks to the press, speeches, and rallies. To revisit a month in the life of this President was exhausting, a dark journey to a nasty and contentious place. And while Trump’s performance raised many questions that we can’t answer about just what is going on in his head, it was also revelatory: the thirty-one days of August, 2019, turn out to be an extraordinary catalogue of Trump’s in-our-faces meltdown.”

President Trump’s political allies are trying to raise at least $2 million to investigate reporters and editors of The New York Times, The Washington Post and other outlets, according to a three-page fundraising pitch reviewed by Axios.

Vice President Mike Pence is staying at Donald Trump’s Doonbeg luxury golf course in Ireland even though he has official meetings in Dublin across the country a three-hour drive away.

“Pence’s top aide said Tuesday that Pence and members of his traveling entourage are staying at a golf resort in Ireland owned by President Trump at Trump’s suggestion. But he defended an arrangement that Democrats have criticized as enriching the president, citing logistical concerns,” the Washington Post reports.

Sam Stein: “You would think the opposition party would have a field day with a president cancelling a trip to commemorate WWII so he could monitor a hurricane only to then be spotted playing golf two days in a row at his personal club. But I can’t even recall seeing one Dem take a whack.”

“In the meantime, Washington is stuck in an impeachment muddle — with Democrats straddling an ambiguous line between impeachment proceedings and standard congressional investigations. It’s a dynamic that will test the unity of a diverse Democratic caucus this fall, and shape the party’s battle to hold on to the House and defeat Trump in 2020.”