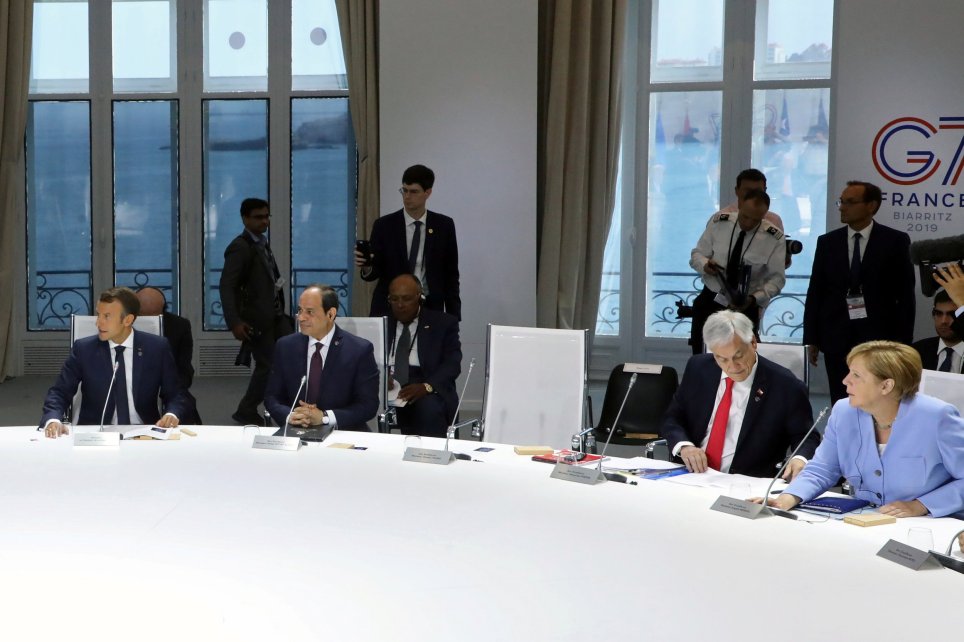 The empty chair, where the leader of the free world, the President of the United States, was supposed to sit in during a climate crisis meeting at the G-7. Never has there been a more symbolic picture.

After initially saying Chinese officials called over the weekend to restart talks about trade, President Trump was less specific when pressed by reporters for details on the calls, CNN reports. Said Trump: “I don’t want to talk about calls. We’ve had calls. We’ve had calls at the highest levels.”

“President Trump, under pressure to scale back a U.S.-China trade war partly blamed for a global economic slowdown, said Monday that the two sides will begin serious negotiations soon,” the AP reports. “Trump said his trade negotiators had received two ‘very good calls’ from China. He did not say when the calls were made and he declined to say whether he is in direct contact with President Xi Jinping.” “Trump said the conversations were a sign that China is serious about making a deal following the latest tit-for-tat tariffs between them.”

President Trump said Monday he was likely to hold next year’s Group of Seven summit in Doral, Fla., meaning he could personally profit from one of the world’s most prestigious gatherings of foreign leaders,” the Washington Post reports.

“Trump, appearing with German Chancellor Angela Merkel during a bilateral meeting at the G-7 conference, announced that Miami would be the host next year. He touted Trump National in Doral for its proximity.”

Said Trump: “They love the location of the hotel. We haven’t found anything that’s even close to competing with it. Really you can be there in a matter of minutes after you land.”

New York Times: “For a day, at least, everyone was on their best behavior when the cameras were on, eager to present a show of bonhomie after so many previous meetings ended in discord. But behind the scenes at the annual gathering of some of the world’s leading powers, President Trump still found himself at odds with his counterparts on Sunday over issues like trade, climate change, North Korea, Russia and Iran.”

“Ever so gingerly, as if determined not to rouse the American’s well-known temper, the other Group of 7 leaders sought to nudge him toward their views on the pressing issues of the day, or at least register their differences — while making sure to wrap them in a French crepe of flattery, as they know he prefers.”

“It was far from clear the messages were received, or in any case at least welcome. Like other presidents, and perhaps even more so, Mr. Trump tends to hear what he wants to hear at settings like this, either tuning out contrary voices or disregarding them. Through hard experience, other leaders have concluded that direct confrontation can backfire, so they have taken to soft-pedaling disagreements.”

“As the summit entered its final day, there was little sign that Trump and other world leaders had reached anything nearing a consensus on thorny issues including trade, climate change, and how to deal with Iran, North Korea and Russia,” the Washington Post reports.

“Illustrating the growing divide between world leaders, the French all-but-abandoned efforts to craft a joint statement at the end of the summit, cognizant of how the United States is drifting further away from other nations on a growing number of issues.”

“Porter, who resigned his post last year amid allegations that he abused his two ex-wives, was at the president’s side during several episodes of potential obstruction chronicled in Mueller’s 448-page report on Russian interference in the 2016 election and Trump’s attempted to thwart the probe.”

“The White House is likely to block Porter from complying with the committee’s subpoena, which seeks public testimony.”

Sen. Lindsey Graham (R-SC) publicly warned President Trump against a full or precipitous withdrawal of U.S. troops from Afghanistan, days ahead of an unofficial Sept. 1 deadline for a deal, the Washington Postreports.

“The United States and the Taliban are close to announcing an agreement on an initial U.S. troop withdrawal, along with plans to start direct discussions between the militants and the Afghan government.”

Annie Lowrey: “Recessions are never good for anyone. A sputtering economy means miserable financial, emotional, and physical-health consequences for everyone from infants to retirees. But the next one—if it happens, when it starts happening—stands to hit this much-maligned generation particularly hard. For adults between the ages of 22 and 38, after all, the last recession never really ended.”

“Millennials got bodied in the downturn, have struggled in the recovery, and are now left more vulnerable than other, older age cohorts. As they pitch toward middle age, they are failing to make it to the middle class, and are likely to be the first generation in modern economic history to end up worse off than their parents. The next downturn might make sure of it, stalling their careers and sucking away their wages right as the Millennials enter their prime earning years.”

“There, at the age of 25, she was introduced to Mr. Epstein’s odd life, with girls and young women coming through for what she recalled Ms. Maxwell describing as modeling auditions for the lingerie retailer Victoria’s Secret. The house at times bustled in anticipation of potential visits from Bill Clinton, although she never actually saw him there.”

“She said she met Donald Trump one day in Mr. Epstein’s office, recalling Mr. Trump eyeing her before Mr. Epstein informed him that ‘she’s not for you.’ Ms. Farmer’s mother, Janice Swain, recalled her daughter detailing the interaction with Mr. Trump around the time it occurred.”

Federal prosecutors appear to be in the final stages of deciding whether to indict Andrew McCabe, the former deputy FBI director and a frequent target of President Trump, on charges of lying to federal agents, the New York Times reports.

“An Oklahoma judge on Monday ruled against Johnson & Johnson in the Oklahoma opioid trial, forcing the company to pay the state $572 million in the first trial in the U.S. seeking to hold a drugmaker accountable for helping fuel the epidemic,” CNBC reports.

Associated Press: “The communications on China from Trump and his administration since late last week — erratic, sometimes contradictory — are complicating their high-stakes talks with Beijing and elevating the risks to the fragile global economy.”

“The messaging has been confusing not just for Chinese officials as they formulate a response to whatever stance the administration is taking. It’s also a problem for American businesses.”

“The shifting positions and threats could eventually weaken the U.S. and world economies by leaving businesses paralyzed by uncertainty over whether and where to situate factories, buy supplies and sell products.”