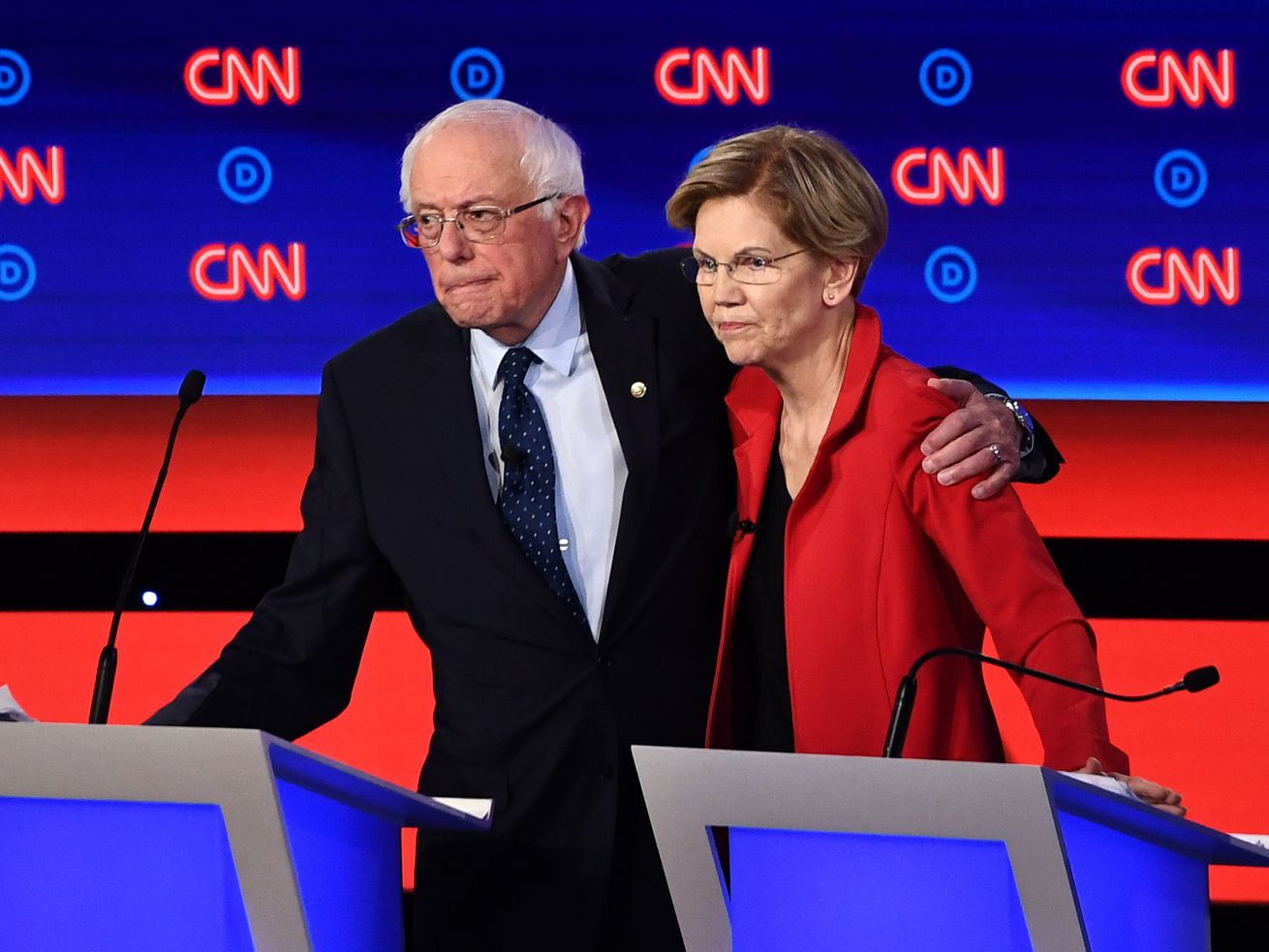 A new Monmouth poll finds a virtual three-way tie in the Democratic presidential race with Elizabeth Warren at 20%, Bernie Sanders at 20% and Joe Biden at 19%.

Compared to Monmouth’s June poll, these results represent an increase in support for both Sanders (up from 14%) and Warren (up from 15%), and a significant drop for Biden (down from 32%).

The frontrunners are followed by Kamala Harris at 8%, Cory Booker at 4%, Pete Buttigieg at 4%, Andrew Yang at 3%, Julián Castro at 2%, Beto O’Rourke at 2% and Marianne Williamson at 2%.

The sample size for the poll (298) is concerning, but Monmouth is an A+ polling outfit, so we will have to wait to see if this huge shift in the race is confirmed or if this poll is just an outlier.

The average of live-caller polls shows Biden leads with 31% followed by Warren at 18% and Sanders at 13%.

Politico: “On Sunday, Warren stood on the biggest stage of her presidential campaign for a rally here that drew an estimated 15,000 people — eclipsing an estimated 12,000-person event she held in Minnesota earlier in the week… Across the country in New Hampshire, Biden presided over a series of intimate, subdued events in New Hampshire and Iowa, hosting crowds that numbered in the low hundreds.”

“The parallel displays by two of the three leading Democratic candidates offered a possible preview of the collision course looming if Biden and Warren maintain their current trajectory. It would be a clash of opposites: the progressive firebrand against the establishment favorite; the cerebral candidate of big, bold plans vs. the elder statesman offering himself as a safe haven for people who simply want a return to pre-Trump normalcy.”

The New York Times has an interesting piece on how Sen. Elizabeth Warren is telling Democratic insiders she’s not a threat.

Said Warren at a recent fundraiser: “Last year, I was running for re-election, but I didn’t hold back. In fact, I raised or gave more than $11 million helping get Democrats elected up and down the ballot around the country” and “sent contributions to all 50 state parties, the national committees and the redistricting fight.”

“Her point was easy to grasp: While her liberal agenda may be further left than some in the Democratic establishment would prefer, she is a team player who is seeking to lead the party — not stage a hostile takeover of it.”

“As Ms. Warren steadily rises in the polls she is working diligently to protect her left flank… Yet publicly, and even more in private, she is signaling to party leaders that, far from wanting to stage a ‘political revolution’ in the fashion of Mr. Sanders, she wants to revive the beleaguered Democratic National Committee and help recapture the Senate while retaining the House in 2020.”

The Atlantic: “Joe Biden is ostensibly the candidate of the Democratic establishment. But it was Elizabeth Warren—who’s built her career on trying to challenge the status quo—who spent the weekend wowing party insiders.”

“At this point in Warren’s campaign, it’s not a surprise anymore when she spends hours working a ‘selfie line’ after a major event, as she did following two massive rallies she’s held in the past week. But it was a surprise when more than 150 of the Democratic Party’s biggest donors similarly lined up on Thursday night after her speech at a dinner here—and it struck even some of the Democrats waiting to take photos with her.”

Said one attendee: “These are people who should not like her. And they love her.”

“It’s August 2019 and the presidential campaign is already taking on the frenetic pace of a contest in its final months.”

“Driven by a contest that’s widely expected to draw record voter turnout, political operatives and volunteers from both parties have begun diligently ramping up their electoral efforts — dead set on gaining an advantage in the key 2020 general election battlegrounds of Wisconsin, Michigan, Pennsylvania and Florida.”

Associated Press: “With 435 days until the next presidential election, the Democrats seeking to oust Trump are bracing for the nastiest contest in the modern era, one that will almost certainly tear at the moral and cultural fabric of a deeply divided nation.”

“Knowing what lies ahead once their own divisive primary is decided, Democrats are confronting a critical question: Just how low should they go to push back against Trump?”

“Political strategists and recent history suggest there may be more risk than reward for candidates wishing to fight Trump on his terms. But Democratic primary voters, energized and enraged by Trump’s turbulent presidency, are increasingly calling for the candidates to fight fire with fire.”

Dan McLaughlin: “Will Donald Trump’s reelection campaign be a nail-biter? No Republican president has ever been reelected with less than 50 percent of the vote. Historically, when a president runs for reelection, it usually isn’t close. Of the 31 times in U.S. history that a sitting president ran for reelection, 19 of those were blowouts: 15 easy wins, 4 lopsided losses. Among the other 12, nearly half offered very little real suspense at the end.”

Noah Feldman: “A federal appeals court has held that members of the Electoral College have a constitutional right to vote for a different presidential candidate than the one they swore to support — and whom the voting public in their states actually chose.”

“Inventing a right to be a faithless elector invites chaos, elevates formalism over democracy, and shows how indefensible originalism is when applied to evolving norms of democracy.”

“The issue will probably have to go to the U.S. Supreme Court. We can only hope the justices apply common sense and take into account that the point of modern presidential elections is to elect the people’s preferred candidate.”

Nate Silver: “Biden gets 30 percent of the vote among Democrats who say they’re paying ‘a lot’ of attention to the campaign, essentially the same as the 29 percent support he has from Democrats overall in Quinnipiac’s polling. Warren and Kamala Harris do gain some ground among the most attentive voters — while Sanders loses some ground. But still, Biden tops the field among voters in that category.”

“If you look at polls of Iowa, though, you see more evidence of an actual enthusiasm deficit for Biden.”

“Biden may already be trailing in Iowa, in fact. Among the last seven polls there — everything since the first debate in Miami — three have shown Biden leads, but two have had Warren ahead, along with one Biden/Warren tie and one Buttigieg lead. If you combine those top-line polls with the enthusiasm numbers, plus Warren’s strong ground game in Iowa, you can argue that the state is Warren’s to lose more than Biden’s.”

Rep. Joe Kennedy III (D-MA) confirmed in a Facebook post that he’s considering a bid for a U.S. Senate seat in Massachusetts.

Said Kennedy: “Over the past few weeks I’ve begun to consider a run for the U.S. Senate. This isn’t a decision I’m approaching lightly and — to be completely candid — I wasn’t expecting to share my thoughts so soon.”

Rep. Sean Duffy (R-WI) announced he was resigning from Congress after being elected to his fifth term in 2018, Politico reports. Duffy will step down on September 23 due to health complications with his unborn baby.

Without a quorum, the agency will no longer be able to hold meetings, initiate audits and vote on enforcement actions.