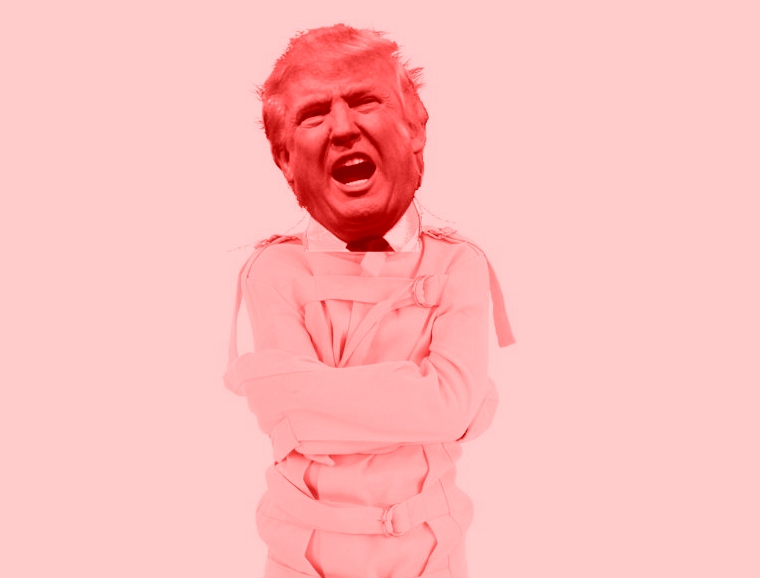 Yesterday, Trump proclaimed himself the King of Israel, that he was the Chosen One, that he was going to revoke birthright citizenship and detain migrant families indefinitely. And that was before noon. Let’s document the atrocities.

First, “the Trump administration announced a new rule on Wednesday that would allow migrant families to be kept in detention centers long-term,” Axios reports. “A decades-old court decision — the Flores agreement — has prevented the government from holding minors in detention for longer than 20 days. The new regulation would replace that and give the federal government more power in determining how to care for migrant minors in its custody. The rule was first proposed following the family separation crisis last spring, and is certain to face legal challenges.”

Second, President Trump said his life would be easier if he had not mounted a trade war with China but said “I am the chosen one” to take on Beijing, Reuters reports. He added: “Somebody had to do it, so I’m taking on China. I’m taking on China on trade, and you know what? We’re winning.”

CNBC: “The president’s self-aggrandizing remark followed a string of criticisms aimed at his predecessors, whom he claimed had ignored China’s alleged malpractice on trade.”

Third, Trump tweeted a quote in which he was described as the “King of Israel” and “the second coming of God.”

Fourth, Trump said his administration is once again seriously considering an executive order to end birthright citizenship months after several lawmakers cast doubt on his ability to take such action. Yeah, you cannot explicitly amend the Constitution with an executive order, not when the text in the Constitution is so fucking explicit. People born in this country are fucking citizens of this country, no matter their parent’s origins. End of fucking story.

Finally, President Trump claimed that he sought to give himself a Medal of Honor, “but decided not to after being counseled against the move by aides,” Politico reports.

“Danish lawmakers on Wednesday reacted in fury to President’s Trump’s postponement of his two-day visit in early September to Denmark after its prime minister said she was not interested in selling him the autonomous island of Greenland,” the Washington Post reports.

“Parliamentarians and former government ministers slammed the president’s behavior as juvenile, undiplomatic and insulting, though the government itself has yet to comment on the visit’s cancellation and instead scheduled a news conference for the afternoon.”

President Trump defended his decision to postpone a state visit to Denmark, accusing the country’s prime minister of making a “nasty and inappropriate statement” in rejecting his desire to discuss possibly purchasing Greenland, The Hill reports.

Said Trump: “I thought it was a very not nice way of saying something. They could have just told me no. All they had to say was we’d rather not do that. Don’t say, what an absurd idea that would be.”

I guess Trump would not say it was absurd if Putin wanted to buy Alaska back, because that wouldn’t be polite. But I detect a pattern. When women in leadership oppose him, or tell him no, they are nasty.

“It shows why we now more than ever should consider European Union countries as our closest allies. The man is unpredictable. Reality surpasses imagination.” — Morten Ostergaard, leader of the Danish Social Liberal Party, quoted by Reuters, on President Trump canceling his visit to Denmark.

“I mean, we’re liable to wake up one morning and Donald, if he were president, would have nuked Denmark.” — Sen. Ted Cruz (R-TX) during the 2016 presidential campaign, quoted by New York magazine.

James Hohmann: “These erratic, contradictory pronouncements induce whiplash. They’re also de rigueur in this administration. This is a feature, not a bug, of Trumpism. During his first 928 days in office, Trump made more than 12,000 demonstrably false or misleading claims. Our Fact Checker has documented them in a database… There are dozens of separate examples of the president’s spokespeople – predating Gidley and Grisham – saying something adamantly, only to have the president cut their legs out from under them later in the day. Why would you take anything they or the president say at face value?”

“This behavior is riskier in challenging economic times. When the business cycle turns, the wherewithal of our system depends on people having as much confidence and certainty as possible. Trump and his White House flacks inspire neither feelings of confidence nor certainty. Trump’s penchant for contradicting himself and his aides, as well as changing his mind hastily, which together fuel the credibility gap, would be problematic in a financial crisis. Investors want a steady hand on the ship of state’s tiller. That’s how you prevent runs on the banks, freefalls in the stock market and freezes in business investment.”

First Read says President Trump’s cancellation of his trip to Denmark over them not being willing to sell Greenland shows the president’s “behavior in office isn’t getting better. Instead, it’s getting worse. This is no way to run a country. Or to talk about its citizens. Or to treat an American ally. Everyone who works in Washington knows this. Staff members at the White House know this. Top officials inside the Republican Party know this.”

President Trump shared a quote from a right-wing radio host who said Jews in Israel view Trump as “the King of Israel” and “the second coming of God.”

Cindy McCain told ABC News that no one in the Republican Party has become the party’s “voice of reason” after her husband’s death last year.

“The student activists who crashed the political arena after the mass shooting last year at their high school in Parkland, Fla., are throwing their weight behind a new and ambitious gun-control program that they hope will set the tone for the debate following the most recent mass shootings and headed into the 2020 elections,” the Washington Post reports.

Axios has highlights of the proposal.

President Trump said that the United States already has “very strong background checks” for gun purchasers and that officials need to be wary of the prospect of a “slippery slope” where “everything gets taken away,” The Hill reports.

Trump’s comments provided more evidence that he is backtracking after initially expressing support for enhanced background checks following a pair of mass shootings that killed 31 people earlier this month.

But then he flip flopped flipped again and offered what appeared to be yet another pivot in his views on gun control measures, saying the nation’s background check system is “already strong” but that he has “an appetite” for plugging loopholes in the federal process, Politico reports.

“In the weeks since back-to-back mass shootings, Trump has waffled on strengthening background checks, at first offering gun control advocates hope that he would ignore the protests of the gun lobby and push the issue before apparently retreating over the weekend.”

The CBO says federal deficits are projected to grow much more than expected over the next decade thanks to the two-year budget agreement lawmakers and the White House struck last month, the Wall Street Journal reports.

“The agency increased its forecasts for deficits over the next decade by $809 billion, to $12.2 trillion… The increase primarily reflects higher federal spending under the new budget deal, partly offset by lower projected interest rates.”

New York Times: “Over the last year, dozens of advertisers, including Pacific Life, Farmers Insurance and SodaStream, have distanced themselves from Mr. Carlson, the host who caused an uproar with his recent on-air comments on white supremacy days after the mass shooting in El Paso. In the past two weeks, smaller companies, like the meditation app Calm and the online lending start-up SoFi, joined them.”

“The Monday episode of Tucker Carlson Tonight, the host’s first since he left the airwaves for what Fox News said was a planned vacation two days after making the remarks on white supremacy, had fewer commercials than usual.”

Angry drivers have been following buses full of migrant children on their way to education programs in Idaho, the Idaho Statesman reports.

“The Community Council of Idaho plans to remove and conceal signage on buses they use to transport local children of farmworkers and Head Start participants, after repeated experiences of harassment from motorists across the state… The staff said they assume the drivers are harassing the buses — labeled ‘Migrant and Seasonal Head Start’ — because they assume that migrant means undocumented.”

President Trump said “he wasn’t currently looking at any form of tax cuts, a reversal from a day earlier when he floated possible moves to bolster economic growth,” the Wall Street Journal reports. Said Trump: “I’m not looking at a tax cut now. We don’t need it. We have a strong economy.”

“The Trump administration is considering a new policy that would allow state and local jurisdictions to deny entry to refugees who have been approved for resettlement in the United States,” NBC News reports.