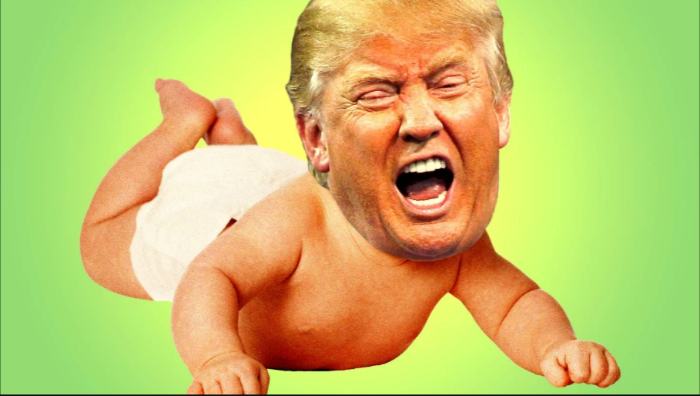 President Trump announced he was postponing a planned meeting with the prime minister of Denmark after she shot down his talk of possibly purchasing Greenland, an autonomous Danish territory, The Hill reports.

Said Trump: “Denmark is a very special country with incredible people, but based on Prime Minister Mette Frederiksen’s comments, that she would have no interest in discussing the purchase of Greenland, I will be postponing our meeting scheduled in two weeks for another time. The Prime Minister was able to save a great deal of expense and effort for both the United States and Denmark by being so direct.”

All the Prime Minister said was that she would not discuss the sale of Greenland at this meeting with Trump. So he is having a literal temper tantrum at being denied the toy he wants.

“United States Steel Corp will temporarily lay off hundreds of workers at its Great Lakes facility in Michigan in coming weeks,” Reuters reports.

“U.S. Steel said the lay-offs at the Michigan plant could last beyond six months. They will impact nearly every area of the facility, from blast furnace to finishing operations.”

“The White House is examining proposals to bolster the economy amid warning signs of a slowdown, even as President Trump and top officials project confidence that a recession isn’t on the horizon,” the Wall Street Journal reports.

“President Trump on Tuesday confirmed that he is considering a temporary payroll tax cut amid mounting concerns about an economic slowdown,” the Washington Post reports. “The White House had previously disputed that a payroll tax was under consideration.”

But wait, Mr. President, I thought you said there would be no recession. So why are considering measures to alleviate the Trump Recession?

It gets better: “In public, President Trump and top White House officials keep extolling the strength of the U.S. economy. In private, they’re increasingly worrying about a global economic slowdown triggering a U.S. recession — and weighing options to shore up the economy in an election year,” Politico reports.

“At a fundraising luncheon this week in Jackson, Wyo., headlined by Jared Kushner and Ivanka Trump, acting White House chief of staff Mick Mulvaney acknowledged the risks to the GOP elite behind closed doors. If the U.S. hypothetically were to face a recession it would be ‘moderate and short,’ Mulvaney told roughly 50 donors, according to an attendee.”

Wall Street Journal: “Shipments of recreational vehicles to dealers have fallen about 20% so far this year, after a 4.1% drop last year, according to data from the RV Industry Association. Multiyear drops in shipments have preceded the last three recessions.”

This nugget was buried in a story from The Hill about the House Ways and Means Committee asking a federal judge to force the IRS to comply with subpoenas for six years of the president’s federal tax returns:

“The committee revealed in its new court filings that on July 29, it received an unsolicited communication from a federal employee it claims made credible allegations of possibly inappropriate efforts to influence the IRS’s mandatory audit program of presidents.”

Susan Glasser: “Pompeo, an evangelical Christian who keeps an open Bible on his desk, now says it’s possible that God raised up Trump as a modern Queen Esther, the Biblical figure who convinced the King of Persia to spare the Jewish people. He defines his own job as serving the President, whatever the President asks of him… No matter what Trump has said or done, Pompeo has stood by him.”

Said one former senior White House official: “There will never be any daylight publicly between him and Trump.”

Said a former American ambassador: “He’s like a heat-seeking missile for Trump’s ass.”

“Pompeo’s transformation reflects the larger story of how the Republican Party went from disdaining Trump to embracing him with barely a murmur of dissent.”

Jonathan Swan: “President Trump has suggested to national security officials that the U.S. should station Navy ships along the Venezuelan coastline to prevent goods from coming in and out of the country.”

“Trump has been raising the idea of a naval blockade periodically for at least a year and a half, and as recently as several weeks ago, these officials said. They added that to their knowledge the Pentagon hasn’t taken this extreme idea seriously, in part because senior officials believe it’s impractical, has no legal basis and would suck resources from a Navy that is already stretched to counter China and Iran.”

President Trump called National Rifle Association CEO Wayne LaPierre to tell him that universal background checks for gun purchases are off the table, The Atlantic reports.

In the call, Trump said he instead wanted to focus now on “increasing funding” for mental-health care and directing attorneys general across the country to start prosecuting “gun crime” through federal firearms charges from the Justice Department.

Said one White House aide: “The only worry now… is that once Congress returns from recess and talk of gun-control legislation restarts, Trump will change his mind yet again.”

Business Insider: “A Verdant Labs analysis of Federal Elections Commission data found that nearly three-quarters of truck drivers are Republican — one of the most conservative jobs in America, along with surgeons and farmers. And truck drivers supported Trump in droves, according to an Overdrive magazine survey from 2016. About 75% said they planned to vote for Trump, up from 66% who supported Sen. Mitt Romney, the Republican presidential nominee in 2012.”

“But a sharp downturn in the trucking industry and a slew of tax changes have hampered their ability to make a living. And many connect those two trends to Trump’s economic policies.”

“Italian Premier Giuseppe Conte has told senators he is handing in his resignation because his right-wing coalition partner, the League party led by Interior Minister Matteo Salvini, has decided to yank its support for the populist government,” the AP reports.

“Conte said he will go later Tuesday to officially inform Italian President Sergio Mattarella of his decision. Mattarella, as head of state, could ask Conte to stay on and try to find an alternative majority in Parliament, or accept his resignation and see if some other leader can forge an alternative coalition.”

“The U.S. won’t be vaccinating migrant families in holding centers ahead of this year’s flu season, despite calls from doctors to boost efforts to fight the infection that’s killed at least three children at detention facilities in the past year,” CNBC reports.

New York Times: “The White House, blindsided by a pact between California and four automakers to oppose President Trump’s auto emissions rollbacks, has mounted an effort to prevent any more from joining the other side… But even as the White House was working to do this, it was losing ground. Yet another company, Mercedes-Benz, is preparing to join the California agreement.”

“Mr. Trump, described by three people as ‘enraged’ by California’s deal, has also demanded that his staffers step up the pace to complete his plan. His proposal, however, is directly at odds with the wishes of many automakers… The administration’s efforts to weaken the Obama-era pollution rules could be rendered irrelevant if too many automakers join California in opposition before the Trump plan can be put into effect. That could imperil one of Mr. Trump’s most far-reaching rollbacks of climate-change policies.”

“President Trump ordered cabinet members on Monday to stem the tide of rising anger in Iowa and other Farm Belt states over his administration’s decision to allow numerous oil refiners to mix less ethanol into their gasoline,” Reuters reports.

“About a week ago, the administration granted 31 exemptions from the nation’s biofuel laws to 31 refineries.”

Jonathan Chait: “The professions of confidence by Trump and his supporters that no recession is at hand is belied by their own behavior — especially Trump’s frantic attempts to pressure the Federal Reserve into loosening its monetary policy, along with the president’s renewed interest in cutting payroll taxes as stimulus. It’s also belied by a fair amount of data.”

“But more curious than the right’s insistence that a recession won’t occur is its certainty that Democrats — working through their agents in the Fake News, naturally — are engineering one. Why would the right imagine such sinister motives? Perhaps the answer is that this is precisely how Republicans behaved in the opposition.”

“After Obama took office, the entire Republican legislative calculus revolved around the premise that Republicans were engaged in zero-sum competition — anything that helped Obama pass a stimulus bill hurt their party… Throughout Obama’s presidency, Republicans not only demanded contractionary fiscal and monetary policy but staged a series of dangerous showdowns in order to force Obama to accept it.”

“President Trump has filed financial disclosure statements that appear to misstate the value and profitability of his Scotland golf courses by $165 million, possibly violating federal laws that are punishable by jail time,” the HuffPost reports.

“Trump claimed in his 2018 U.S. filing that his Turnberry and Aberdeen resorts were each worth more than $50 million. For that same time period, he filed balance sheets with the United Kingdom government showing that their combined debt exceeded their assets by 47.9 million British pounds ― the equivalent of $64.8 million at the exchange rate on Dec. 31, 2017, the date of the last U.K. filing available.”

Eugene Robinson: “The astonishing thing is that the president of the United States is, let’s face it, raving like a lunatic — and everyone just shrugs.”

“The nation is still reeling from two mass shootings. The financial markets are yo-yoing by hundreds of points. A bomb in Afghanistan, where we’re still at war, killed 63 revelers at a wedding. Tension between the United States and Iran continues to mount. North Korea keeps testing new missiles. India is playing with fire in Kashmir. Hong Kong has been convulsed for months by massive protests seeking to guarantee basic freedoms.”

“And Trump obsesses about buying Greenland.”

“The truth is that we don’t have an actual presidency right now. We have a tiresome reality show whose ratings have begun to slide — and whose fading star sees cancellation on the way.”