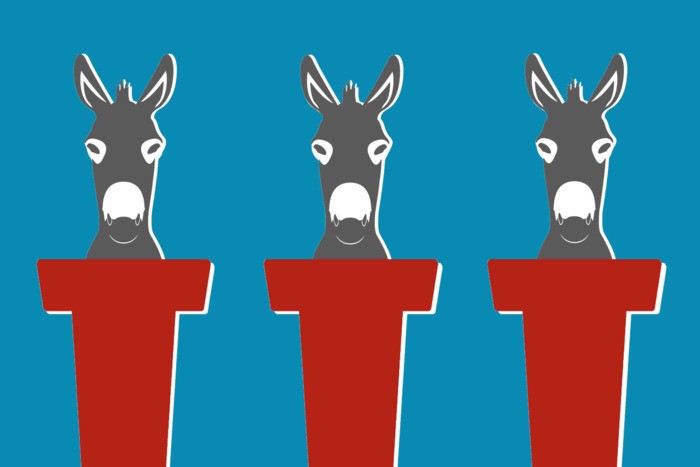 A new CNN poll finds 65% of Americans say current economic conditions are good, but that’s down since May, representing the first significant decline in public perception of the economy during Donald Trump’s presidency.

Chicago Tribune: “Pete Buttigieg held a self-described grassroots campaign rally in Bronzeville on Tuesday night, but the overwhelmingly white audience he drew to the event in a historic black neighborhood reinforced the difficulty the Democratic presidential hopeful has had in connecting with African American voters.”

“Buttigieg did not acknowledge the makeup of the audience in his remarks or in answering questions from the 1,000 people at the sold-out event, but did touch on it briefly as he closed the hourlong rally with a plea for his supporters.”

Said Buttigieg: “Find the people who don’t look like most of you in this room and let them know they have the chance, not just to support this campaign, but to shape it.”

Associated Press: “Money is pouring into Maine’s high-profile Senate race, threatening to upend the state’s reputation for genteel politics and giving way to a new era of partisanship.”

“Advertising data shows Democrats plan to spend at least $1.2 million on ads through December, including a spot that aired for the first time this month that accuses Collins of failing to protect Medicare. A newly formed GOP group, meanwhile, has $800,000 already in the bank, thanks to a small group of wealthy financiers.”

Washington Post: “The anti-Trump movement inside the Republican Party — long a political wasteland — is feeling new urgency to mount a credible opposition to Trump before it’s too late. With state deadlines for nominating contests rapidly approaching in the fall, potential candidates face pressure to decide on running within the next few weeks. So far, only former Massachusetts governor Bill Weld has declared that he is running, but he has struggled to gain traction.”

“Republicans considering bids, as well as those trying to draft other candidates, acknowledge that defeating Trump appears to be nearly impossible but argue that a recession or an unforeseen change in the political climate could weaken him enough to make a primary challenge more than a Never Trump fantasy.”

“President Trump’s reelection campaign will dispatch more than a dozen female surrogates on Thursday to some of the most important 2020 battleground states in its first major push to mobilize suburban women — a critical voting bloc that revolted against Republican candidates as recently as the midterm elections last fall,” Politico reports.

“Campaign officials have billed the cross-country events as both a celebration of women’s suffrage — Sunday marks the 99th anniversary of the adoption of the 19th Amendment, granting women the right to vote — and a coordinated effort to train pro-Trump women to become effective volunteers in their communities.”

“All three are suddenly running ads on the air in Iowa, signaling both a new, quicker pace in the race for the 2020 Democratic presidential nomination and what Democratic insiders say is a need to check the formidable ground game of Massachusetts Sen. Elizabeth Warren.”

“Colorado’s presidential electors do not have to vote for the candidate who wins the state’s popular vote, the powerful 10th U.S. Circuit Court of Appeals in Denver ruled, a decision that could have major ramifications for future elections,” the Colorado Sun reports.

“A three-judge panel on the federal appellate court ruled 2-1 against the Colorado Secretary of State’s Office in a case dating back to the 2016 presidential election, when three of the state’s nine presidential electors — the state’s Electoral College voice — tried to vote for candidates other than Democrat Hillary Clinton, who won handily in the state.”

Secretary of State Mike Pompeo told the Washington Examiner that he will not run for the open U.S. Senate seat in Kansas next year. Said Pompeo: “I am going to stay here. There’s lots of people talking about it. The only one who’s not talking about it is me.”