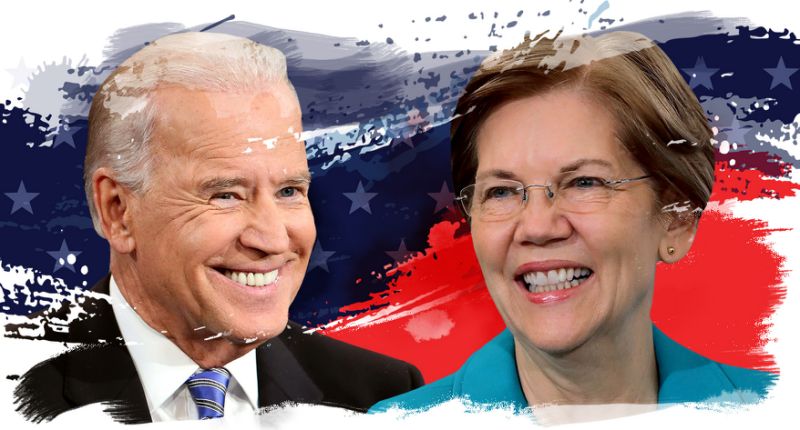 A new Economist/YouGov poll found 65% of Democratic voters said Joe Biden would “probably beat Donald Trump” — unchanged from June. But the number saying the same thing about Elizabeth Warren jumped 14 points since then, to 57%, the highest of any other candidate.

In the overall race, Biden led Warren by just 1 point among Democrats in a match-up with Trump. That’s after being 16 points ahead of her in June, according to the poll.

Speaker Nancy Pelosi said the U.S.-Israel relationship can withstand the “weakness” of President Trump and Prime Minister Benjamin Netanyahu, who shook diplomatic norms this week in barring two members of Congress from visiting the country, the AP reports.

Said Pelosi: “We have a deep relationship and long-standing relationship with Israel that can withstand Donald Trump and Benjamin Netanyahu. We cannot let their weaknesses stand in the way of our ongoing relationship.”

I am not sure it should survive Trump. Not without significant changes to current Israeli government policy. Severe punishment is due the Likud Government. That’s the consequence for them so blatantly siding with one political party in the United States. When the opposition, i.e. the Democrats, come back into power, there are prices to be paid. And that price is so long as the Likud government remains in power, pursuing a one state apartheid solution, it should not be the recipient of American tax dollars.

Tom Friedman: “I am going to say this as simply and clearly as I can: If you’re an American Jew and you’re planning on voting for Donald Trump because you think he is pro-Israel, you’re a damn fool.”

“Trump’s way of — and motivation for — expressing his affection for Israel is guided by his political desire to improve his re-election chances by depicting the entire Republican Party as pro-Israel and the entire Democratic Party as anti-Israel.”

“As a result, Trump — with the knowing help of Israel’s current prime minister, Benjamin Netanyahu — is doing something no American president and Israeli prime minister have done before: They’re making support for Israel a wedge issue in American politics.”

Former Rep. Dave Trott (R-MI) told CNN that he thinks he knows what President Trump is talking about when he says he won Michigan’s “Man of the Year” award.

“He had invited Trump in 2013 to be the keynote speaker at the Oakland County Republican Party’s Lincoln Day Dinner in Michigan. At the event, Trott presented Trump with a tie, a statuette of Abraham Lincoln and a framed copy of President Lincoln’s Gettysburg Address. But Trott says there was no man of the year award.”

Trump gave a “rambling speech touching every topic under the sun” but didn’t receive any awards.

Former vice president Dick Cheney and his daughter, Rep. Liz Cheney (R-WY), are to appear at a lunch fundraiser Monday in support of President Trump’s 2020 reelection campaign and the Republican National Committee, the Washington Post reports.

Dan Balz: “After a week in which the threat of recession rocked global financial markets, his trade war with China showed no signs of progress and the government of Israel got into a nasty dispute with two members of Congress, President Trump went to bed Thursday night with other weighty issues on his mind.”

He tweeted: “Great news. Tonight we broke the all-time attendance record previously held by Elton John at #SNHUArena in Manchester!”

“This is the frivolous mindset of the president of the United States. His flurry of statements over the past few days have brought into focus once again something fundamental about the president: He has little understanding of what it means to govern. He would rather tweet from the bleachers.”

Daily Beast: “On one side, there’s the Congressional Black Caucus, the preeminent group of African-American power brokers representing their districts in Washington. On the other, rank-and-file black voters across the country. And in a field with nearly two dozen contenders, only two candidates are overwhelmingly leading in either camp.”

“Former Vice President Joe Biden is ahead by every conceivable national metric with black voters, a critical demographic essential to winning the Democratic nomination in 2020. But he has a direct competitor for support among Washington’s influential political class in Sen. Kamala Harris (D-CA), the only black woman competing for the White House who edged ahead of him this week with endorsements from the CBC.”

Neil Irwin: “So if there’s going to be a recession in 2020 — if the pessimistic signals in the financial markets prove correct — how would it happen? There are plenty of clues, in the details of recent economic reports, in signals from the markets, and in the recent history of recessions and near recessions.”

“President Trump’s on-again-off-again execution of the trade war with China and other countries has fed uncertainty into businesses’ decision-making. Corporate investment spending is softening, despite the big tax cut that Mr. Trump said would boost it. And the combination of central banks that are at the outer limits of their ability to stimulate growth, and an inward turn by many countries, could make governments less effective at responding to a downturn.”

The Hill: “Comedian Bill Maher on Friday continued his calls for another economic recession, claiming it would tank President Trump’s shot at reelection in 2020 and be ‘very worth’ ending his policies.”

New York Times: “The story of Mr. Miller’s rise has been told with a focus on his pugnacity and paradoxes. Known more for his enemies than his friends, he is a conservative firebrand from liberal Santa Monica, Calif., and a descendant of refugees who is seeking to eliminate refugee programs. He is a Duke graduate in bespoke suits who rails against the perfidy of so-called elites. Among those who have questioned his moral fitness are his uncle, his childhood rabbi and 3,400 fellow Duke alumni.”

“Less attention has been paid to the forces that have abetted his rise and eroded Republican support for immigration — forces Mr. Miller has personified and advanced in a career unusually reflective of its times.”

“As President Trump’s trade advisers were searching last week for a strategy to forestall his threatened tariffs on China, they struck upon a novel approach: appeal to his Christmas cheer,” CNN reports.

“Under pressure from retailers to prevent a move that would likely have caused prices of popular consumer goods to spike, the President’s team came to him during a meeting last week with a warning. Applying new tariffs on all Chinese imports, they cautioned, could effectively ‘ruin Christmas,’ according to people familiar with the matter.”

“It was a tactic that worked: Trump announced the tariffs would be delayed until December 15.”

“Such a race could substantially alter the state’s political landscape and has the potential to elevate a fourth member of a Democratic dynasty to the Senate.”

“A contest between the two Massachusetts lawmakers could become the nation’s most high-profile primary race and would represent another test of the Democratic Party’s old guard. And while Mr. Kennedy and Mr. Markey are both committed progressives, the race would amount to a generational showdown between a scion of the state’s most famous family and a more than four-decade-long fixture of Massachusetts politics.”

Associated Press: “The dispute threatens to complicate Bevin’s efforts to win a second term in a state that has tilted heavily toward the GOP.”

New York Times: “Jeffrey Epstein, inmate 76318-054, hated his cell at the Metropolitan Correctional Center. It was cramped, dank and infested with vermin, so Mr. Epstein, long accustomed to using his wealth to play by his own rules, devised a way out. He paid numerous lawyers to visit the jail for as many as 12 hours a day, giving him the right to see them in a private meeting room. Mr. Epstein was there for so long that he often appeared bored, sitting in silence with his lawyers, according to people who saw the meetings. While they were there, he and his entourage regularly emptied the two vending machines of drinks and snacks.”

“Outside the meeting room, Mr. Epstein mounted a strategy to avoid being preyed upon by other inmates: He deposited money in their commissary accounts.”

“But in his final days, Mr. Epstein’s efforts to lessen the misery of incarceration seemed to be faltering. He was seldom bathing, his hair and beard were unkempt and he was sleeping on the floor of his cell instead of on his bunk bed, according to people at the jail.”