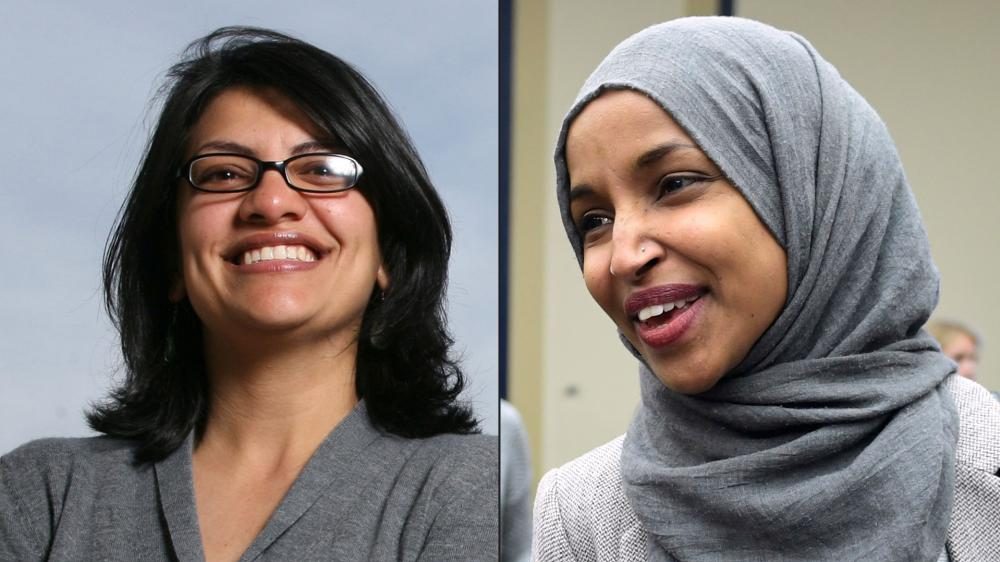 President Trump said Israel should not allow two U.S. congresswomen with whom he has feuded to enter the country for an upcoming trip to Israel and the Palestinian Territories, The Hill reports.

Tweeted Trump: “It would show great weakness if Israel allowed Rep. Omar and Rep. Tlaib to visit. They hate Israel and all Jewish people, and there is nothing that can be said or done to change their minds. Minnesota and Michigan will have a hard time putting them back in office. They are a disgrace!”

“Mr. Trump’s intervention was an extraordinary step to influence an allied nation and punish his political opponents at home. Israel’s decision to bar the two congresswomen, Reps. Rashida Tlaib (D-MI) and Ilhan Omar (D-MN), was widely criticized, including by prominent Israel supporters.”

Israeli journalist Barak Ravid: “I want to tell you a secret: A month ago when Netanyahu decided to allow Omar and Tlaib into the country they already supported BDS and he knew it back then. There is only one reason for Netanyahu’s backtracking today — the pressure from Donald Trump.”

New York Times: “Mr. Trump’s decision to recommend that another country block entry to two United States citizens, let alone members of Congress, was one of the most pronounced violations of democratic norms that he has engaged in since taking office in January 2017.”

Israel will now have to expect retribution for this extremely shortsighted and destructive decision once Trump is no longer President. Netanyahu, if he is not jailed by then for his corruption, would likely be barred from returning to the United States in any capacity. Further, the next Democratic President must give Israel an ultimatum: 1) Revert to the 1967 borders and give Palestinians full statehood on the restored West Bank and Gaza with no blockades; or 2) Incorporate the West Bank and Gaza into Israel, giving all residents therein full and equal Israeli citizenship, including the right to worship Islam and the right to vote in all Israeli elections. Failure to do one or the other will result in loss of all American aid and assistance within one year, forever.

New York Times: “What President Trump has not done yet is the kind of arm-twisting of Republican senators wary of gun control legislation that will be necessary to force a bill through Congress, according to interviews with White House officials and congressional aides. He has shown no interest so far in a major address to ensure that public opinion is behind such a move. And he and his aides have yet to settle on what he will actually propose.”

“But they have commissioned a poll through his campaign to assess where his supporters are on different gun control measures, and they will have the results by September, when the Senate returns from summer recess, according to three people briefed on the plans.”

“Until that happens, the discussion inside the White House about what, if anything, to do about new gun measures — and Senator Mitch McConnell, the majority leader, has warned that it will have to be the president who calls Republicans to action — is largely theoretical.”

“President Trump made his name on the world’s most famous island. Now he wants to buy the world’s biggest,” the Wall Street Journal reports.

“The idea of the U.S. purchasing Greenland has captured the former real-estate developer’s imagination, according to people familiar with the deliberations, who said Mr. Trump has, with varying degrees of seriousness, repeatedly expressed interest in buying the ice-covered autonomous Danish territory between the North Atlantic and Arctic oceans.”

“Some of his advisers have supported the concept, saying it was a good economic play… while others dismissed it as a fleeting fascination that will never come to fruition. It is also unclear how the U.S. would go about acquiring Greenland even if the effort was serious.”

“The former adviser to first lady Melania Trump, who has come under fire for the cost of President Trump’s inauguration, was among the event planners who raised concerns about excessive spending in the weeks before the events,” according to documents obtained by CNN.

“Stephanie Winston Wolkoff, a former friend of Melania Trump, has emerged as a witness for investigators and received a subpoena last month by Washington DC’s attorney general.”

“China on Thursday threatened retaliation if Washington steps up their war over trade and technology by going ahead with planned Sept. 1 tariff hikes on additional Chinese imports,” the AP reports.

“Beijing will take unspecified ‘necessary countermeasures,’ the Cabinet said. It gave no details. President Donald Trump has said he plans to impose 10% duties on an additional $300 billion of Chinese imports.”

“The Chinese announcement made no mention of Trump’s decision Wednesday to postpone penalties on about 60% of those goods until December.”

“Jeremy Corbyn, leader of the U.K.’s opposition Labour Party, asked rival parties to support him as prime minister in a coalition to block Boris Johnson’s government from pursuing a no-deal Brexit,” Bloombergreports.

“Corbyn wrote to other political parties’ leaders and rebels in the Conservative Party Wednesday, seeking support in a vote of no confidence in the government. He said that if that was successful, they should make him caretaker prime minister so he could delay Brexit and call a general election.”

El Paso Mayor Dee Margo (R) told President Trump in a private meeting that he’s presenting “misinformation” about crime in his city, and pushed back when the president used a derogatory term to suggest he wasn’t a real Republican, PBS reports.

Said Margo: “He said, ‘You’re a RINO ’ and I said, ‘No, sir. I am not a RINO.’ I said… ‘I simply corrected the misinformation you were given by [the Texas] attorney general, and that’s all I did.’”

“The mayor said he was trying to debunk Trump’s false claim that El Paso had one of the highest violent crime rates in the U.S. until a barrier fence — the bulk of which was completed in 2009 — was built there.”

“Now, Trump appears to have backed off his plans to commute Blagojevich’s sentence.”

“President Trump sought to take credit Tuesday for a major manufacturing complex in western Pennsylvania in his latest effort to reinvigorate the Rust Belt support that sent him to the White House. He was cheered on by fluorescent-vest-clad workers who were paid to attend by Shell, their employer, which is building the facility,” the AP reports.

Said Trump: “This would have never happened without me and us.”

“Despite Trump’s claims, Shell announced its plans to build the complex in 2012, midway through President Barack Obama’s term in the White House.”

“In Mr. Trump, I see the worst and ugliest iteration of views I expressed for the better part of a decade. To be sure, I’ve had my share of controversy. On more than one occasion, I questioned Mr. Obama’s truthfulness about his religion. At times, I expressed hate for my political opponents. We now see where this can lead. There’s no place in our politics for personal attacks like that, and I regret making them.”

“I didn’t vote for Mr. Trump in 2016 because I liked him. I voted for him because he wasn’t Hillary Clinton. Once he was elected, I gave him a fair hearing, and tried to give him the benefit of the doubt. But I soon realized that I couldn’t support him because of the danger he poses to the country, especially the division he sows at every chance, culminating a few weeks ago in his ugly, racist attack on four minority congresswomen.”

“The fact is, Mr. Trump is a racial arsonist who encourages bigotry and xenophobia to rouse his base and advance his electoral prospects. In this, he inspires imitators.”

CNN: “White House officials have been engaged in preliminary discussions about invoking executive privilege to limit Lewandowski from complying with a congressional subpoena, despite Lewandowski never serving in any role in the administration”

“The President also, he’s so accessible, so right now I think that’s good enough,” she said to Sinclair’s Eric Bolling in a segment of “America This Week,” adding that “I don’t know what any of the press could complain about.”