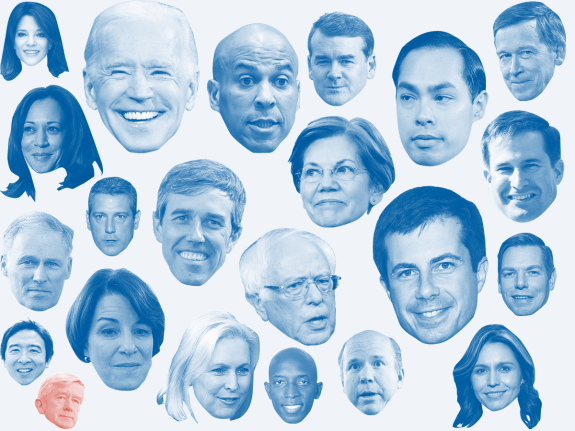 A new Charleston Post & Courier poll in South Carolina finds Joe Biden leading the Democratic field with 36%, followed by Elizabeth Warren at 17%, Bernie Sanders at 16%, Kamala Harris at 12%, Pete Buttigieg at 5% and Cory Booker at 4%.

“In the wake of two mass shootings, overwhelming and bipartisan majorities of voters favor background checks on gun buyers and taking guns from people who are a danger to themselves or others,” according to the latest Fox News Poll.

“Two-thirds also support a ban on ‘assault weapons,’ although that majority is largely driven by Democrats.”

Meanwhile, President Trump’s job ratings are increasingly negative in the shooting aftermath, as 59% say Trump is “tearing the country apart,” compared to 31% who feel he’s “drawing the country together.”

— Former Rep. Mark Sanford (R-SC), in a campaign style video, arguing that America is “in the most precarious financial position” and “not dealing with it could crush our economy, it could wipe out whatever we’ve saved, it could even destroy our republic.”

David Byler: “If Democrats want to make further inroads into Arizona, Georgia and Texas while still winning the quadrennial swing states, their best bet is to find someone who can claim some liberal, upscale cultural credibility without looking like a socialist revolutionary. The last Democrat to win statewide office in one of those three states is Arizona Sen. Krysten Sinema, who could claim liberal cultural and political credibility as a former Green Party activist and anti-Iraq-War protester while using her moderate congressional record to win over formerly Republican suburbanites in Phoenix.”

“The candidate who most clearly fits this profile is former Texas congressman Beto O’Rourke — whose voting record is more moderate than his reputation, who is from the region and who has clearly demonstrated that he plays well in Southwestern suburbs. But it’s possible to imagine Sen. Cory Booker or Mayor Pete Buttigieg managing this kind of strategy.”

First Read: “We still have more than 170 days until the Iowa caucuses (which take place after the Super Bowl for an NFL season that hasn’t started its first regular-season game).”

First Read correctly points out that if Joe Biden’s gaffes are news, why wasn’t there the same level of discussion on what President Trump said yesterday in Pennsylvania?

Politico: “For more than a week since the shooting, O’Rourke served as a passionate voice for his border city and for immigrants more generally, with his wrenching criticism of President Donald Trump. And if O’Rourke had wanted to run for Senate, this would have been the time to make the jump — summoned home by tragedy, not limping back amid a sputtering campaign.”

“But O’Rourke has never expressed interest in running for Senate this year, after his near-miss loss to Sen. Ted Cruz in 2018. The El Paso massacre only redoubled his resolve to campaign against Trump, according to sources close to his campaign, while persistent calls for him to run for Senate exasperated his supporters.”

Dan Balz: “Romney was the disrespected front-runner in the 2012 Republican field. He could be awkward as a candidate and paid a price for it in the coverage of his campaign. But as with Biden, he led in most — not all — surveys ahead of the primaries and caucuses.”

“Romney was running in a Republican Party that was absorbing the impact of a rising and noisy tea party movement. He was described as out of step with a party that was moving swiftly to the right. He presented himself as a conservative, and his positions were generally conservative, including on immigration. But many conservatives regarded him with suspicion.”

“Biden finds himself in a somewhat similar situation today. The Democratic Party has moved to the left since he became vice president under President Barack Obama. As a senator, Biden was in what was then the party’s liberal wing.”

Washington Post: “The effort, expected to cost between $4 million and $5 million, will target 20 states, most of them battlegrounds in the Midwest and Southeast, and three states with gubernatorial elections this year: Kentucky, Louisiana and Mississippi.”

The New York Times reports Abrams will not run for president in 2020.

In a frantic effort to meet the donor threshold for the next Democratic debate, Sen. Kirsten Gillibrand (D-NY) is now offering a t-shirt in exchange for a $1 donation.

“Mark Sanford, the former South Carolina governor and congressman, is heading to another early voting state as he considers mounting an uphill challenge to President Donald Trump for the Republican presidential nomination,” the AP reports.

Former Colorado Gov. John Hickenlooper (D) “is in discussions about ending his presidential bid and entering the race for his state’s Republican-held Senate seat, potentially giving Democrats a strong candidate in a race they must win to have hopes of retaking the chamber in 2021,” the New York Times reports.

“Mr. Hickenlooper, who is mired at the bottom of public polling of the presidential race, hopped into Sen. Michael Bennet’s car on Friday night in this Northern Iowa town to discuss his impending decision, said Democrats familiar with the discussion.”

Said Bullock: “Tom Steyer spent nearly $10 million to buy his way onto the debate stage. But no matter what the DNC says, money doesn’t vote. People do.”

The Hill reports Steyer has already met the donor threshold set by the DNC.