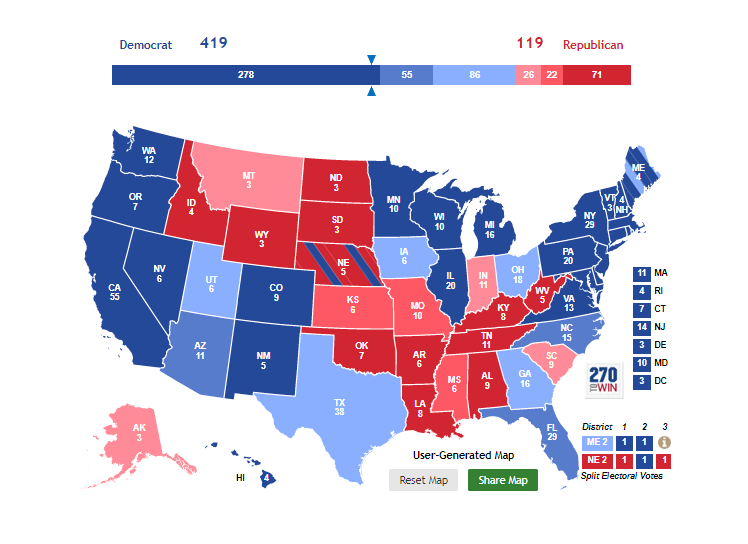 New York Magazine: “Civiqs shows the president’s net approval ratios being underwater (i.e., negative) in 10 states he carried in 2016: Arizona, Florida, Georgia, Iowa, Michigan, North Carolina, Ohio, Pennsylvania, Texas, and Wisconsin. If that were to represent how the 2020 elections turn out, Trump would have a booming 119 electoral votes.”

“And it’s not as though he’s on a knife’s edge between victory and defeat in all these Trump 2016 states where he’s doing poorly: He’s underwater by 12 points in Pennsylvania, 11 in Michigan, and nine in Arizona, North Carolina, and Wisconsin. And there’s virtually no indication that states that narrowly went for Clinton in 2016 are trending in Trump’s direction: His approval ratios are minus 18 in Colorado, minus 15 in Minnesota, minus 12 in Nevada, and minus 27 in New Hampshire.”

The Democratic group 314 Action, which supports candidates with a science background, is launching a six-figure “Draft Hickenlooper” campaign Tuesday to encourage John Hickenlooper to drop out of the 2020 presidential race and instead run for Senate, Axios has learned.

A new PPP Poll conducted on behalf of 314 Action, finds that Hickenlooper leads incumbent Republican Senator Cory Gardner by a landslide margin of 51% to 38%.

New York Times: “Mr. Biden has a long history of verbal flubs and gaffes, so much so that he is comfortable making light of these self-inflicted errors. But he is also a proud man who has often talked about his own brand of speaking plainly and off-the-cuff. In recent weeks, he has expressed frustration to allies that his candidacy will suffer if he is judged too harshly on the slip-ups, which he thinks he can do little to correct so long as he is being true to himself.”

“Some of his advisers said in interviews that they were privately nervous that his recent gaffe spree would become cemented into the larger narrative of the presidential race. They also say that Mr. Biden faces an unfair double standard.”

“Yet there is a real political risk for Mr. Biden. Some party activists have already been worried that, at 76, he may be too old to go toe-to-toe with Mr. Trump, who is 73, and win. If the accumulation of verbal missteps continues, some Democrats say, it will eventually sow doubts about what many primary voters believe is Mr. Biden’s biggest strength: that he is best positioned to beat Mr. Trump.”

“The ad, which the campaign will also promote on social media, is targeted specifically at the president. The campaign bought several television spots — a small buy of just $2,775 — throughout the day Wednesday on Fox News in Bedminster, N.J., where Trump is spending the week at his private golf club.”

“The ad will also appear in the Bedminster area that morning during ‘Fox & Friends,’ a show the president frequently watches.”

Sen. Bernie Sanders took aim at The Washington Post at two separate town hall meetings, accusing the newspaper of being biased against his campaign due to his criticism of Amazon’s labor practices and tax record, the Washington Post reports. Sanders did not cite any evidence for his claims.

“It’s crunch time for the remaining Democrats to qualify for the third presidential debate: Two weeks before the qualification deadline, Democratic presidential candidates are racing — and spending money — for the right to make the third debate in September,” NBC News reports.

Roll Call: “McCready lost this district, which President Trump carried by 11 points in 2016, by less than a thousand votes last fall. But because of alleged election fraud tied to his 2018 GOP opponent’s campaign, he’s still at it, running against a different Republican in a redo election to be held Sept. 10.”

“It’s a special election with unique factors, but as the only competitive federal race in 2019, the contest is also a test of the messages Democrats and Republicans will use in 2020 — especially in a crucial battleground state.”

“Just as Democrats were in 2018, McCready is focused on health care. His Republican opponent, state Sen. Dan Bishop, who won a 10-way primary earlier this year, is trying to tie him to socialism and ‘the squad’ — four freshman House Democrats who have become the new GOP boogeywomen.”

“So how can Trump pull of this feat? A look at the numbers suggests he’ll likely need to do something very different than continue with his current base-first, hardline-immigration and racial-resentment electoral strategy. Trump will probably need to appeal well beyond his older, less educated and white Republican base.”

“At least eight states are on course to not use any form of paper ballots or machines with paper records during the 2020 elections, a reportpublished Tuesday by New York University’s Brennan Center for Justice found,” The Hill reports.

Playbook: “The American Action Network — a center-right group that supports House GOP-linked policies — just conducted a relatively major research project, in which they polled 30 House districts: 10 that were Trump districts in 2016, 12 that were battlegrounds and eight suburban districts.”

“The main takeaways are that socialism, broadly speaking, is unpopular, but Republicans have work to do if they want to tarnish some key Democratic proposals. Once voters hear about the agenda as framed by Republicans, 61% say it is socialist. Calling Democrats’ policies ‘socialist’ causes a 10-point drop in their popularity.”

A new Gallup poll shows growing support for allowing refugees from Central America into the United States. In December, 51% of Americans approved of accepting refugees from the countries in the Northern Triangle — Guatemala, Honduras and El Salvador. Now it’s 57%.

“Startup Caucus, which is billing itself as a Republican venture capital effort, will announce on Tuesday that it will give $25,000 in seed funding to six early-stage tech companies. It also plans to provide the startups with a 12-week training and support program,” Politico reports.

“The fund is intended to provide Republicans with an answer to Higher Ground Labs, a Democratic tech incubator that has helped to bankroll a wave of liberal startups. Higher Ground Labs, whose financial backers include LinkedIn founder Reid Hoffman, supplied more than $5 million in seed funding during the 2018 midterms and recently announced plans to invest over $10 million during the 2020 campaign.”

Politico: “A little over a month ago, despite putting on a brave face publicly, Bernie Sanders’ aides privately concluded that a shakeup was needed for his presidential campaign. The Vermont senator had neglected to practice in mock sessions before the first 2020 debate, and failed to aggressively take on former Vice President Joe Biden on stage. On the trail, he was sticking to the old hits.”

“Now, Sanders and his team have settled on a new strategy designed to make him stand out in the massive field: They’re betting that a renewed focus on his signature proposal of Medicare for All is the key to jump-starting his candidacy and overtaking Biden as the race ramps up this fall.”