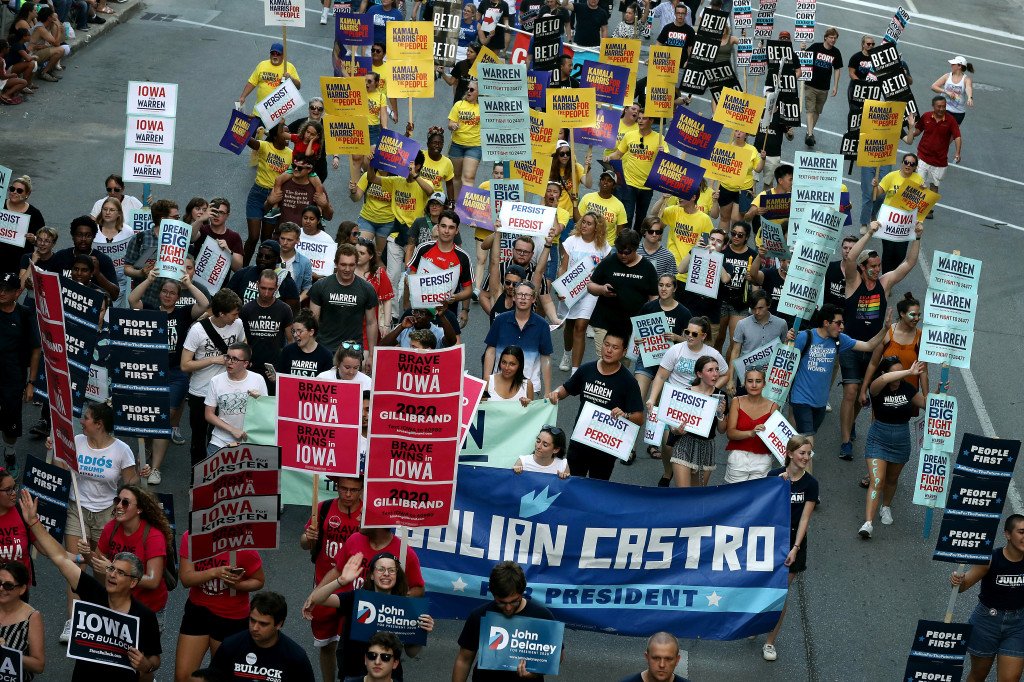 Associated Press: “For someone whose White House ambitions were dismissed by some Democrats earlier this year after a shaky campaign launch, Warren’s reception in Iowa this weekend was a clear warning sign to other candidates that hers is a campaign to be reckoned with in the state that kicks off the race for the party’s nomination.”

“As the caucuses near, strategists say Warren’s ground-level organization — demonstrated by her large staff and a proven ability to get her supporters to appear at large events like the fair — is fueling her momentum.”

First Read: “For all of the discussion about whether Democrats can win Texas in 2020, or whether they have solid chances to flip Senate seats in Arizona and Georgia, one demographic development has become crystal clear: President Trump is losing America’s suburbs.”

“In the six national NBC/Wall Street Journal polls conducted this year, Trump’s job rating has been underwater among suburban residents — with just one exception.”

“And what do Arizona, Georgia and Texas have in common? They have lots of suburban voters — either outside one major metropolitan area (in the cases of Arizona and Georgia), or outside multiple major cities (regarding Texas).”

Michael Bloomberg told CBS News that he is holding off on endorsing any of the current presidential candidates, adding that frontrunner Joe Biden is “not a lock” for the nomination.

Said Bloomberg: “No, I think — and Joe would certainly tell you — that he’s not a lock for the nomination. There are 20 candidates, of which the majority of them have a really legitimate chance.”

Politico: “From mangling a favorite one-liner to almost suggesting that poor kids aren’t white to flubbing his campaign’s text message address on the debate stage last week, Joe Biden’s propensity for verbal missteps burst into view after he mostly kept it in check for the first three months of his candidacy.”

“It reflects an ongoing difficulty for Biden: His gaffes inevitably draw outsize attention, overshadowing his message and, at times, the depth and versatility of his remarks. Biden’s headline-grabbing comment about “poor kids” was at a marathon, two-hour event addressing the Asian-Latino coalition, where he took questions and then delivered lengthy answers, at times delving deep into policy.”

He added: “Not a single patient at University Medical Center or Del Sol Hospital, the two hospitals caring for survivors of that attack, wanted to see the president. That says it all, if you ask me.”

“As bad as it’s been for Texas Republicans lately, some members of the party are warning that 2020 could be even worse,” Politico reports.

“The rash of recent House GOP retirements is just the latest sign of a state party in distress: In last year’s midterms, Democrats flipped a pair of longtime GOP districts, a Democrat came within striking distance of a Senate seat and more than 50 elected Republican judges lost their jobs. Democrats also gained ground in state legislative races.”

Charleston Post & Courier: “As the 2020 Democratic race prepares to enter the crucial fall campaign season, it’s now former Vice President Joe Biden who is far in front of the pack for South Carolina’s pivotal First in the South primary — and determined not to let history repeat itself.”

“Some supporters of other candidates, like former state Rep. Bakari Sellers, who endorsed U.S. Sen. Kamala Harris of California, cite potential parallels with 2008 as a reason why they believe the race remains wide open despite Biden’s commanding lead.”

Said Sellers: “I think the vice president’s support, a lot like the first lady’s support at the time, is very wide, but it’s not deep. I think once Sen. Harris is able to prove her electability, which I don’t have much concern that she will, I expect the tide to change with African American voters like it did with Hillary Clinton.”

“Maine will see unprecedented amounts of political ad spending in the 2020 presidential cycle, with a nationally targeted U.S. Senate race drawing more than twice what has ever been spent on a single campaign here,” the Bangor Daily News reports.

Politico: “A Democratic presidential field that has struggled to precisely define its general election indictment of Donald Trump appears to have finally found it. In the wake of mass shootings in Ohio and Texas — the latter of which was tied to a suspect whose anti-immigrant sentiments led to the killing of 22 people — candidates are road-testing a withering argument that draws a direct line between gun violence and the president’s racist rhetoric.

“Frankly, it’s made us wish O’Rourke would shift gears, and rather than unpause his presidential campaign, we’d like to see him take a new direction.”

“So Beto, if you’re listening: Come home. Drop out of the race for president and come back to Texas to run for senator. The chances of winning the race you’re in now are vanishingly small. And Texas needs you.”

Rep. Tulsi Gabbard (D-HI) told CBS News that she will be taking a two-week absence from her presidential campaign Monday to report for active duty with the Hawaiian Army National Guard in Indonesia.

0 comments on “The Campaign Report”