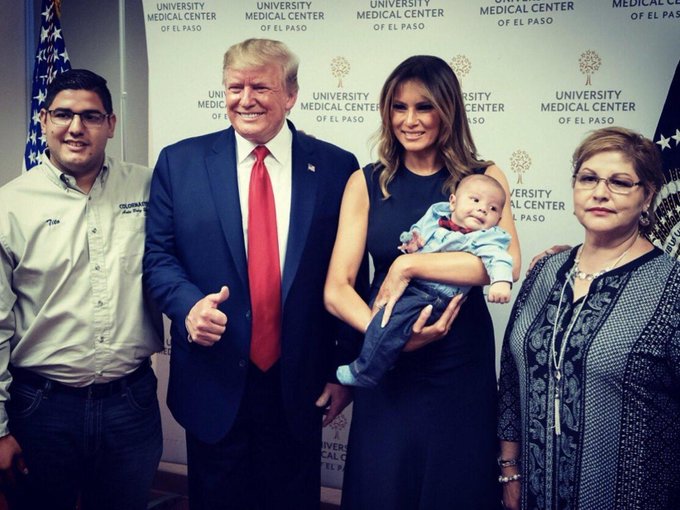 “Under intense pressure to take action on gun safety in the wake of two weekend massacres, Senator Mitch McConnell, the majority leader, expressed a new willingness Thursday to consider a measure expanding background checks for all gun purchasers, saying it will be ‘front and center’ in a coming Senate debate on how to respond to gun violence,” the New York Times reports.

“Mr. McConnell, who has strongly opposed background checks in the past, made his remarks in an interview with a Kentucky radio host, Terry Meiners of WHAS in Louisville. While he did not support a bill requiring background checks, his remarks appeared to underscore the possibility of a shift in the politics of Washington’s divisive gun debate.”

Said Trump: “I think we can do very meaningful background checks. I think Republicans are going to be great and lead the charge along with the Democrats.”

Playbook: “Put this all together, and you’ll come to one conclusion: This entire debate — what happens, what doesn’t happen and what might happen — comes down to Trump. So, when he makes up his mind, makes it public and leans into it, that is what really matters. Until then, it’s all just noise. This is not one of these issues where Congress is going to act without the president. Many, many Republicans are going to take their cues on this from POTUS.”

New York Times: “Mr. Trump talked up the idea of a signing ceremony in the Rose Garden and insisted that he believed it would be successful, according to those briefed on the call. Mr. LaPierre made clear that his members — many of whom back Mr. Trump — would not favor such a move.”

Aaron Blake: “A new poll from Stanley Greenberg of left-leaning Democracy Corps provides some more encouraging signs for Warren. It tested both her and Biden against Trump, seeking to find out how the leading candidates from the party’s two flanks might compare in a 2020 general election. The answer is: pretty similarly.”

While Biden leads by eight points (49-41) in a race that includes Rep. Justin Amash (I-Mich.) as the Libertarian nominee, Warren leads by six (49-43). What’s more, Greenberg finds that, while Biden does better among independents (+10 vs. Warren’s +5), Warren consolidates Democrats better (getting 90 percent of their support vs. Biden’s 86 percent). And while Biden gets 21 percent of Republican moderates, Warren gets a respectable 15 percent.”

“Perhaps most importantly for Warren, she actually does just as well as Biden among working-class white voters. Both trail by 19 points with a group Trump won by 27 points in 2016 — a margin he’ll probably need to match in 2020.”

President Trump announces that he’s received another “very beautiful letter” from Kim Jong Un in which Kim tells Trump he’s not happy about US-South Korea military exercises, Trump appears to agree with Kim and Trump chides South Korea for not paying the US more money. Donald Trump is a traitor to America.

“Senate Republicans are looking to pay for President Trump’s border wall in part by putting about $5 billion less in the largest domestic spending bill,” Roll Call reports. “That move signals a likely fight over wall funding, as well as over Trump’s ability to reprogram or transfer funds to the border, when the fiscal 2020 appropriations process resumes after Congress returns in September.”

“The attorney for a Montana man accused of throwing a 13-year-old boy to the ground at a rodeo because the teenager didn’t remove his hat during the national anthem said his client believes he was acting on an order from President Trump,” CBS News reports.

Jonathan Bernstein: “On the surface, the main development was a slump for Kamala Harris, who has now dropped back to fourth place in the polls. But I’ll stick with what I said going in: Harris, Joe Biden, Pete Buttigieg and Elizabeth Warren didn’t really have much at stake in this round of debates. None of them had much to gain or lose from a modest shift in the polls. They’ll all be around for months, and will probably compete seriously in Iowa. And if Harris had to have a bad debate, this was probably the time to do it; she can learn from the experience and do better when more voters are paying attention.”

“The candidates with the most at stake were those who were in grave danger of failing to qualify for the September debates but might have still have had a realistic chance if they did well. None of them came close to doing what they needed to do. Michael Bennet, Steve Bullock, Kirsten Gillibrand, John Hickenlooper, Jay Inslee? None of them is any closer to qualifying, and that may mean the end of the road for them.”

Just after President Donald Trump forced the retirement of Sue Gordan, a three-decade career official whom he deemed too close to former DNI Dan Coats, the President announced Thursday his pending nomination of retired Navy Admiral Joseph Maguire as the new DNI.

Though Maguire has not come up in the intelligence community, per the Washington Post, he is seen as at least a more reasonable choice that Rep. John Ratcliffe (R-TX), a rabid Trump partisan whose nomination collapsed last week.

The House Judiciary Committee is officially conducting an impeachment inquiry into Trump and will decide by the end of the year whether to refer articles of impeachment to the House floor. In a July court filing to get the full, unredacted Mueller report, the Judiciary Committee argued that it needed the information because it “is conducting an investigation to determine whether to recommend articles of impeachment.” Today, chairman Jerry Nadler clarified that “This is formal impeachment proceedings.” That timeline would put an impeachment battle in the middle of the Democratic presidential primary contests.

The El Paso shooter that killed 22 people told police that his target was “Mexicans“ and confessed that “I’m the shooter” when he was arrested. Patrick Crusius also said he had used an AK-47-style rifle and brought multiple magazines with him to carry out the killings. Authorities believe Crusius was the author of a “manifesto” posted online shortly before the attack, saying he wanted to stop the “Hispanic invasion of Texas.”

Harry Enten: “I was once a skeptic on Texas turning blue, but I’ve changed my tune because Trump is a uniquely unpopular Republican in Texas who seems to be the driver of an important development: Like other Americans, Texans with a college degree are shifting rapidly from red to blue, and Democrats have a lot of room to grow with them in Texas.”

“This doesn’t mean the state will go Democratic in 2020 (Democrats not named Joe Biden currently are losing to Trump in the Lone Star state in high quality polling), but it is a real possibility.”