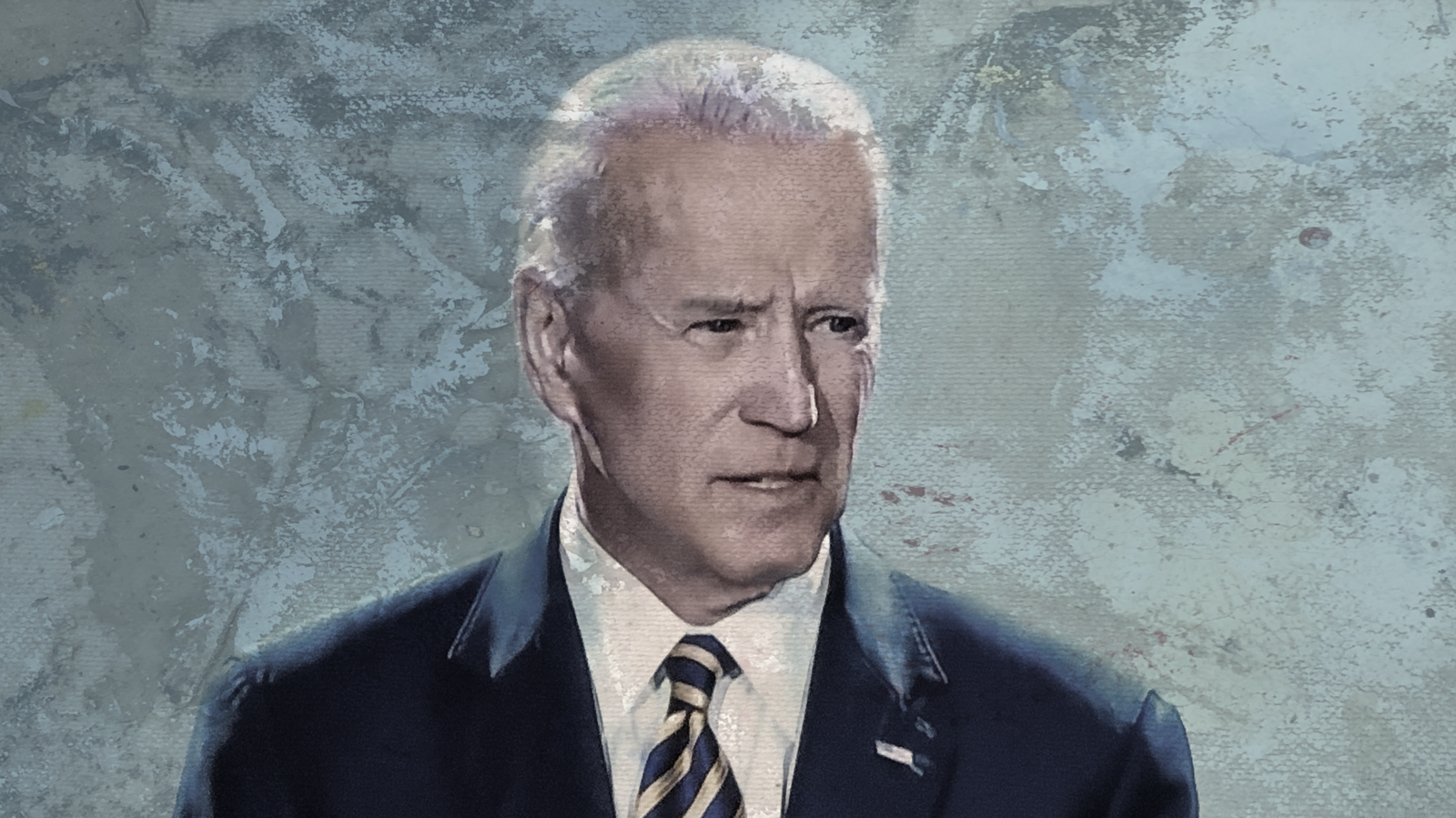 Joe Biden eviscerated President Trump in an Iowa speech condemning his embrace of white supremacy. He even used an insult Trump has often used on him: “This president has fanned the flames of white supremacy in this nation. His low-energy, vacant-eyed mouthing of the words written for him condemning white supremacists didn’t fool anyone at home or abroad.”

He added: “Trump readily, eagerly attacks Islamic terrorism, but can barely bring himself to use the words ‘White supremacy.’ And even when he says it, he doesn’t appear to believe it. He seems more concerned about losing their votes than beating back this hateful ideology.”

Biden began by stating the obvious: “The words of a president matter. They can move markets. They can send our brave men and women to war. They can bring peace. They can calm a nation in turmoil. They can console and confront and comfort in times of tragedy… They can appeal to the better angels of our nature. But they can also unleash the deepest, darkest forces in this nation.”

If Joe Biden becomes the Democratic nominee and then is elected President, we will look back on today as an important day if not the launch point of that journey. Because the contrast between Biden and Trump today could not have been so stark. Only one of those men acted like a President today, and his language and message was profound and filled an absence of leadership the country has sensed since 2017. As Trump rage tweeted while watching the speech, Biden rose to the challenge of someone who aspires to be a national leader.

From the speech: “Trump offers no moral leadership; no interest in unifying the nation, no evidence the presidency has awakened his conscience in the least. Instead we have a president with a toxic tongue who has publicly and unapologetically embraced a political strategy of hate, racism, and division.”

President Trump was apparently watching Joe Biden’s speech while on Air Force One headed to El Paso this afternoon. He did not enjoy it. Trump’s tweet came as all three major cable networks carried Biden’s speech in which he accused Trump of fanning “the flames of white supremacy.”

The Cincinnati Enquirer recorded Whaley’s response to Trump’s tweet: “I don’t know what they’re talking about misrepresenting. Oh well, you know, he lives in his world of Twitter.”

CNBC notes Smith acknowledged and brushed off Trump’s tweet on air: “Good afternoon, Mr. President, it’s nice to have you with us.”

This is quite a moment caught on video: Beto O’Rourke meets Sean Nixon, a Walmart employee who witnessed the mass shooting last weekend.

O’Rourke asked if he was getting counseling, offered his personal cell number and said to call if he needs help.

Ross Douthat: “What links Donald Trump to the men who massacred innocents in El Paso and Dayton this past weekend? Note that I said both men: the one with the white-nationalist manifesto and the one with some kind of atheist-socialist politics; the one whose ranting about a ‘Hispanic invasion’ echoed Trump’s own rhetoric and the one who was anti-Trump and also apparently the lead singer in a ‘pornogrind’ band.”

“Bringing up their differing worldviews can be a way for Trump-supporting or anti-anti-Trump conservatives to diminish or dismiss the president’s connection to these shootings. That’s not what I’m doing. I think Trump is deeply connected to what happened last weekend, deeply connected to both massacres. Not because his immigration rhetoric drove the El Paso shooter to mass murder in some direct and simple way; life and radicalism and violence are all more complicated than that. But because Trump participates in the general cultural miasma that generates mass shooters, and having a participant as president makes the problem worse.”

Reporters who traveled with President Trump to Dayton say they were unable to cover his visit to the Miami Valley Hospital, where he met for an hour with first responders and victims of the mass shooting last weekend.

“White House officials rebuffed efforts by their colleagues at the Department of Homeland Security for more than a year to make combating domestic terror threats, such as those from white supremacists, a greater priority as specifically spelled out in the National Counterterrorism Strategy,” CNN reports.

Said a source close to the Trump administration: “The White House wanted to focus only on the jihadist threat which, while serious, ignored the reality that racial supremacist violence was rising fast here at home. They had major ideological blinders on.”

Politico: “While Trump boasts of action on firearms, his administration has actually eased gun restrictions over the past two and a half years. Federal agencies have implemented more than half a dozen policy changes — primarily through little-noticed regulatory moves — that expand access to guns by lifting firearms bans in certain locations and limiting the names on the national database designed to keep firearms away from dangerous people.”

“The administration asked the Supreme Court to overturn New York City restrictions on transporting handguns outside homes. And it pushed to allow U.S. gunmakers to more easily sell firearms overseas, including the types used in mass shootings… His gun control measures were narrow, lengthy and, in the case of the bump stock ban, could be reversed by the next president because it is not written into law.”

“As early as Wednesday, Democrats are expected to file a lawsuit to enforce their subpoena for former White House counsel Donald McGahn’s testimony, sharply escalating their dispute with the White House by sending the fight over a key witness in special counsel Robert Mueller’s report to court for a resolution,” ABC News reports

“The Puerto Rico Supreme Court ruled unanimously that Pedro Pierluisi’s swearing-in as governor last week was unconstitutional, extending the political turmoil that has paralyzed the U.S. territory’s government,” the Wall Street Journal reports. “Mr. Pierluisi took office last Friday moments after Gov. Ricardo Rosselló resigned in the wake of a scandal over vulgar and derogatory text messages between him and his advisers.”

President Trump’s new Air Force One fleet will cost a total of $5.2 billion, up from the 2016 estimate of $3.2 billion, Air Force Magazine reports. In early 2017, President Trump claimed he negotiated with Boeing to lower the price by about $1 billion.

“Documents indicate that the National Rifle Association planned to purchase a luxury mansion in the Dallas area last year for the use of chief executive Wayne LaPierre,” the Washington Post reports.

“The discussions about the roughly $6 million purchase, which was not completed, are now under scrutiny by New York investigators. The transaction was slated to be made through a corporate entity that received a wire of tens of thousands of dollars from the NRA in 2018.”

Richard Haass, president of the Council on Foreign Relations and author of A World In Disarray, tweets that “disarray” may be “too restrained to capture the world’s deterioration.”

He points to the US-China trade war, the hottest July ever, Hong Kong on the edge, odds of a U.S.-Iran war, Turkish-Kurdish conflicts mounting, new India-Pakistan Kashmir crisis, Japan-South Korea confrontation and a looming Brexit.

Mike Allen: “None of those are passing events. All are long-term crises that require expertise and bandwidth that are lacking in the always short-staffed Trump administration.”

“Gebert, works as a foreign affairs officer assigned to the Bureau of Energy Resources… Online, and in private correspondences with other white nationalists, Gebert uses ‘Coach Finstock’ as a pseudonym. Through that alias, he expressed a desire to build a country for whites only.”

Wall Street Journal: “The volley-for-volley trade war between China and the U.S. is accelerating at a time when Chinese President Xi Jinping can ill afford to make concessions, raising the likelihood of a protracted struggle between the world’s two biggest economies.”

“Mr. Xi is ordering a celebratory run-up to the 70th anniversary of the People’s Republic in October, an event that Communist Party watchers and media say will showcase him as a strong leader of a powerful nation. With his government struggling to rejuvenate a sluggish economy and quell antigovernment protests in Hong Kong, Mr. Xi has little leeway to take steps that would undercut his strongman image.”

Los Angeles Times: “The potential loser in this international game of chicken is the U.S. economy. Both long term and short term, the White House is playing with fire — and it could end up burning Trump’s reelection bid.”