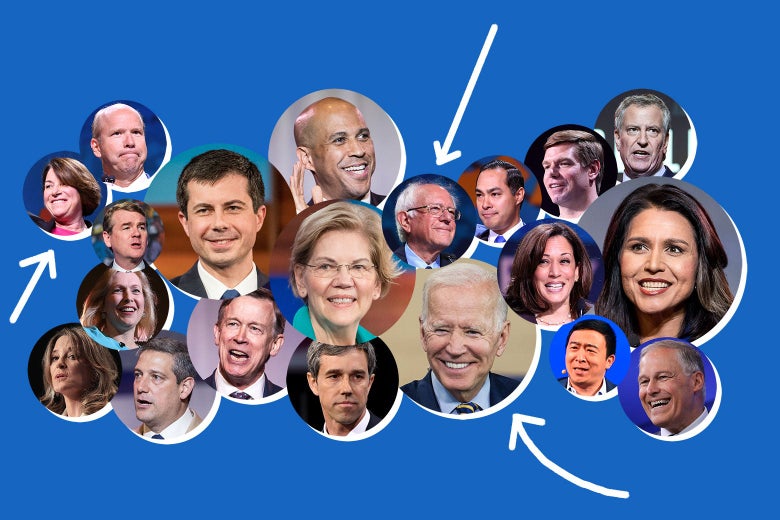 A new Quinnipiac poll finds Joe Biden leading the Democratic presidential field with 32%, followed Elizabeth Warren at 21%, Bernie Sanders at 14%, Kamala Harris at 7%, Pete Buttigieg at 5%, Cory Booker at 2% and Beto O’Rourke at 2%.

A new Suffolk University/Boston Globe poll in New Hampshire finds Joe Biden leading the Democratic field with 21%, followed by Bernie Sanders at 17%, Elizabeth Warren at 14%, Kamala Harris at 8%, Pete Buttigieg at 6% and Tulsi Gabbard at 3%.

Said pollster David Paleologos: “This is shaping up to be a race between three candidates who all cannot figure out how to get past each other, and then every one else who are really vying for fourth place or just survival.”

“Among the reasons why Biden, Sanders, and Warren will be difficult to topple from the top-tier: unlike other candidates, a significant portion of their supporters say they have made up their minds about the race.”

Bloomberg: “After two gruesome mass shootings in a 24-hour span, some Republicans are raising alarms that their opposition to new firearm limits is making the party toxic to the suburban women and college graduates who will shape the 2020 election.”

“Sen. Elizabeth Warren shares more donors with other presidential candidates than anyone else in the 2020 race, suggesting a crossover appeal that has helped her raise more than $25 million in a crowded primary without holding traditional fundraisers,” the Wall Street Journalreports.

“More than 40% of the nearly 442,000 Democratic donors who contributed to multiple candidates gave to Ms. Warren… She and California Sen. Kamala Harris share about 62,000 donors, and she has about 60,000 donors in common with Vermont Sen. Bernie Sanders. About 54,000 donors have given to both Ms. Warren and Mayor Pete Buttigieg.”

Stanley Greenberg: “The press dutifully reports that President Trump has the approval of 85% of Republicans, and this poll shows he has 87%. But that is not the same as enthusiasm, and on that Democrats have a big gap: a stunning 85% strongly disapprove; while 67% of Republicans strongly approve. That is an 18 point enthusiasm gap. (And we know from 2018, it was the less enthusiastic Republicans who did not vote or shifted to the Democrats.) This gap is twice the enthusiasm gap on the president that gave the Democrats such a victory in 2018.”

Also important: “Just as in 2018, President Trump is surely making immigration the top voting issue for Republicans; that is hurting his electoral prospects, not helping. The percentage saying immigrants strengthen the country, are not a burden, has risen from 54% after the election to 65% now, 52% strongly. Only 26% agree with the president that they are a burden because they take jobs, housing, and health care.”

Hickenlooper said he would “be a fool” to continue running for president if his standing in the polls doesn’t improve, while adding, “I’ve never ruled out anything.”

Daily Beast: “Two signs promoting the QAnon conspiracy theory are visible in a video from Donald Trump’s presidential campaign, marking the latest link between the president and followers of the fringe movement that the FBI recently described as a potential source of domestic terror.”

“The inclusion of the signs in the campaign video could be entirely accidental, as Trump rallies have become prominent gathering spots for believers in the QAnon conspiracy, making it harder to grab footage from the rallies that do not include such images. At a Trump rally last week, for example, a warm-up speaker recited a QAnon slogan during his speech. But the campaign video will, nevertheless, be likely interpreted by the Q community as a cryptic acknowledgement by Trump that their beliefs are real.”

“Orange County, a region once associated with John Birch, Richard Nixon and Ronald Reagan, is about to be home to more Democrats than Republicans,” the Orange County Register reports.

“At midnight, Aug. 6, the Registrar of Voters posted daily tracking figures showing just nine fewer registered Democrats than Republicans in Orange County, 547,385 vs. 547,394. Given that local Democrat registrations recently have outpaced Republicans by 50 to 100 a day, the flip is expected to become official when the Registrar posts new numbers later today.”

Politico: “Kamala Harris hired a dream team of operatives. Joe Biden has solid establishment support. Bernie Sanders heads a volunteer army. And Julián Castro is seen as a ‘sleeper.’ But of the two dozen Democrats running for president, none matches Elizabeth Warren when it comes to campaign operation sprawl, crowd size or buzz among activists and operatives in Nevada.”

David Cay Johnston: “This is the time to take advantage of Trump’s inability to laugh at himself. For Democrats (and the dwindling numbers of principled Republicans) here’s some advice: don’t get mad, get funny.”

“Make fun of Trump and his hyper-inflated ego, but do it with flair the way Obama did. This may require hiring some great speechwriters who can come up with smart and funny lines in a hurry. (Hint: A former head writer for Saturday Night Live, a very smart guy by the name of Al Franken, is available.)”

“When Trump fires back with vile words, which he must, don’t take the bait. Just laugh it off. Just make the laughter at Trump’s expense.”