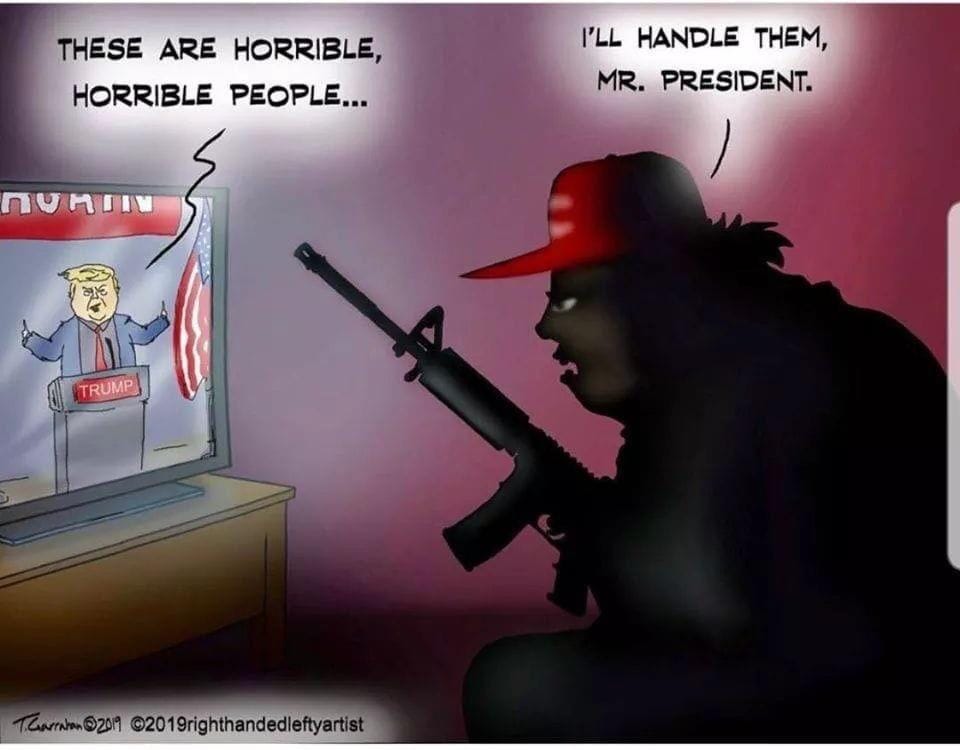 Another white right wing Trump loving terrorist kills 19 people and injures 40 more in El Paso. His name is Patrick Crusius of Dallas. He wrote a manifesto beforehand and posted it on the white supremacist forum 8Chan concerning his motive and intentions. He was upset about the Latino invasion of Texas and America. He was angered by “the Great Replacement.” He only targeted Latinos in his terrorist attack. President Trump spent hours last night washing the blood off his hands.

As a side note for the gun nuts, your “Let’s Arm Everyone so that Good People with Guns shoot back” theory has failed. How many Texans in that Walmart do you figure were packing? I’d say a good many. Several survivors were interviewed after the shooting and said they were carrying. And yet no good man with a gun stopped him. Not because they weren’t brave or courageous. It’s because in a split second when you hear gunfire, you are busy running for your life and hiding rather than standing up and loading your gun. That is obvious to anyone with two brain cells. Unfortunately, most conservatives don’t have one.

Washington Post: “Across the country, lawmakers took to cable television and Twitter to react to the mass shooting, with Republicans offering prayers and condemnations of the violence without mentioning guns and Democrats going a step further to decry yet another missed opportunity to address the nation’s gun laws. It was similar to what these lawmakers said less than a week ago, when a 19-year-old opened fire with an assault-style rifle at a food festival in Gilroy, Calif., killing three people and wounding 12 others.”

— Mayor Pete Buttigieg, quoted by the Daily Beast, in the wake of today’s deadly shooting in El Paso, Texas.

Texas General Land Office Commissioner George P. Bush (R) called on all Americans to stand against “white terrorism” after a gunman who espoused white supremacist views in a manifesto killed at least 18 in El Paso, The Hill reports.

Bush, son of former Florida Gov. Jeb Bush (R), said Saturday evening that “white terrorism” was a “real and present threat that we must all denounce and defeat.”

He added: “I believe fighting terrorism remains a national priority. And that should include standing firm against white terrorism.”

Dan Balz: “Trump commands rank-and-file support in a remade Republican Party, but there are plenty of other indications suggesting that many Republican officials and strategists fear the effects of his disruptive behavior and tactics. Having attacked the four young House females, he spent last week attacking Rep. Elijah E. Cummings (D-MD), who is African American, and running down the city of Baltimore.”

“Republican officials worry that, the longer the president continues down the path of nativism and of stoking racial division, the more the GOP is at risk of seeing its coalition shrink, eventually to become a party almost exclusively for and of white voters and particularly of older men.”

The firebrand attorney Michael Avenatti told CNBC that he is again considering a run for the Democratic nomination for president after he declared last year he wouldn’t take part in the contest.

Said Avenatti: “I don’t think I need to make a final decision for a number of months. I have the name ID and everyone knows I’m one of the few effective fighters that the Dems have.”

Still, Avenatti said he has a “number of things to deal with” before deciding whether he will jump into the race. He was arrested in New York in March for an alleged $20 million extortion scheme against Nike. A month later, federal prosecutors in California indicted Avenatti on three dozen counts including stealing money from clients and lying to regulators about his income.

Man, delusional narcissism is a hell of a drug.

“More than 600 people were detained for participating in an unsanctioned rally in downtown Moscow, which opposition leaders had called to demand the inclusion of independent candidates in next month’s city council elections. At a mass rally on July 27, police took almost 1,400 people into custody and violently clashed with the thousands of protesters, beating some with truncheons.”

Good. I hope Russia burns. May there be a civil war that results in Putin’s head on a spike.

The Washington Post reports that Sanders’ early state primary support from 2016 is shifting to Warren: “This shift comes as Warren is publicly projecting a friendly attitude toward the Vermont senator — backing him up on the debate stage, refusing to criticize him when reporters ask, restraining her staffers from posting tweets needling him.”

“That avoids alienating Sanders voters whom she may need later. But strategists for both candidates say there’s only room for one of them to survive far beyond the early primaries, making for a below-the-surface battle, especially in Iowa and New Hampshire.”

David Axelrod: “Elizabeth Warren is running a strategically brilliant campaign. More than any other candidate, she has a clear, unambiguous message that is thoroughly integrated with her biography. That is essential to a successful campaign.”

“Her unsparing critique of corporate excess and her expansive — and expensive — agenda for change mirror those of the reigning left champion, Bernie Sanders, in places. But where Sanders sometimes seems like a parody of himself — or of Larry David’s parody of Sanders — Warren seems fresher, deeper and more precise in her execution.”

“A Republican senator held up the confirmation of a White House budget official this week in an attempt to obtain sensitive information about border wall contracts he has been trying to steer to a major donor,” according to emails obtained by the Washington Post.

“The emails show Sen. Kevin Cramer (R-N.D.) blasting the ‘arrogance’ of the U.S. Army Corps of Engineers after senior military officials told him the contracts contained sensitive, proprietary information provided by the companies that could not be shared.”

“Immediately after President Trump boasted to White House reporters that the United States rakes in billions of dollars from China because of his tariffs, Fox News anchor Neil Cavuto issued an on-air fact-check of the president’s remarks, directly telling his viewers that Trump is wrong,” the Daily Beast reports.

Said Cavuto: “I don’t know where to begin here. Just to be clarifying, China isn’t paying these tariffs. You are. You know, indirectly and sometimes directly.”

“North Korea said Saturday its leader Kim Jong Un supervised another test-firing of a new multiple rocket launcher system that could potentially enhance the country’s ability to strike targets in South Korea and U.S. military bases there,” the AP reports.

“Republicans have long idealized Texas as a deep-red frontier state, home to rural conservatives who love President Trump. But political turbulence in the sprawling suburbs and fast-growing cities are turning the Lone Star State into a possible 2020 battleground,” the Washington Post reports.

“For a state that once elevated the Bush family and was forged into a Republican stronghold by Karl Rove, it is an increasingly uncertain time. Changing demographics and a wave of liberal activism have given new hope to Democrats, who have not won a statewide elective office since 1994 or Texas’s presidential vote since Jimmy Carter in 1976.”

“Gabbard’s camp said it had garnered 130,000 unique donors, with more than 400 donors in at least 20 states. To qualify for September’s debate, candidates must hit 130,000 donors and get 2 percent support in at least four different polls.”

“Gabbard has yet to reach the polling threshold.”

Said Farage: “You realise, 48 hours on, it was genius because what’s happened is the Democrats gather round the Squad, which allows him to say, ‘Oh look, the Squad are the centre of the Democratic party.’”

He added: “He’s remarkably good at what he does. He does things his way. But he is a remarkably effective operator.”