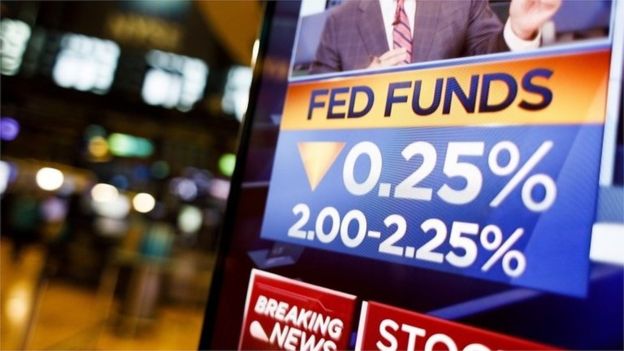 As with yesterday, all debate reaction and commentary will be in a separate thread published a little later this morning. This post will concern non-primary debate events and Trump atrocities.

“In the biggest Fed decision since 2015, the Federal Reserve said on Wednesday it would slash its benchmark interest rate by a quarter point, as expected,” Axios reports. “While previous Fed regimes have cut rates when the economy was not in the throes of a recession, it’s still a rare move — one that will likely be a legacy-shaping milestone in Jerome Powell’s tenure as Fed chairman.”

The New York Times says the cut “is meant to protect the economy against the potentially harmful effects of a growth slowdown in China and Europe and uncertainty from President Trump’s trade war.”

Politico: “[The Fed moved] in part because the president’s bruising trade policy has helped fuel a global manufacturing slowdown and injected deep uncertainty into executive suites around the world.”

“Fed Chairman Jerome Powell won’t directly say it directly after his meetings Tuesday and Wednesday. But the central bank will reverse course at least in part to save the Trump economy from Trump.”

President Trump defended himself on Twitter against accusations of racism by calling himself the “least racist person in the world” and by insulting the intelligence of CNN’s Don Lemon, who is black, referring to him as “the dumbest man on television.”

The Washington National Cathedral warned in a statement that President Trump’s words “give cover to white supremacists.”

“Make no mistake about it, words matter. And, Mr. Trump’s words are dangerous.

These words are more than a “dog-whistle.” When such violent dehumanizing words come from the President of the United States, they are a clarion call, and give cover, to white supremacists who consider people of color a sub-human “infestation” in America. They serve as a call to action from those people to keep America great by ridding it of such infestation. Violent words lead to violent actions.

When does silence become complicity? What will it take for us all to say, with one voice, that we have had enough? The question is less about the president’s sense of decency, but of ours.”

Another Republican has announced he will retire rather than seek reelection. This time it is Rep. Mike Conaway (R-TX), retiring after 15 years in Congress, Politico reports. That is now 5 Republicans in the last week. This should worry the GOP, according to Jonathan Bernstein:

“One interpretation is that Republicans don’t expect to return to a House majority in 2020. The current breakdown is 235 Democrats, 197 Republicans, one independent (the former Republican Justin Amash), and two vacancies last held by Republicans. So the party, if it holds the two open seats and wins back Amash’s, would only need to gain 18 others to restore its majority. A spate of retirements signals that they don’t really think that’s likely.”

“The thing about House elections is that expectations matter. A lot. The more a party thinks it’s going to be a good year, the more it will attract the resources needed to win, including strong candidates.”

“As for the timing? It’s possible that all the new retirements were long planned. It’s interesting, though, that they come after Robert Mueller’s testimony revived interest in President Trump’s scandals – and, perhaps more relevant, after Trump’s ‘send her back’ rally and his continuing series of bigoted tweets. It’s not crazy to speculate that one or more of these Republicans just didn’t want to campaign for reelection in that kind of atmosphere.”

Washington Post: “The missile launch was the second in a week, after Pyongyang also fired two short-range ballistic missiles into the Sea of Japan last Thursday.”

“Although a ballistic missile test is a violation of United Nations Security Council resolutions and the missiles are designed to threaten South Korea, Trump played down the significance of last week’s test, saying many countries test short-range missiles.”

“Plodding progress in trade negotiations between the U.S. and China this week is partly the result of a new tactic from Beijing, which increasingly thinks waiting may produce a more favorable agreement,” the Wall Street Journal reports.

“U.S. and Chinese negotiators held four hours of talks Wednesday, after a dinner the night before, and then wrapped up their first face-to-face meeting since negotiations foundered more than two months ago. Neither side announced any breakthroughs; China described the talks as constructive and said the next round would be held in the U.S. in September.”

A Chinese Foreign Ministry spokeswoman told CNBC that it was clear it was the United States that continued to “flip flop.”

New York Times: “Aides to the congressman chosen by President Trump to lead the nation’s intelligence agencies were forced on Tuesday to clarify his claims that he had won terrorism convictions as a federal prosecutor, as his background came under new scrutiny.”

“Mr. Trump’s pick, Representative John Ratcliffe, Republican of Texas, had said on his House website and in campaign material that he had tried suspects accused of funneling money to the Hamas terrorist group. But instead, an aide said, Mr. Ratcliffe had investigated side issues related to an initial mistrial, and did not prosecute the case either in that proceeding or in a successful second trial.”

Politico: “The Justice Department is investigating whether former Interior Secretary Ryan Zinke used personal email accounts for official business, a matter that has become part of a larger criminal probe into the departed official.”

“The man at the center of an election fraud investigation in a 2018 North Carolina congressional race faced new indictments Tuesday along with multiple other individuals,” CNN reports.

“Leslie McCrae Dowless, a political operative in Bladen County who was connected to questionable absentee ballot activity, was indicted by a Wake County grand jury on two counts of felony obstruction of justice, perjury, solicitation to commit perjury, conspiracy to obstruct justice and possession of absentee ballot.”

“Rep. Eliot Engel (D-NY), who chairs the powerful House Foreign Affairs Committee, called for a formal impeachment inquiry into President Trump on Tuesday, becoming one of the highest-ranking members of Congress to do so,” the New York Daily News reports.

“Engel, whose committee is one of six House panels probing Trump and his administration for various wrongdoing, said in a statement that former special counsel Robert Mueller’s testimony last week made him jump on board the impeachment train.”

President Trump defended his choice for the next U.S. spy chief as someone who could “rein in” intelligence agencies that “have run amok,” fueling concerns Trump seeks assessments that support his own views, Reuters reports.

Tim Naftali: “The day after the United Nations voted to recognize the People’s Republic of China, then–California Governor Ronald Reagan phoned President Richard Nixon at the White House and vented his frustration at the delegates who had sided against the United States.”

Said Reagan to Nixon: “Last night, I tell you, to watch that thing on television as I did. To see those, those monkeys from those African countries—damn them, they’re still uncomfortable wearing shoes!”

“The exchange was taped by Nixon, and then later became the responsibility of the Nixon Presidential Library, which I directed from 2007 to 2011. When the National Archives originally released the tape of this conversation, in 2000, the racist portion was apparently withheld to protect Reagan’s privacy.”

If Rep. Elijah Cummings (D-MD) is responsible for poverty and crime in his congressional district, as President Trump has claimed for the last few days, then the Washington Post notes there is some bad news for the president about his pick to be Director of National Intelligence, Rep. John Ratcliffe (R-TX): On a number of metrics, Ratcliffe’s district is doing even worse.

US District Judge John Koeltl on Tuesday threw out the Democratic National Committee’s lawsuit against the Trump campaign, the Russian Federation, Julian Assange, and Wikileaks that alleged racketeering.

According to Koeltl, who was appointed by President Bill Clinton, the DNC was unable to prove that the Trump campaign and President Donald Trump’s other allies actively helped Russia hack the DNC email system.

Additionally, Koeltl wrote that the Foreign Sovereign Immunities Act prevented him from allowing the DNC to sue the Russian government.

The Washington Post calls the sanctions “a dramatic step bound to escalate tensions.”

Bloomberg calls it “a provocative move that diminishes the prospects for a diplomatic solution to rising tensions that have brought the U.S. and Tehran to the brink of war.”