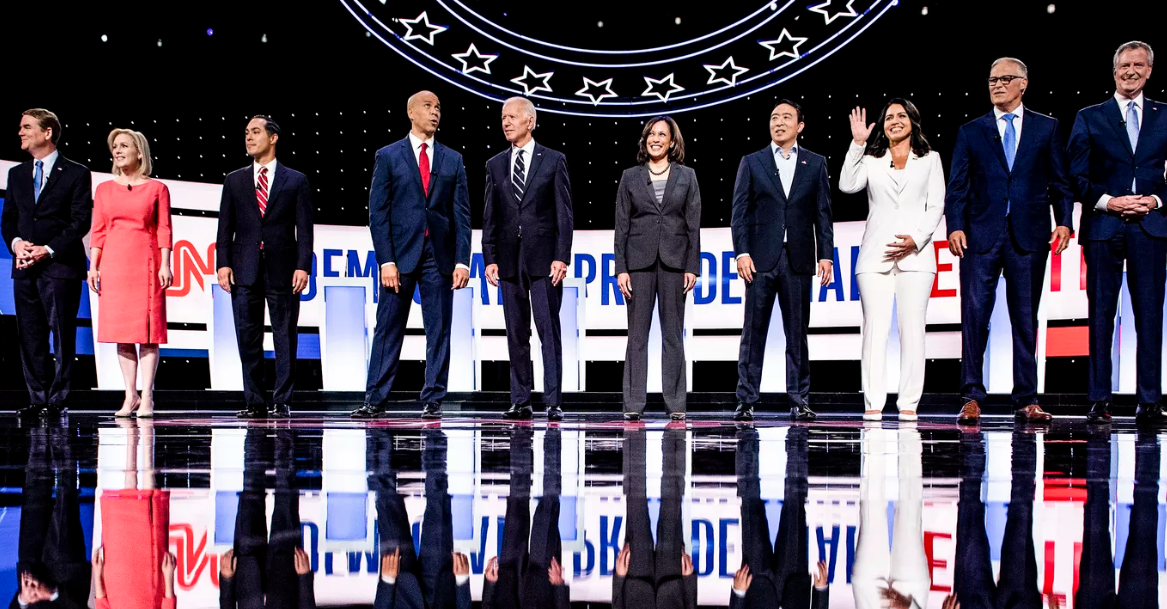 Trump is running behind his approval rating in presidential head to head polling right now, and that is a dangerous and perhaps fatal sign for his hopes for a second term.

A new Fox News poll shows Trump’s approval rate at 46%, but he attracted just 39% to 42% of the vote in matchups with the top four Democratic contenders — Joe Biden, Kamala Harris, Elizabeth Warren and Bernie Sanders.

A new NBC News/Wall Street Journal poll finds Trump’s approval at 45%, but he only managed to get only 42% to 44% against the same four Democrats.

A new Washington Post/ABC News poll pegs Trump’s approval at 47%, but got just 43% in a match up with Biden, and between 46% to 48% against the three others.

Kyle Kondik notes that Barack Obama was running at or ahead of his much higher approval rating for most of the 2012 campaign and that the approval rating of incumbent presidents around the time of their re-election correlates well with their final share of the vote.

If Trump’s approval rate stays in the low to mid-40s, and thus his polling numbers stay at or below that number, then he’ll need to convince a large number of voters who don’t like him to vote for him anyway. That was easy in 2016 against the equally unfavorable Hillary Clinton. It may not be this time.

Ron Brownstein: “After two nights of spirited debate in Detroit, many Democrats may be feeling anxious: Their 2020 front-runner didn’t entirely mollify concerns about his political skills, and his three major rivals positioned themselves in ways that could leave the party vulnerable in the general election.”

“Joe Biden, under fire from virtually every other candidate on the stage, delivered a more vigorous performance… With only a few exceptions, Biden also held to his moderate positioning on the major issues dividing the field. But he served up enough rhetorical stumbles and moments of stammering uncertainty to sustain the concerns of those who worry about his capacity to handle a demanding general-election campaign against Donald Trump.”

“Meanwhile, over the two debate nights, the three candidates closest to Biden in the polls — Sens. Elizabeth Warren, Bernie Sanders, and Kamala Harris — reaffirmed their commitment to progressive positions, on issues from health care to immigration, that surveys show face opposition from a clear majority of Americans.”

“The president’s ability to nominate judges to lifetime appointments on the federal courts never came up during the two nights of debate this week involving the Democratic candidates,” the Washington Post reports.

“Over those same two days, the Senate confirmed 13 of President Trump’s judicial nominees, giving Republicans a remarkable 144 judicial appointments since his inauguration, allowing him to reshape the courts and their decisions for decades.”

“Lewandowski ran Trump’s presidential campaign in 2016 for a time and has remained close to Trump throughout the president’s first years in office.”

“Facebook said it had found evidence of something cyber security and national security experts have long suspected: people tied to the government of Saudi Arabia have been running covert campaigns on Facebook and Instagram in a bid to prop up support for the kingdom and attack its enemies,” CNN reports.

If progressives are going to try to beat Biden by going after the Obama presidency, Biden will be the nominee and soon. Like, he will sweep all the early states. Because to the vast majority of Democrats, like 97% of them, Obama was the best President since FDR and is highly approved of.

Frank Rich: “After his previous appearance, the bar was so low for Biden that he would have had to have a major senior moment to not be seen as making some kind of comeback. (He did flirt with disaster at the final moment, when he seemed to conflate his campaign’s text address with a website.) Beto O’Rourke’s devolution into the Incredible Shrinking Man is almost poignant and verging on the troubling. Pete Buttigieg must stop reminding everyone how young he is, especially when it takes the form of a humblebrag that he was still in high school himself when high-school students were slaughtered at Columbine. With an assist by CNN moderators, the unemployed John Delaney, who has zero chance of ending up on the ticket, grabbed the role of centrist challenger to the party’s left on night one, effectively ending what was likely Amy Klobuchar’s last shot at mounting a challenge to Biden for that slot. A wish list: (1) Candidates with no wit resist delivering scripted lines that aren’t clever in the first place — “You might as well FedEx the election to Donald Trump” (John Hickenlooper); “The first thing that I’m going to do when I’m president is I am going to Clorox the Oval Office” (Kirsten Gillibrand). (2) Everyone stops telling patronizing and pandering anecdotes about “everyday Americans” (as the Hillary Clinton campaign at one point labeled them) they meet on the campaign trail. (3) Marianne Williamson usurps Bill de Blasio as mayor of New York.

What’s obvious to all is that the field cannot be winnowed down a minute too soon. The time has come for the week’s best debaters, Elizabeth Warren and Bernie Sanders, to stop acting like a tag team and start drawing sharp distinctions (besides personality) between themselves. One or both of them must face off with the last centrists or sort-of centrists standing: most likely, Biden, Kamala Harris, Buttigieg, and (possibly) Cory Booker. Until then, we can discount most of the noise, including the swelling pundit chorus whining, “OMG, the Democrats don’t have a candidate who can take out Trump!” Reality check: It is August 2019.“

New York Times: “Candidates will need to have 130,000 unique donors and register at least 2 percent support in four polls. They have until Aug. 28 to reach those benchmarks.”

“These criteria could easily halve the field: The first two sets of debates included 20 of the 24 candidates, but a New York Times analysis of polls and donor numbers shows that only 10 to 12 candidates are likely to make the third round.”

Politico: “Among those on the retirement watch list include older members, like Hal Rogers of Kentucky, Jim Sensenbrenner of Wisconsin and Don Young of Alaska; moderates, like Fred Upton of Michigan and Greg Walden of Oregon; lawmakers facing tougher races, like Texans Michael McCaul and Kenny Marchant, and Ann Wagner of Missouri; and the two members under indictment, Duncan Hunter of California and Chris Collins of New York.”

Washington Post: “These retirements by influential Republicans suggest that there is increasing doubt about whether they can defy history and become the first caucus to flip the House majority during a presidential election since 1952. If he had stuck around, Conaway had a chance to become the top Republican on the Intelligence Committee, while Bishop is near the top of the Armed Services Committee.”

“The unspoken fear among Republicans is that more retirements could be on the way, particularly over this long recess as members of Congress spend time with their families, travel their district or make official overseas trips.”

“After two sets of Democratic presidential debates, it appears that Joe Biden and Elizabeth Warren, at least at the moment, are two high-speed trains on a collision course,” Reuters reports.

“Both nights made clear that the ideological divide that is fissuring the Democratic Party will not soon be closed – and that voters may soon have to choose a side as the field begins to narrow in the coming months.”

“The party chairwoman choked up as she kicked off a closed-door panel discussion on WinRed by addressing ongoing rumors that she and other RNC officials are poised to personally benefit from the new platform. At one point, McDaniel said the only money she is making is her RNC salary.”

“Republican leaders are determined to make WinRed the sole online donation platform for the party, and they are taking an uncompromising approach with those who’ve been reluctant to get on board with the new program — which has rankled segments of the party rank and file.”

Playbook: “Frustration and skepticism about WinRed, and questions about who is profiting from the GOP fundraising platform, are probably among the top things Republicans talk about on Capitol Hill.”

Tom Steyer is airing an ad centered around President Trump’s record as “failed” businessman during “Fox and Friends” and “The Sean Hannity Show” on Fox News, The Hill reports.

Said Steyer in the ad: “Unlike other candidates, I can go head to head with Donald Trump on the economy and expose him for what he is — a fraud and a failure.”

“So as we wait to see what effect Tuesday and Wednesday night’s debates have on the race for the Democratic nomination, don’t necessarily assume that changes we may see are permanent — if changes occur at all. To our eyes, we didn’t see much from the debates that seems likely to fundamentally alter the race.”