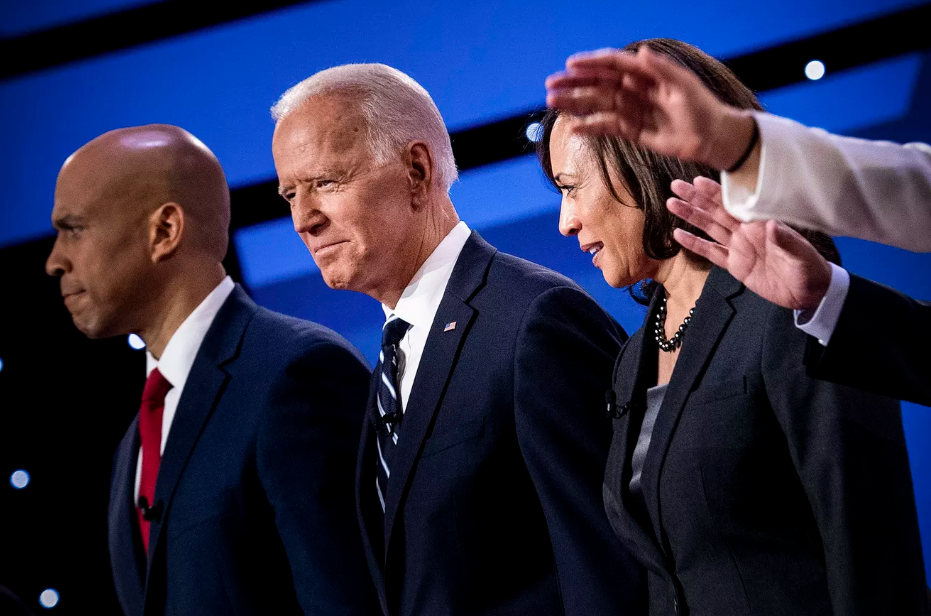 Wow, Biden actually won a debate. It wasn’t a decisive knockout. It wasn’t a landslide. He still had worrying moments (i.e. Joe30030). But not only was he better prepared this time, he was much less rusty, and actually was on the offensive.

Biden, as the frontrunner, was the focus of attacks by Harris, Booker, Castro, Inslee, Gillibrand and de Blasio, but he handled it reasonably well. In one instance, when Gillibrand launched a much telegraphed attack on him for an op-ed he wrote in the late 70’s or early 80’s, he not only repelled the criticism well but also made Gillibrand look like the fool she was for making it, and then when Harris tried to rescue Gillibrand, it boomeranged on her as well.

Harris was also the target of the underdogs. Tulsi Gabbard eviscerated her on her AG record and Harris did not respond well. She will not gain any ground after this debate.

Julian Castro deserves to be in the next debate. He and Booker are the best of the also rans. He forcefully and convincingly argued for impeaching Trump. He also gets points for referring to Sen. Mitch McConnell as “Moscow Mitch.” That wins me over.

John Harris at Politico: “Biden was not that bad. . . and not that good”: “Yes: Joe Biden for the most part was crisper, more engaged and engaging, in Detroit on Wednesday night than he had been in Miami a month ago. No: He did not summon a performance so commanding as to demand people view an old man in new light.

“If Biden is the essential variable in the Democratic presidential race — none of the nearly two dozen other candidates can rise much further unless or until Biden is perceived to be in a dying fall — then the most reasonable reaction to the latest two-day pair of long and crowded debates is: So what?

“That is not so much dismissive comment as authentic question. Biden’s two debate outings this summer suggest that a politician who has been at this game for decades operates within a predictable and fairly narrow range — at his best, not half-bad; at his worst, pretty bad for a supposed front-runner.”

Josh Marshall: “On balance I thought [Biden] had a pretty good debate. He was much more focused and aggressive than he was in the first debate. He got hit from all sides but he hit back and often effectively. […] Biden basically didn’t engage on the debates on health care, immigration and other issues as they’ve existed in much of this campaign – debates which have focused on candidates trying to outdo each other on Medicare for All or decriminalizing border crossings. He detailed his position on both issues but he was focused on a general election audience and a general election campaign.

Harris seemed to lose the thread early in the debate and seemed unprepared and at some level pissed to see so many candidates attacking her at once from so many different directions. She closed well. But it was a generally so-so or weak performance for her.

I was again impressed by Cory Booker. He’s consistently really good in these debates – not only finesse and image but in substance and policy detail. He was just a lot more together than almost anyone else on stage. So far, it simply hasn’t gotten him anywhere in public support.”

Dan Balz: “By the end of the evening, the candidates had done as much to make a case against one another as against the president, without offering much in the way of an aspirational message or connecting directly with the voters they will need to win the presidential election.”

John Harris: “Put a bunch of Democrats on the stage and they can’t help but go off the rails: They compete with each other to win the favor of liberal activists, and saddle themselves with unrealistic positions that could leave a nominee vulnerable in the general election.”

“That was a prevailing Washington media and political class narrative after the first round of Democratic debates in Miami a month ago. But as Democratic contenders gather on the stage again this week, a competing analysis is gaining power: Going a bit off the rails may be an entirely reasonable track to victory.”

Said pollster Stan Greenberg: “Candidates who look like they are cautious, modulating, have their foot on the brake, are missing the moment.”

“The moment, according to Greenberg’s polling and focus-group work, has left voters of all stripes clamoring for disruption. Cultural and ideological currents in society—more profound than any given day’s Trump uproars—are giving progressives a better opportunity than they have had in decades to play offense.”

“So far, a new HuffPost/YouGov poll finds, the answer is no. Views of the Democratic Party, in fact, haven’t really budged in more than four years. The share of Americans calling the Democrats ‘too extreme,’ which stood at 41% in November 2014, now stands at an identical 41%, with only minimal fluctuation in the interim.”

Jason Steinhauer: “Technically, electability simply means an ability (or the perceived ability) of a candidate to win the general election — that is, to earn a majority of the electoral college votes.”

“But at its heart, ‘electability’ is a strategy employed by the party that prioritizes party victory over any one particular candidate or an ideological agenda. Certain candidates may appeal to particular factions of a party, but not all can deliver enough states to win the White House. An electability strategy assesses the realities of the electoral map, and attempts to put forth a candidate who can deliver the right mix of states and votes that will best assure victory for the party.”

“This strategy empowers the party structure, of course, and disadvantages those who may seek to upend it. But it has succeeded in putting forth successful candidates during contentious elections. In fact, Abraham Lincoln — arguably the most significant president in our nation’s history — won his party’s nomination and ultimately the White House on the back of his ‘electability.’”

James Hohmann: “Warren was aggressive about forcing her way into the fray, and she was rewarded with more speaking time than anyone else. Her background as a onetime Oklahoma state champion high school debater shone through repeatedly. She was most disciplined about sticking to her script and delivered well-rehearsed lines in a way that didn’t make them sound canned. She also did a better job than the others onstage of telling anecdotes to humanize policy debates.”

“She espouses essentially the same ideas as Sanders but makes them sound less radical. For this reason, Warren remains an existential threat to his candidacy. Sanders advisers are loath to acknowledge this reality, even privately.”

A new Economist/YouGov survey finds 48% of respondents said they would vote for Democrat for Congress next year, while 37% would vote for a Republican and 11% were not sure.

Sen. Bernie Sanders has raised more than $1 million for his presidential bid since he sparred with several moderate contenders during Tuesday night’s Democratic debate, The Hill reports. The $1.1 million fundraising haul was bolstered by more than 70,000 donations.