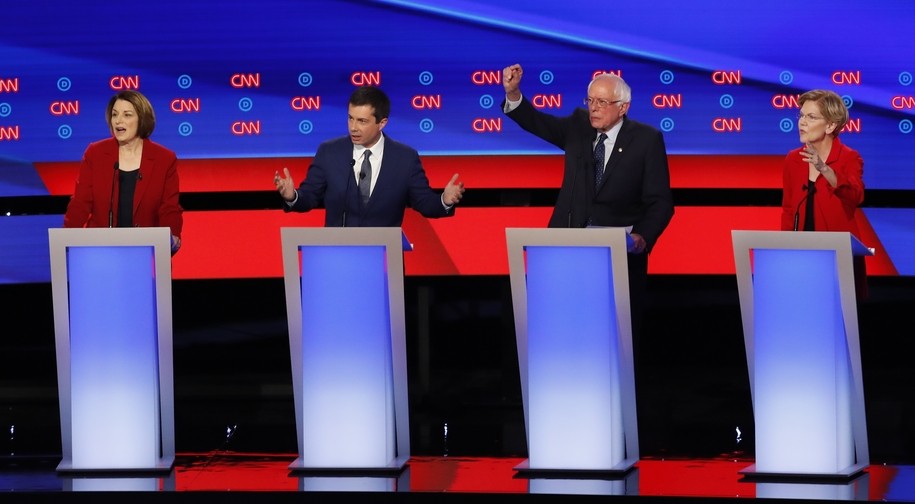 A decent debate actually brought between Bernie Sanders and Elizabeth Warren and the four white Democratic moderate clones hoping to be the understudy for Joe Biden (John Delaney, Steve Bullock, Tim Ryan and John Hickenlooper). The clear winner was Warren with Sanders as the runner up. He gets knocked down a notch because he has yet to figure out that there are other octaves to the human voice other than yelling.

Warren ended the campaign of John Delaney and really all the moderate naysayers who are at 2% or less in the polls with one sentence, while at the same time capturing the number one complaint that progressives and liberals have made against the Democratic establishment for over 30 years: “I don’t understand why anybody goes to all the trouble of running for president of the United States just to talk about what we really can’t do and shouldn’t fight for.”

That clip was the memorable line from the night and Warren will get a polling boost from it.

Two candidates, Pete Buttigieg and Beto O’Rourke, were not really part of the progressive v. moderate fight, mostly because they both are hard to categorize on that spectrum. I thought both did well, and Beto did much better than his first debate performance. If this was a single elimination playoff game between them, then Pete would have won.

Candidates that should run for Senate in their respective states: Bullock, Hickenlooper, Beto.

New York Times: “On an evening that could have produced explosions in their own political rivalry, Sens. Bernie Sanders and Elizabeth Warren instead formed something of an ideological tag team to defend their shared agenda, above all on health care. Though each is seen as the other’s chief obstacle in the Democratic race, Mr. Sanders and Ms. Warren did not at any point clash directly.”

“Instead, they battled an array of comparatively obscure candidates who used the debate as an opportunity — and for some of them, likely a last chance — to express alarm about their party’s embrace of immense liberal policy goals, like the creation of a ‘Medicare for all’-style health care system, Mr. Sanders’s No. 1 issue, and a broad liberalization of the immigration system.”

Dan Balz: “Warren and Sanders more than stood their ground during two spirited hours of sharp and passionate exchanges.”

Washington Post: “Ten more candidates, including former vice president Joe Biden, are scheduled to appear on the stage Wednesday, on the second night of this round of debates hosted by CNN. Yet Biden, whose lead in the polls has been one of the most enduring aspects of the Democratic primary contest, was not mentioned by name Tuesday night. Instead, other moderates were used as stand-ins for some of the ideas he espouses.”

John Harris: “The assignment of Bernie Sanders and Elizabeth Warren to the same debate stage in Detroit Tuesday night was random chance, but turned out to be a well-timed and clarifying event. There was the possibility that the two heroes of the left would sharpen the differences between them in the competition over who is the fairest of them all. But very little of that came to pass.”

“Instead, the combined Warren-Sanders presence emboldened most other voices in the first round of a two-night debate to say they wouldn’t enter the derby over who is most ideologically pure. The real argument, they urged, should be over who is most credible general election adversary to Donald Trump and potential president in 2021.”

“It wasn’t exactly an invigorating evening.. But in its discursive way it was illuminating: The debate showed a party arguing seriously about the inherent tension between boldness and realism, passion and prudence, on such topics as improving health care, immigration, taking on wealthy interests, and the best way broadly to energize average voters.”

Josh Marshall: “On balance, I would say Warren was the big winner of the evening. I continue to think and worry that her embrace of Medicare for All, with a deep clarity about the prohibition of private insurance, could be a major electoral liability if she becomes the nominee. But to me she had a clarity and energy that owned the stage. She had directness, moments of memorable humor and compelling explanation. I didn’t think she did as well in the first debate as some others did. In this case I think she had a very strong night.

Sanders clearly sees that he’s not and can no longer run a frontrunner’s campaign. He has to dig in and fight for it. He was more declarative and thundering, a bit more the genuine article. He had crowd pleasing moments. Here’s a selection of his punchy one-liners and punchy moments. But I didn’t see anything that would make him break the trend that is moving toward Warren. This may partly be the skeptical prism through which I view Sanders rather than the particulars of this debate. You can decide. But that’s my take.

I don’t have terribly strong thoughts about the other contenders on the stage. I don’t think any of them are really significant players in the race. That applies to Pete Buttigieg, who I admire a great deal. But his campaign seems to have stalled.”