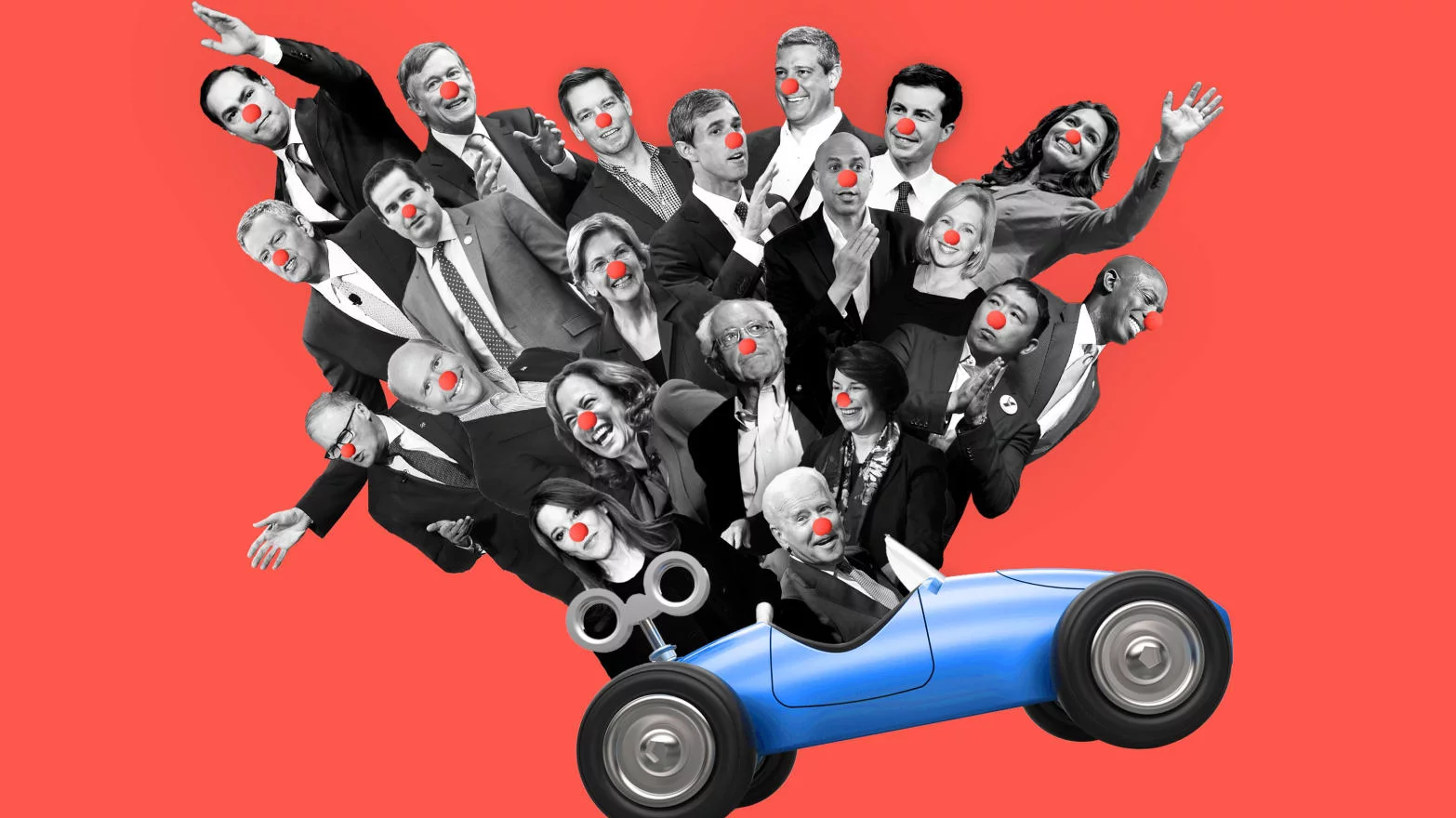 A new Emerson poll finds Joe Biden leads the Democratic field with 33%, followed by Bernie Sanders at 20%, Elizabeth Warren at 14%, Kamala Harris at 11%, Pete Buttigieg at 6% and Beto O’Rourke at 4%.

Politico: “Democratic presidential candidates took one big lesson from their first debates in June: The contenders who shined brightest attacked other candidates onstage. Now, they are all preparing to trade punches ahead of round two in Detroit.”

“Across the Democratic presidential field, candidates are reading up on points of contrast with key rivals and preparing attack lines, while some are going a step further and simulating debate-stage cross-talk with staffers, practicing ways to butt into the conversation and create a memorable moment. Campaigns are studying how CNN handled past primary debates, when the hosts teed up opportunities for GOP candidates to criticize each other in 2015.”

Rick Klein: “Two progressive powerhouses will be center stage for night one of the second Democratic debate on Tuesday. The party will be watching for Sen. Bernie Sanders and Sen. Elizabeth Warren to mix it up, knowing that they’re treading in the same ideological territory.”

“But the two New England senators are longtime allies who don’t actually disagree on very much. The real action in Detroit could come from podiums closer to the wings, where a group of relative moderates — including several who are unlikely to qualify for future debates, minus a big splash — stand ready to bring the fight.”

Kamala Harris is in third place in all three of the early voting states.

Also interesting: “In each of the three states, likely primary voters reported Kamala Harris and Elizabeth Warren as their favored second choices. As we see in a closer look at Iowa, Warren remains a favorable second choice option to supporters of Sanders, Harris, and Biden while Harris is a popular second choice to Warren and Buttigieg voters.”

Playbook: “Democratic ad maker Mark Putnam has cut the first paid adfrom the hearings, funded by Tom Steyer’s Need to Impeach, a spot that’s going to grab many eyeballs in the coming days. The group is spending in the mid-six figures to air the ad on CNN and MSNBC before and after the second presidential debate (which airs tonight and Wednesday night on CNN live from Detroit). Needless to say, this is prime time for millions of politically active TV viewers.”

A new University of Texas poll finds Beto O’Rourke leads the Democratic presidential field in his home state with 27%, followed by Joe Biden at 24%, Bernie Sanders at 15%, Elizabeth Warren at 11%, and Kamala Harris at 9%.

Key takeaway: “Independent Democratic-learners (especially women) are a key to O’Rourke’s success in our poll. When included, these voters expand his lead to 38% among primary voters (with Joe Biden receiving 19% support), though they are also the least likely to be enthusiastic about participating in the March primary (only 19% are “very” or “somewhat” enthusiastic about the race).”

“Many professional, suburban women — a critical voting bloc in the 2020 election — recoil at the abrasive, divisive rhetoric, exposing the president to a potential wave of opposition in key battlegrounds across the country,” the AP reports.

“In more than three dozen interviews… with women in critical suburbs, nearly all expressed dismay — or worse — at Trump’s racially polarizing insults and what was often described as unpresidential treatment of people. Even some who gave Trump credit for the economy or backed his crackdown on immigration acknowledged they were troubled or uncomfortable lining up behind the president.”

“The interviews in suburbs outside Philadelphia, Milwaukee, Detroit and Denver are a warning light for the Republican president’s reelection campaign.”

Politico: “Tom Steyer launched his 2020 campaign a little over two weeks ago and plans to self-fund his White House run with $100 million of his own money. But he still needs 130,000 people to donate to him by August 28 (and get at least 2 percent in four polls) to qualify for the third primary debate.”

“The bars imposed by the DNC pose a major test of whether Steyer’s message and his millions can actually attract enough support for a viable presidential campaign — and fast. Just days out of the gate, Steyer’s campaign has no grassroots fundraising base of its own and is competing for votes with candidates who have been in the race for months. So Steyer is flooding Facebook and Google with ads — at least $927,000 worth so far — trying to buy up new donors and airing over $4.3 million on TV spots that could give him a boost in the polls.”

White House hopeful Andrew Yang announced Monday that he has reached the thresholds to qualify for the third and fourth Democratic primary debates, The Hill reports.

Candidates have to amass 130,000 unique donors and receive the support of at least 2% of respondents in four qualifying polls to appear in the third debate on Sept. 12 and Sept. 13.

“House Republicans plotting to win back their majority in Congress fear they are on the brink of a massive wave of retirements that could force them to play defense in a high-stakes presidential election year,” The Hillreports.

“Three House Republicans said last week they would not seek another term next year, catching party strategists off guard. Those announcements came earlier than in a typical election cycle, when members who are ready to hang up their voting cards usually wait until after the August recess or after the Christmas break.”

Rep. Rob Bishop (R-UT) told the Deseret News that he will not run for re-election next year. That’s four Republicans retiring just in the last week. I guess having to be a racist in order to be a Republican is too much for some.

A new Quinnipiac poll finds that American voters think President Trump is a racist by a 51% to 45% margin.

Said pollster Mary Snow: “While half of voters think President Trump is racist, religion shows an even bigger divide. Only 21% of white Evangelicals believe the President is racist. Compare that to 63% of voters who don’t affiliate with any organized religion.”

A new Quinnipiac poll finds that voters by a 60% to 32% margin say that Congress should not begin impeachment proceedings against Trump.

Support for starting impeachment proceedings is 61% to 29% among Democrats and 66% to 23% among black voters, but every other listed party, gender, education, age and racial group is opposed.

“But despite signs of tension between the campaigns in recent months, the debate is unlikely to feature a clash between the two for the mantle of the left. Instead, the self-proclaimed longtime friends may be too busy warding off attacks from five more moderate candidates they’ll also be sharing the stage with — all of whom are desperate for a breakout moment.”